What is Google Chrome Operating System?

Google Chrome Operating system is made specifically for notebooks and tablets. It was introduced by Google LLC in 2009. It was created on top of Linux Kernel. It works on the ARM and Intel X86 chips. It is a cloud-based operating system. It has enormous speed. It has very low latency, it means that you do not need to wait for the web or the internet for long to connect. All websites load quickly on this browser. Google Chrome comes with an automatic upgrade system. The upgrades take place when connected to the internet and do not need any manual intervention. Several applications can be opened on Google Chrome using different tabs.

The Chrome Operating System was announced on the 7 th Of July 2009, by Google LLC. The Chrome OS was formerly designed for Netbooks and Personal Computers. The Chrome OS is feasible with the hard disk drives (HDD), but Google had requested its hardware providers for solid-state devices citing better performance and reliability. Matthew Papakipos (engineering director, Chrome OS), in the year 2009, claimed that the Chrome OS used 1/60 part of the space used in Windows OS. In November that year, the open-source project was released as “Chromium OS”. At a news conference, Sunder Pichai, CEO of Google, mentioned that Google would try to reduce the boot time of Chrome which was 7 seconds then.

Google Chrome, is one of the most used browsers in the world today. Apart from being the most famous browser, it is an open-source browser as well.
The people using the computers having Google Chrome, experience ease of use by doing most of their work online on the cloud with very minimal or no need of downloading any programs or applications. The personal computers that use Chrome get several updates and also receive security. The user information is basically stored on the cloud with minimal or no storage of such information on the user’s machine. Working and storing data using Google’s cloud computing services can be done using Google Chrome browser. E.g. Microsoft Office web apps can be accessed using Google Chrome.

The laptops which use the Chrome OS are called Chromebooks. In 2012, Samsung released a desktop design called Chromebox. It was commercially launched in 2015 after the official partnership of AOPEN and Samsung. Chromebase was another Chrome OS enabled device. It was developed by LG Electronics in 2014. It had Chromebox hardware, monitor, camera, microphone, and speakers. In 2015, Chromebit was released. It is an HDMI Dongle that runs Chrome OS. It converts a computer monitor or TV display into a personal computer.

The updates to the software have a limited lifespan. The end-of-life span of the software is mentioned on the “About Chrome OS”-” Additional Details”. All the software developed from 2020 would have a lifespan of at least 8 years.

Applications of the Chrome OS

Architecture of the Chrome OS

The Chrome OS is built on the Linux kernel. It has a three-tier architecture comprising firmware, browser and window manager, and system-level software and userland services. Firmware is responsible for the quick booting. It also manages the recovery and verifies each step in the booting process thereby, providing security. System-level software is used for enhancing performance while booting. The Userland services have only essentials, that can manage programs in parallel, and delay services in the interest of fast booting. The task of the window manager is to handle user interaction with multiple client windows like other X window managers. 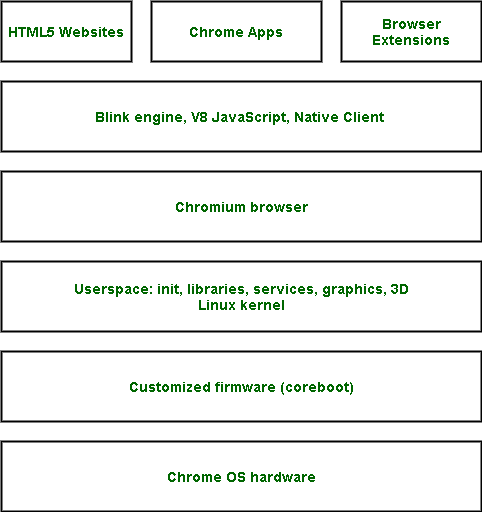 Previous
How to Learn Python in 21 Days?
Next
What is CAPTCHA code?
Related Articles
1. How to Delete Google Chrome Browsing History?
2. How to Disable and Enable JavaScript in Google Chrome?
3. How to Create Tab Groups on Google Chrome?
4. How to block websites on Chrome and FireFox?
5. What are chrome extensions?
6. How to disable JavaScript in Chrome Developer Tools?
7. Create a Crypto Currency Price Tracking Chrome Extension
8. 10 Best Free Chrome Extensions For Content Writers (2022)
9. How to Force Dark Mode on Web Contents in Chrome
10. How to Use Custom Chrome Tabs in Android?
Article Contributed By :