Force, we all are using this word in our daily life, but we might not know that we are using it. So, what is a force? Let me give some examples, Force is pulling or pushing the door, force is kicking a ball, force is pushing a heavy force. Now, these examples are giving us an idea of what a force looks like. Thus, we define force as a pull or push upon an object resulting from the object’s interaction with another object. 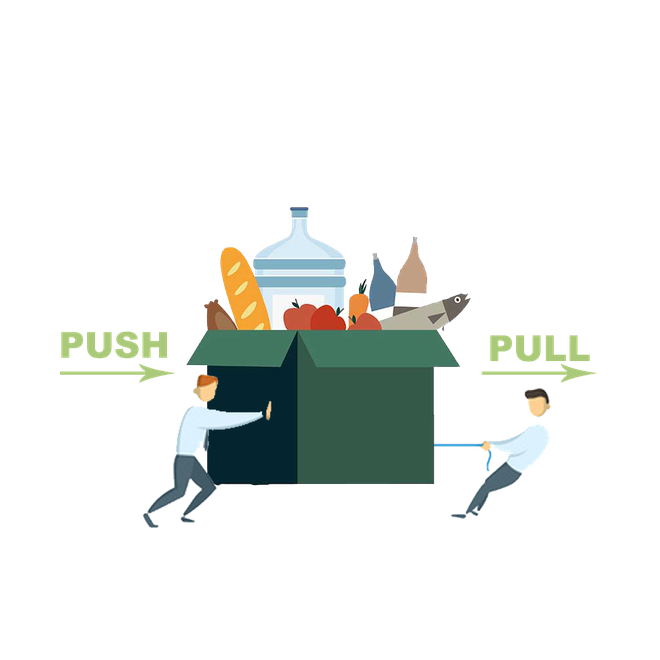 What is Push and Pull?

For example, the force has been described as an interaction that, if unchallenged, alters the motion of an item. When we look attentively at this sentence, we can see the function of push-pull in it.

Force is sometimes simply described as a push or pull on an object as a result of the object’s contact with another object. As a result, any sort of force is essentially a push or a pull. Elastic and spring forces are additional examples of forces. When pushed, it tends to resist and respond or springs back with the same amplitude.

Push is defined as the force that causes an item to move from its resting position.

When compared to the push, the pull is defined as the force that causes an item to move from rest in the opposite direction.

When we analyze a force in a specific circumstance, it can operate as both an internal and exterior force, depending on the system under consideration. This is how we introduced the issue from the beginning, and it stresses the importance of being cautious about the system used when labeling a force as internal or external.

A push or pull of an object is referred to as force in science. Force is created when two things contact. The amount and direction of force are both presents. The magnitude of a force is used to represent its strength. A change in the direction or condition of motion of a body is caused by force.

When a push or pull is exerted on an item, this is referred to as force.

We already know that a magnet can attract iron. As a result, we may say that the magnet attracts the iron piece due to its magnetic force. Similarly, when opposing poles of a magnet resist one other, we may say they are pushing away from each other.

A force can cause an item to move from rest to motion or vice versa. Two or more things must interact with each other for a force to be created. We already know that a magnet can attract iron. As a result of its magnetic force, the magnet draws the iron piece towards itself. Similarly, when opposing poles of a magnet resist one other, we may say they are pushing away from each other.

Different forms of Forces are:

Magnitude and Direction of Force

Furthermore, equal and opposing forces cancel out, thus the resulting force is zero. Force exerted to an item causes a change in velocity as well as a change in shape. Some forces operate on an item by making touch with it, whilst others act without making contact with the object. Touch forces are forces that act when an item comes into contact with them.

A Force can act on an object with or without any contacts. For example, if you are pushing or pulling a door then you must have contact with a door while if you have a bar magnet you can easily attract iron nails without having any contact with the nail. So in science, we have two types of forces, one is contact force and the other is a non-contact force. Let’s see in detail what are they with their examples.

(1) Contact Force: The forces which are applied to other objects only through physical touching is called contact forces. Examples of contact force are: muscular and frictional force.

(2) Non-Contact Force: The forces which are applied to other objects without any physical touching are called non-contact forces. Examples of non-contact force are magnetic force, electrostatic force, and gravitational force. Now let’s discuss types of force in detail:

Problem 1: Explain force with the help of an example.

The force can be defined as a pull or push upon an object resulting from the object’s interaction with another object. e.g. opening or closing a door, kicking a ball, hammering an iron nail.

The forces that are applied to other objects only through physical touching are called contact forces. Examples of contact forces are the muscular and frictional forces.

Problem 3: A boy is applying force, by pushing a box in the west direction. Now in which direction should his friend push the box so that the heavy box moves easily and faster and why?

His friend should also push the box in the west direction to move the heavy box easily, as force applies in the same the direction will increase the magnitude.

Problem 4: Is force is a scalar quantity?

Force is not a scalar quantity. Since it has both direction and magnitude. Therefore, force is a vector quantity.

Problem 5: An apple falls from the tree, which force is responsible for these phenomenons? Define it.

Problem 6: What is the net force? Explain with the help of an example.

The total of all the forces acting on a body is called the net force. For example, if we are pushing a heavy box in the same the direction the resultant force will be added and the box will move easily, while if two-person pushing the same box in an opposite direction then it gets difficult as the resultant forces acting on the force will be the difference between the two forces.

Mathematically we can write,

Fnet = F1+ F2 (when force applying in the same direction).

My Personal Notes arrow_drop_up
Previous
How to Change the Shape of ImageButton in Android?
Next
Creating a C++ reusable Header File and its Implementation Files
Recommended Articles
Page :
How to detect HTTP or HTTPS then force redirect to HTTPS in JavaScript ?
14, Apr 20
How to force a file to get downloaded in PHP?
06, May 20
How to force tab-navigation to stay in place using Bootstrap ?
07, Aug 20
How to force redirect to a particular route in angular?
14, Sep 20
How to Brute Force ZIP File Passwords in Python?
23, Feb 21
How to force ReactJS to re-render on every setState call ?
30, Mar 21
Push and Pull Force
02, Apr 21
How to send PDF in express route response and force browser download ?
26, Apr 21
Work Done by a Variable Force
24, Jun 21
How to force Input field to enter numbers only using JavaScript ?
22, Nov 19
Magnetic Force on a Current carrying Wire
19, Jul 21
Force - Definition, Effects, Types, Sample Problems
24, Mar 21
Force Law for Simple Harmonic Motion
15, Jul 21
What is Magnetism? Definition, Field, Force, Properties
03, Oct 21
Electromotive Force, Terminal Voltage and Internal Resistance
18, Oct 21
What is Nuclear Force? - Definition, Properties, Examples
18, Oct 21
Article Contributed By :