Work and energy are units that are closely associated with one another. In Physics, for 2 objects, the work done is outlined because of the transfer of energy from the primary object to the second object. Also, energy is outlined because of the capability to try to work. Work is believed to be done by a force once an object experiences displacement parallels to the road of action of the force. It’s an activity that has force and movement within the direction of the force. The potential for doing work is what the energy is!

Work done on an entity is defined as the product of the magnitude of the force acting on the body and the displacement in the direction of the force.

W = work done on an entity

F = Force on the entity

s = Displacement of the entity

The angle between force and displacement is 180°.

Two circumstances need to be fulfilled with the work to be done:

Unit of work done = Joule = Newton x meter. 1 Joule work is said to be done when 1 Newton force is applied on an entity, and it shows the dislocation by 1 meter.

The capability to perform work is defined as Energy. Its unit is similar to that of work. SI unit of work or energy = Joule (Nm). Different forms of energy: Light, heat, chemical, electrical or mechanical.

Mechanical energy is the sum of:

Objects in motion have their own energy and are able to do work. This energy is called Kinetic Energy. The K.E. of an object will increase with its speed.

The K.E. of the body moving with a precise rate = work done on that to form it acquire that rate.

To accelerate an object we’ve to use force. To use force, we’d like to try to work. Once work is finished on an object, energy is transferred and also the object moves with a replacement constant speed. The energy that’s transferred is thought of as K.E. Kinetic energy is transferred between objects and maybe remodeled into different varieties of energy. Yo-Yo may be a nice example to explain the transformation of K.E. Whereas getting down to play with it, one starts by holding it rests within the hand, at now, all the energy holds on within the ball in the form of Potential Energy. Once the person drops the plaything the hold on energy is remodeled into K.E., that is that the energy of movement. Once the ball reaches the terribly bottom of the plaything all the energy is regenerated to K.E. Because it moves back to the hand, all the energy is yet again regenerate to P.E. once it reaches the hand.

Derivation of the formula:

Due to force the velocity changes to v, and the acceleration produced is a relation between v, u, a and s = v2−u2 = 2as

The body with an elevated velocity has more K.E. when two alike bodies are in motion.

The net work completed by a moving body can be calculated by finding the change in KE. It is the work-energy theorem.

Derivation of the Work-Energy Theorem:

The work ‘W’ done by the net force on a particle is capable the modification within the particle’s mechanical energy (KE).

Let us take into account a case wherever the resultant force ‘F’ is constant in each direction and magnitude and is parallel to the rate of the particle. The particle is moving with constant acceleration on a line. The link between the acceleration and therefore the internal force is given by the equation “F = ma” (Newton’s second law of motion), and therefore the particle’s displacement ‘d’, is often determined from the equation:

The work of the net force is calculated with the product of its magnitude (F=ma) and therefore the particle’s displacement. Subbing the higher than equations yields:

When the work is done on a body, energy gets stored in an entity. For example, stretching a rubber string. The energy that is possessed by a body under its configuration or change in position is known as Potential Energy.

Gravitational: Energy potential that comes from an object’s height and weight.

Chemical: Energy potential comes from the atoms it contains and the chemical reactions that take place within the entity.

Elastic: Energy potential an object being compressed and stretched.

At a height the potential energy of an object:

Work is done against gravity to alter its position when an entity is raised to a certain height. This energy is stored as Potential Energy.

In the case of rising the elevation, F = mg

Law of Conservation of Energy

Energy can neither be created nor destroyed but can be transferred from one form to another. It is the law of conservation of energy. The whole energy before and after the alteration remains constant.

Proof of Law of Conservation of Energy:

Let from point A, which is at a height h from the ground a body of mass m falls as shown in the following figure: 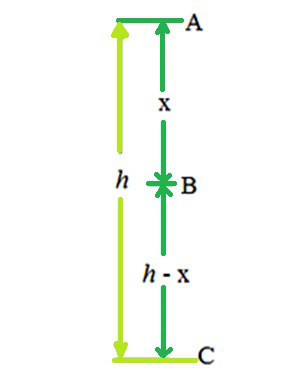 During the fall, after moving a distance x from A, the body has reached B.

Let the velocity at this point be v.

In the end, the body reaches position C on ground.

The velocity of the body is zero here.

The commercial unit of power is kWh i.e. energy used in 1 hour at 1000 Joules/second.

Question 2. Two passengers of mass 40kg each sit in the car then find new kinetic energy of car if mass of car is 700 kg and velocity of car is 18 km/h.

Question 3. Calculate the work done Find the work done by 10N force acting on object at the angle of 60° which displace the object by 10 m.

Question 6. Find the total expenditure if one unit costs 2.75 rupees if four bulbs of 120W and five fans of 130 W each operate for 14 hours daily.