Conductors of electricity are materials that allow electric current to easily pass through them. Electrical conductivity is a measurement of a substance’s ability to enable an electric current to flow through it. Solid metals and graphite are good electrical conductors with a high electrical conductivity. Some liquids are good conductors as well. Water that has been purified or distilled is a poor conductor of electricity. However, even a little amount of contaminants (salts and minerals) makes water a good conductor because it includes ions that carry electricity. As a result, water from taps, wells, ponds, rivers, seas, lakes, and other bodies of water carry electricity due to contaminants. Acid, base, and salt solutions make up the majority of electrically conducting liquids. The molecules in a conducting solution disintegrate into ions when electricity is transmitted across them. Ions are positively or negatively charged atoms or groups of atoms. Electrical conduction occurs in the liquid as a result of these ions. Before we look at what electroplating is, it’s a good idea to review some basic concepts of chemical effects of electric current:

An electrolyte is a substance that transmits electric current by dissociating into positively and negatively charged particles known as ions, which migrate toward and are normally discharged at the negative and positive terminals (cathode and anode) of an electric circuit. Acids, bases, and salts are the most well-known electrolytes, which ionize when dissolved in water or alcohol. When melted in the absence of any solvent, many salts, such as sodium chloride, behave as electrolytes; and some, such as silver iodide, are electrolytes even in the solid state.

An electrode is a solid electric conductor that conducts electricity through nonmetallic materials, liquids, gases, plasmas, and vacuums. Electrodes are usually good conductors of electricity, but they don’t have to be made of metal.

The direction in which a cell functions determines whether an electrode is a cathode or an anode.

When a cell switches from acting galvanically (that is, producing energy like a battery) to electrolysis (that is, receiving energy), the cathode becomes the anode and vice versa.

In order to refine and extract metals from impure samples, electrolysis is utilized. This is referred to as electrorefining. It can also be used to cover one metal with another metal.

Plating a metal onto another by hydrolysis, usually to avoid metal corrosion or for ornamental purposes. An electric current is used to reduce dissolved metal cations, resulting in a thin, coherent metal coating on the electrode, which is also the main principle of electroplating. In the electrical oxidation of anions on a solid substrate, such as the production of silver chloride on silver wire to make silver chloride electrodes, electroplating is frequently used.

Electroplating is mostly used to change the surface properties of an object (for example, corrosion resistance, lubricity, and abrasion resistance), but it can also be used to add thick

or create objects by electro shaping. 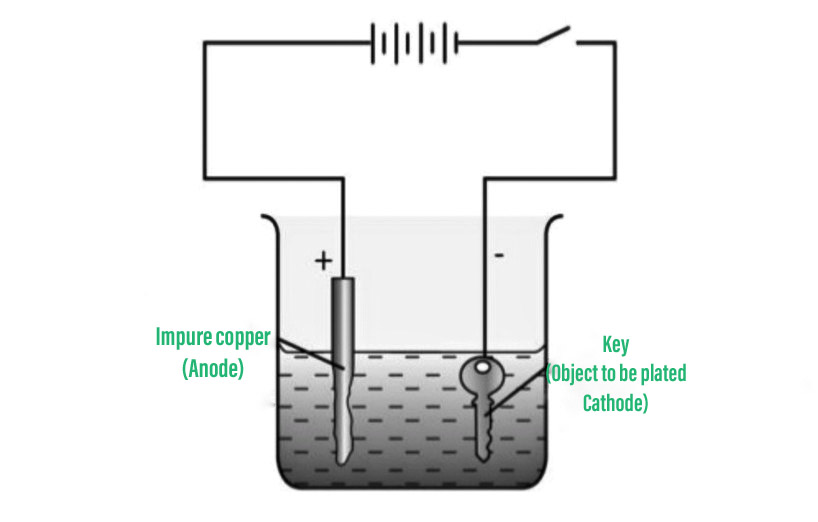 let’s take an example of a gold coating. In this instance, a layer of gold is to be electrodeposited on metallic jewellery to enhance its appearance.

The dissolved ions of gold are reduced at the cathode and plated on the jewellery.

The plating is influenced by a number of significant elements. These are some of them:

Ques 1. What exactly is the point of electroplating?

Electroplating is the hydrolysis-based plating of one metal onto another, most typically for ornamental purposes or to prevent metal corrosion. Copper plating, silver plating, and chromium plating are examples of specific forms of electroplating. Manufacturers can use low-cost me

Applications of electrolysis are:

Ques 3. What is chromium plating and how does it work? Which of chromium’s properties makes it suitable for electroplating?

The chrome plating process is an electroplating method for depositing a thin layer of chromium onto a substrate (metal or alloy).

Electroplating is accomplished by sending an electric current between two electrodes immersed in a chromic acid electrolyte bath. The substrate to be coated will be one of the electrodes. Chromium atoms are deposited in a layer on the electrode to be plated during the flow of electricity between the two electrodes.

Chromium is a corrosive-resistant metal, but other metals, such as steel, corrode readily when exposed to damp air.

Ques 4. What are the advantages of electroplating

The following are some of the benefits of this method:

1)Corrosion resistance: a corrosion-prone substance, such as iron, can be protected by a coating of non-corrosive material.

2)Decorative items: otherwise dull surfaces can be given a gleam and sheen. This can be used as a decorative piece.

3)Less expensive decorations: instead of utilizing gold or silver, ornaments can be made out of less expensive metals and then electroplated with gold. This significantly lowers the cost of ornaments.

Ques 5. What are the disadvantages of electroplating?

The following are some of the cons of this method.

Ques 6. What factors have an impact on electroplating?

A number of things have an impact on this procedure. Surface area of the electrodes, temperature, kind of metal and electrolyte utilized, and amplitude of applied current are only a few of these variables.