Dicot root is a taproot structure, meaning they have a single thick root with lateral branches, and they go deep inside the soil. The cross-over part of the dicot root shows the accompanying arrangement of the course of action of tissues from the fringe to the middle. 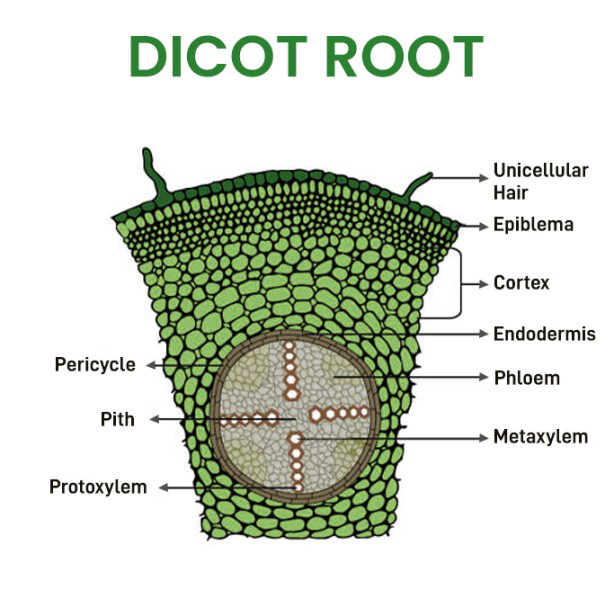 All the tissues present inside the endodermis involve the stele.

The pericycle is by and large a solitary layer of parenchymatous cells, saw as internal to the endodermis. Horizontal roots begin from the pericycle.

Vascular tissues are in an outspread course of action. The tissue by which xylem and phloem are isolated is called conjunctive tissue. Xylem shows exarch and tetrarch conditions. Metaxylem vessels are for the most part polygonal.

The xylem is completely situated in the dicot root, and heaps of phloem are organized around it, isolated from it by the vascular cambium. At the point when cells of the vascular cambium partition, they separate into auxiliary development xylem and phloem, which builds the bigness of dicot roots and stems.

It is uniseriate, dull, meager walled, and without intercellular spaces. The epiblema produces unicellular root hairs. Stomata and fingernail skin are missing.

It is slender walled and produced using polygonal or round parenchymatous cells that typically have intercellular spaces. It is answerable for the transportation of salts and water from root hairs to the focal point of the root.

It is made of barrel-molded minimal parenchymatous cells and gas both entry cells and Casparian stripes. This locale permits the outspread dispersion of water and minerals through the endodermis.

It is made out of an uniseriate layer of parenchymatous cells without intercellular spaces. Sidelong meristem and parallel roots develop from the Pericycle area.

It is halfway found and is tiny and is made of polygonal parenchymatous cells. It capabilities as a stockpiling unit of food.

The foundations of gymnosperms and most dicotyledons go through optional development. The vast majority of the dicot establishes show optional development in thickness, like that of dicotyledonous stems. Some dicot roots don’t show auxiliary development. The optional vascular tissue begins because of the cambial hole. The phellogen leads to the periderm. Vascular cambium is a plant tissue situated between the xylem and phloem of a vascular plant. It comprises parenchymal cells between the vascular tissue and form the pericycle.

Question 2: How is a cambium ring formed in a dicot root?

Question 3: Which type of vascular bundles is in dicot roots?

Question 4: How many tissues are present within dicot roots?

Dicot establishes to have xylem in the focal point of the root and phloem outside the xylem. Phloem is encircled by the pericycle followed by endodermis. Pericycle is made up parenchyma cells and sclerenchyma cells. The cortex is the external layer of the dicot root. Cortex comprises epithelium cells. Essence is missing in it. Subsequently, complete 5 kinds of tissues are available inside dicot root.

Question 5: Which layer of the dicot stem is impermeable?

Dicot plants have the taproot framework. The peripheral layer is known as the epidermis. The epidermal cells now and again project out, which show up as the root hairs. The epidermis is trailed by the complex cortex, approximately made of parenchyma cells with intercellular spaces.

Question 6: Does dicot root have a bundle sheath?

Group sheath is a cell layer in plant leaves and stems that frames a sheath encompassing the vascular packs.

In C4 plants, the group sheath cells contain chloroplasts and are the site of the Calvin cycle. The underlying obsession of carbon dioxide to shape malic corrosive happens in the palisade mesophyll cells, which is C4. Plants structure a circle around the group sheath. This course of action, known as ‘Kranz life structures’, guarantees that the palisade cells are in close contact with the pack sheath cells so that the malic corrosive can undoubtedly pass to the group sheath. Sclerenchymatous group sheath is available in monocot stem and missing in dicot stem. In dicot stem pack cap is available, all things being equal.