What is DAT(Digital Audio Tape)?

DAT (Digital Audio Tape) is an electronic cassette that has a background recording facility and playback singing medium. It is similar to a compact cassette, but it has the main difference. Earlier tapes were analog, but DAT is digital. Unlike standard tapes, digital tapes do their work in only one direction. The DATs can record multiple vibrations or rates than CD, which can be higher or lower. Consumers took it pretty casually, and its market produces the right amount of revenue. 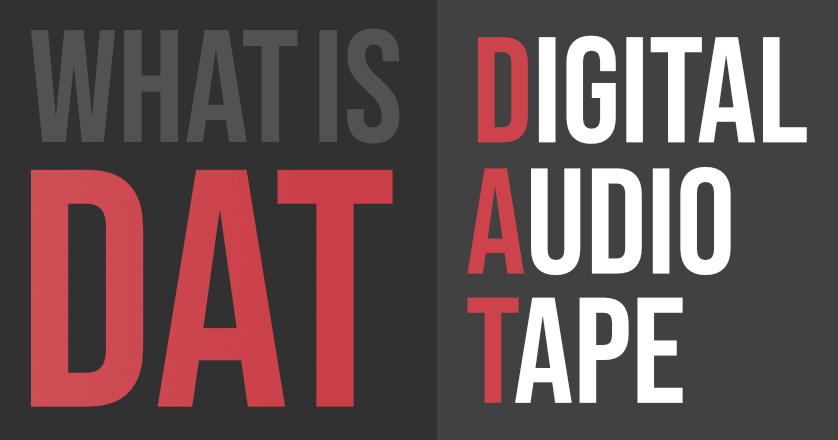 A Digital Audio Tape is a digital recording device that was brought to the market by SONY Inc. At that time, SONY has a significant amount of developers and the privilege to produce new electronic stuff. So actually the idea and technology for creating Digital Audio Tape were inspired by Video recorders that use a rotating head and a helical scan to record data. These have an extraordinary effect on DAT as the scanner protects from being physically edited. The Digital Audio Tape supports a variety of modules starting from 32 kHz to 44.1 kHz. It also allows a quite extensive range of recording hours from 6 to 12 hours. The Digital Audio Tape has a range of 15 to 180 minutes in length.

The Digital Audio Tape was not the first digital one. Japan has started using Pulse Code Modulation for the production of analog phonograph records. But the biggest demerit of Denon productions was that the product was not consumer made. It was for only professional and testing purposes.

DAT became very popular in only a few days of its release. People started learning and using the tape. Its uses vary from place to place and also according to situations. There are several situations where digital audio tapes come into the role.
Firstly comes the place where DAT belongs, which is the recording industry. The industry uses these tapes for their professional uses. The Digital Audio Tapes is used in audio and all digital production chains. These are linked to multi-track recorders and mixing consoles which are handled digitally.
This revolution was only the starting of DAT. The professionals and music artists also started to take it into their lives. Starting from Band Artists to individual music producers, all started to release their records on DAT.
Not only the Digital Audio Tape became popular among artists, and music composers but also ordinary and amateur people also started using that tape for their refreshment. As DAT is taking his profit graph to the next level People started using to record their voices and listen to them. Despite being expensive, people enjoy the services. The compensation was due to the release of records by famous artists at that time.
DAT also started growing its business in a related technology industry. At that time, the storage problem was a significant issue. But the role and efficiency of DAT solved this problem. DAT becomes a sequential-access medium and a place to store data and information. The Digital Audio Tape also started working as a backup medium for all tech users. It had backup storage of 80GB depending on standard and compression.

When the central concept of Digital Audio Tape landed on the world, and its forum, many people and inventors as well as tech people started thinking beyond the capability of DAT. As these audiotapes have specific weaknesses, the advanced versions tried to solve the problems. There are many types of mods of DAT like ADAT, Digital Audio Stationary Head, Digital Data Storage (DDS), Magnetic Storage, Magnetic Tapes or MiniDisc.

How does DAT work?
The answer is not so hard. The technology used is brilliant and witty. As we know that things are continually evolving, but DAT used the concept of video recorders. DATs concept of using helical scans and rotating heads was quite impressive. To convert in real-time from hard drive to tape, it uses this concept. DAT uses a variety of modes for different situations. They have ranges starting from 32 to 44.1 kHz. DAT mostly works on extending the bit rates and bandwidths. All styles of DAT supports two-channel stereo recordings. The Digital Audio Tape records the wavelengths and vibrations, which are digital. Finally, DAT converts the disks to its numeric equivalent for playback and storage.

So as a result of this we can say by looking at all options DAT or Digital Audio Tape was the most significant discovery of all time. It changed the culture of the music industry and the life of the people.

My Personal Notes arrow_drop_up
Previous
Number of ways to color boundary of each block of M*N table
Next
Matplotlib.artist.Artist.get_rasterized() in Python
Recommended Articles
Page :
Magnetic Tape memory
27, Apr 20
How to Add Audio to Powerpoint Presentation
26, May 21
HTML | DOM Audio Object
13, Feb 19
How to autoplay audio on chrome ?
05, Jun 20
How to record and play audio in JavaScript ?
24, Jun 20
How to Play and Record Audio in Python?
13, Jan 21
How to get the duration of audio in Python?
23, Feb 21
How to preload an audio in HTML5 ?
15, Mar 21
Splitting stereo audio to mono with PyDub
16, Mar 21
How to add controls to an audio in HTML5 ?
22, Mar 21
How to toggle play/pause in ReactJS with audio ?
19, Apr 21
Audio and Video Conferencing
12, Jun 21
Article Contributed By :

Complete Interview Preparation
View Details
System Design-Live Classes for Working Professionals
View Details
Data Structures & Algorithms- Self Paced Course
View Details
Most popular in Digital Electronics & Logic Design
Most visited in Write From Home
We use cookies to ensure you have the best browsing experience on our website. By using our site, you acknowledge that you have read and understood our Cookie Policy & Privacy Policy