What is Data Transfer Rate?

Data Transfer Rate (DTR) can be defined as the ratio of the total amount of digital data transferred between two points in some defined period of time. Where the two points can be two network components say two computers or data can be transferred between a thumb drive and a hard drive. Data transfer rate is actually a measure of the speed at which network components can exchange data(send or receive). It is measured in either bits per second or bytes per second. For practical purposes, it is measured in Megabits per second or Megabytes per second. But you have usually seen KBps (Kilobyte per second) while uploading or downloading something. Japan has shown the highest data transfer rate of 14 terabits per second using only a single optical fiber cable.

Some data transfer rate units are: 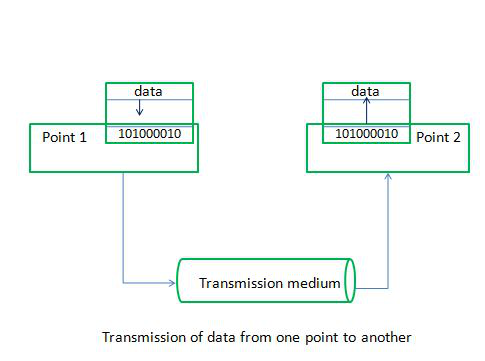 Importance of data transfer rate in the computer network:

Data transfer rate is of utmost importance in today’s world because of the following reasons:

There are several factors that affect the data transfer rate, some of them are:

2. Condition of Client or Server: It means the client or server should be in a good condition meeting all the criteria for making a better network. It should have all the necessary hardware along with the latest software. The data transfer rate will surely be affected if the minimum processor, RAM, and other components are not fulfilling the defined minimum requirement criteria. Suppose for achieving a data transfer rate of X KBps we need a minimum of 4 GB ram and an octacore processor if these criteria are not fulfilled then the data transfer rate will get affected.

3. Latency: Latency is defined as the amount of time needed by the network to transfer a data packet from source to destination. If latency is affected by one or more parameters then in turn it will affect the data transfer rate. There is an inter-dependent relationship between latency and data transfer rate which depends on the protocols which are used to carry data.

Some of the factors which affect latency are:

Suppose your internet provider has advertised to give you a speed of 80 Mbps (Megabits per second) and you have a file of say 80 MB then how much time will it take?

Let’s calculate, we know that there are 8 bits in 1 byte so speed should be divided by 8 as our file is in bytes not in bits.

This is how we calculate the downloading speed and time of files.

There are a number of tools available online to measure downloading and uploading speed some of them are broadband performance and speedtest. One can also test hardware by using software like HDTach and CrystalDiskMark.

Question 1: What is the data transfer rate if 50 Megabyte is transferred in 4 minutes?

We multiplied by 8 as there are 8 bits in one byte.

Question 2: How much data will be transferred in 1 hour at a rate of 100 bits per second?

Step 3: Convert it to bytes

You can also convert it kilobytes by dividing it by 1024.

Question 3: How much time will be taken to transfer 50 GB data at a rate of 4 MBps ?

Step 1: Convert 50 GB data to MB as data transfer rate is in MBps

Step 3: Converting it to hours

Question 4: What is the data transfer rate in KBps if 100 Megabyte is transferred in 2 minutes?

Question 5: How much time will be taken in minutes to transfer 25 GB data at a rate of 10 MBps ?

Step 1: Convert 25 GB data to MB as data transfer rate is in MBps

Step 3: Converting it to minutes