What is contextual selector in CSS ?

Descendants: It matches all elements which are contained within another element.

For any specific HTML element, we can apply the general CSS property that is required to style that element. The below code example will illustrate the approach for applying the contextual selector.

Example: In this, there is a parent div tag and its two-child p tags. The parent <p> tag and parent <div> tag turns the elements into red as the program executes. 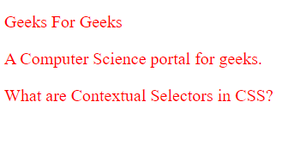 But suppose you have to turn only that paragraph into the green which is under div and not the other one outside div. You want both <p> and <div> tags to stay red for the document as a whole, but for elements inside the <div> tag, you need to turn the <p> tag into green. How can you do this?

Example 2: In this example, any <p> tag that is inside <div> tag, will make it green (and not red like the previous syntax specified). Here, the <p> tag will be made green only in the context of <div> tag.  It will be red in all other contexts.

From the above examples, we have seen that how a contextual selector is applied to style an element only if the element is in the specified context.

Hello Geeks! Don’t stop learning now. Get hold of all the important competitive programming concepts with the Web Design for Beginners | HTML  course.