What is Circuit-Level Gateway?

A firewall is a device that secures our network by monitoring traffic that can be incoming or outgoing by allowing or blocking it on the basis of security rules. It is also called the first defense device for network security.

The main purpose of a firewall is to filter the packets it receives or sends. When a packet is transferred between computers through a network, it transfers in small packets, the firewall keeps track of it. Usually, we use firewalls that are helpful in blocking unauthorized requests which are passing through designated traffic.

A circuit-level gateway firewall helps in providing the security between UDP and TCP using the connection. It also acts as a handshaking device between trusted clients or servers to untrusted hosts and vice versa.

The information that passes to a remote computer with the help of a circuit-level gateway appears as it is initiated from the gateway. This is everything because of information hiding in protected networks. Circuit Level gateways are not expensive.

For defining a valid session in Circuit Level Gateway the component used are:-

This circuit-level gateway setup can be done with the help of two TCP connections, establishing the connection between the gateway and inner host TCP and outer host of TCP users.

After the connection establishment of the inner and outer host, the Gateway transmits the TCP segments from one to another without bothering about the contents.

In the Circuit Level Gateway, once a session is permitted no further checks at the level of individual packets are executed. 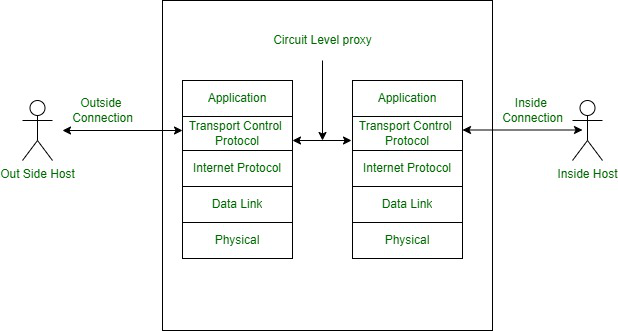