What is Blockchain as a Service (BaaS) in the Tech Industry?

Technology is growing at a tremendous rate. And all companies are in a race to adapt to these technological innovations or risk becoming obsolete in the long run. However, this means that companies don’t often have time to implement these new technologies in-house and build tech support from scratch. That’s where the cloud services come in! There are vendors that offer these technologies to other companies as a service so that they don’t have to worry about in-house development from scratch, and they can just focus on their core business. And now, Blockchain is the new technology on the block! That is why Blockchain as a Service (BaaS) is becoming increasingly popular, especially with smaller and mid-level companies. 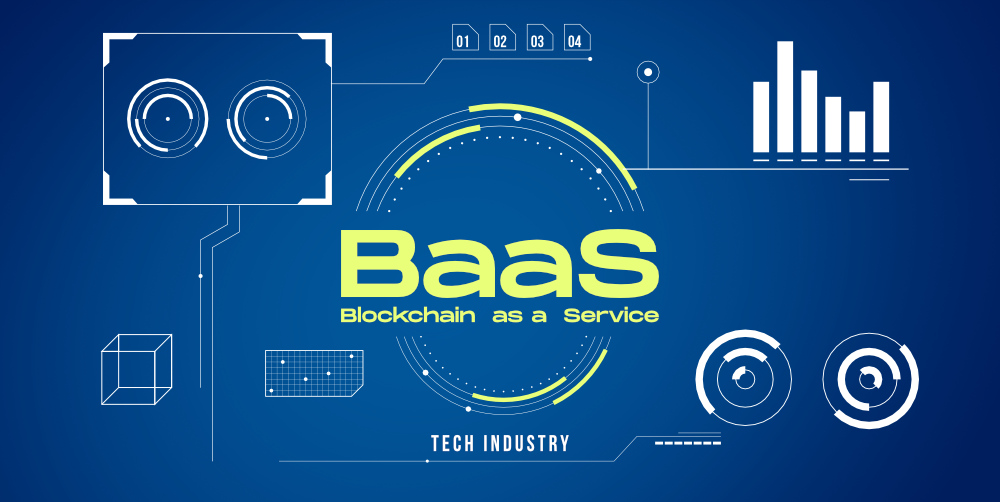 But what exactly is Blockchain? And what is “Blockchain as a Service”? While Blockchain is a very hyped up technology because of Bitcoin, very few people understand what it truly means. So let’s attempt to understand the basics of Blockchain and BaaS first before moving on to its advantages, disadvantages, and the vendors that offer this technology.

Blockchain is a chain of blocks where these “blocks” constitute digital information that is connected using cryptography. These blocks are formed of the data that is connected to a unique 32-bit whole number called a nonce. The nonce, in turn, has a 256-bit hash number attached to it. These three components together ensure security in the blockchain. The chain part in blockchain symbolizes that these blocks are string together to form a chain because each hash in a block references the previous block in the chain.

What is Blockchain as a Service (BaaS)?

Blockchain is becoming more and more popular not just in Cryptocurrency but in the financial transactions where security and transparency is a must. However, it is very expensive and technologically complicated to create, maintain, and operate a blockchain. That is why many smaller and mid-level companies are hesitant to invest fully in blockchain even though its advantages are obvious. However, Blockchain as a Service can easily resolve this problem.

This is based on the Software as a Service (SaaS) model where a company specifically invests in creating, maintaining, and operating a blockchain. This company can then offer the advantages of blockchain to other companies as a service while charging a fee. They can offer blockchain on any of the available distributed ledgers like Ethereum, Bitcoin, R3 Corda, Hyperledger Fabric, Quorum, etc. along with the peripheral services such as system security, bandwidth management, resource optimization, etc.

In this way, many smaller and mid-level companies who don’t want to build and maintain their own blockchain systems from scratch can still obtain the advantages of blockchain for a nominal fee. These companies can focus on their core business and obtain value addition from the blockchain without needing to become experts in the technology. So they get the profits of blockchain including increased security while decreasing their risk of investment using Blockchain as a Service (BaaS). It’s a win-win situation for all!

What are the advantages of Blockchain as a Service?

Blockchain is a complex technology that requires considerable financial investment and expert knowledge to implement from scratch. However, companies can implement Blockchain as a Service with minimal costs as they are accessing the blockchain from a third-party vendor. Most BaaS vendors also have specific subscription plans for companies which means they can spend according to their requirements. This is especially useful for those companies that don’t have blockchain as their core business but just want to leverage it for its advantages such as security and transparency.

Blockchain is a complex technology so companies don’t need to be experts in it to leverage the power of BaaS. There are ready-made platforms and templates that blockchain vendors provide. Other companies can just buy these services and developers can tweak them a little to their company requirements without becoming experts. This is not the case if companies decide to implement blockchain from scratch as that requires specialized knowledge and trained experts.

What are the disadvantages of Blockchain as a Service?

Blockchain as a Service by default implies that companies are reliant on their service vendors to provide them with the software they need according to their company requirements. While this is not a bad thing as companies are gaining a lot with a minimum investment in blockchain, it does mean that companies can suffer if there is a time lag, miscommunications, lack of understanding, or any other problems between them and their service providers.

2. Limited Knowledge of the Technology

Blockchain is still a relatively new technology and there are very few people that have knowledge of how it works. In this situation, if a company invests in Blockchain as a Service and none of its employees even have a basic knowledge of how to leverage this service, then the company may fail in the implementation of blockchain and lose all their investment money.

Which vendors offer Blockchain as a Service?

Amazon offers Blockchain services to companies using the open-source frameworks Ethereum and Hyperledger Fabric. This Baas is fully managed by Amazon so companies can set up and manage their blockchain easily. This blockchain can be scaled when the applications increase over time. There is also a choice about whether to go with Ethereum or Hyperledger Fabric dispensing on specific company needs. Amazon Managed Blockchain either offers a membership pricing or an On-Demand peer node pricing.

IBM Blockchain Service allows companies to explore and establish their blockchain services to find new business opportunities and better their prospects. Companies can either join existing client blockchain networks that are already in production or if they have specific needs, they can co-create a new network with the IBM Blockchain Service. The blockchain is build using the Hyperledger Fabric platform which is an open-source platform provided by the Linux Foundation.

Azure Blockchain Service allows companies to easily leverage the power of blockchain so that they can focus on developing their business. It is very easy to create and manage consortium blockchain architecture which also provides support for Azure SQL, Cosmos DB, and the Event Grid. The Azure Blockchain Service pricing plan includes two tiers namely Basic and Standard with per-node pricing.

Oracle provides a complete blockchain platform along with its peripherals with Baas. The blockchain is based on the Hyperledger Fabric platform with peer nodes, Oracle REST proxy, and operation tools provided. The Oracle Blockchain Platform pricing plan includes two tiers namely Standard and Enterprise with per-node pricing along with the blockchain storage.

All in all, Blockchain as a Service is an excellent option to harness the advantages of blockchain and obtain value addition from this technology without becoming an expert. BaaS provides various advantages such as advanced infrastructure at a low cost and easy usage that is customizable according to the company’s needs. So you can check out any of the above BaaS vendors to become a pioneer in this technology and take a big leap in the world of technology.

My Personal Notes arrow_drop_up
Next
What is Data as a Service (DaaS) in the Tech Industry?
Recommended Articles
Page :
What is Artificial Intelligence as a Service (AIaaS) in the Tech Industry?
24, Apr 20
What is Data as a Service (DaaS) in the Tech Industry?
05, May 20
Blockchain as a Service Platform - Easy to use
30, Sep 19
Identity as a Service (IDaaS) as a cloud Based service
05, Oct 18
What is the Role of Java in the IT Industry?
24, Jun 19
How Artificial Intelligence (AI) is Revolutionizing the eCommerce Industry in 2020?
03, Feb 20
How Technology is Reshaping Construction Industry?
13, Sep 21
Top 5 Industry Tools for Ethical Hacking to Learn in 2020
08, Sep 20
How is Data Science Changing the Healthcare Industry?
09, Jan 21
How is Robotics Changing the Healthcare Industry?
10, Oct 20
Top Trends in the Data Center Industry
01, Nov 20
How Digital Transformation is Reinventing Healthcare Industry?
23, Mar 21
Impacts of Covid-19 on Information Technology (IT) Industry
04, Jun 21
7 Applications of Machine Learning in Healthcare Industry
03, Oct 21
[TopTalent.in] How Tech companies Like Their Résumés
06, Nov 12
Top 10 Highest Paying Tech Jobs
18, Apr 19
IIIT Hyderabad M. Tech Interview Experience
09, Jan 20
How are Tech Companies Helping Fight COVID-19?
14, Apr 20
10 Tech Devices that help People with Disabilities
29, Jul 20
Top 5 Tech Giants in the World
12, May 20
Career Opportunities for B.Tech Graduates in Defense Forces
13, May 20
Best Tech Movies That Every Programmer Must Watch
31, Jul 20
Want to Become an Android Developer - Learn these 5 Tech Skills!
10, Feb 21
8 Most Popular Tech Fields in 2021
13, Jan 21
Article Contributed By :