Assume a person has a car that is traveling in a straight path at a constant speed of 10 km/h while a helicopter is noticed flying at around 26 km/h. If someone asked you, where do you locate the acceleration in these two cases? Your response will undoubtedly be no because both are going at the same speed, implying that no acceleration exists in both cases.

What is the Motion in a Straight Line?

Motion in a straight line refers to the displacement of an object with respect to time while the object moves along a straight path. It is a uni-dimensional motion and can be well expressed using the X-axis coordinate system alone. This is also termed Linear Motion.

e.g. A car moving along the linear path in a uniform direction.

Following are the types of motion in a straight line:

1. Uniform Motion – The uni-dimensional motion of an object where it travels with uniform speed all along the path is called Uniform motion. Since the body covers equal distances in equal intervals of time, the velocity of the body remains constant. The speed of an object remains the same during all time frames, the average speed of the object is equivalent to its actual speed. No acceleration is attained by the object in the case of uniform motion. For instance, a car traveling 20 km in the first hour, 20 km in the next hour, and so on continuing with this throughout its motion. 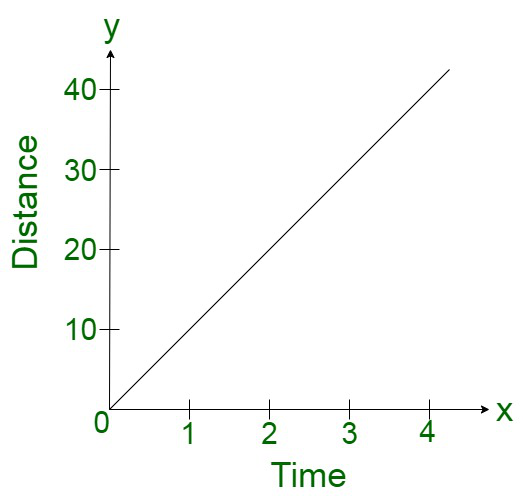 2. Non-uniform motion in a straight line (Accelerated motion) – The uni-dimensional motion of an object where it travels with a varying speed all along the path is called Non-Uniform motion. Since the body covers unequal distances in equal intervals of time, the velocity of the body remains modified. The speed of an object changes during the time frames, the average speed may be different from its actual speed. Acceleration or deceleration is attained by the object in the case of non-uniform motion. For instance, a car traveling 20 km in the first hour, 30 km in the next hour, and so on continuing with a varying speed throughout its motion. 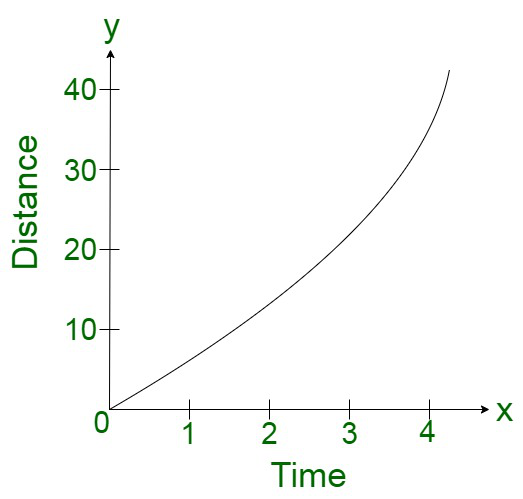 Acceleration is termed as the rate of change of velocity which is computed as a function of time. Or in other words, the acceleration can be visualized as the second derivative of position concerning time.

It is a vector quantity, which is associated with both magnitude and direction. It is denoted by ‘a’.

The dimensional formula of acceleration is [M0 L1 T-2].

Mathematically, the change in the velocity of an object in motion is defined as, (v – u) where v and u are the final and the initial velocities.

Therefore, the acceleration of the object is given by,

where t is the time taken by the object.

Following are the different types of acceleration associated with an object as, 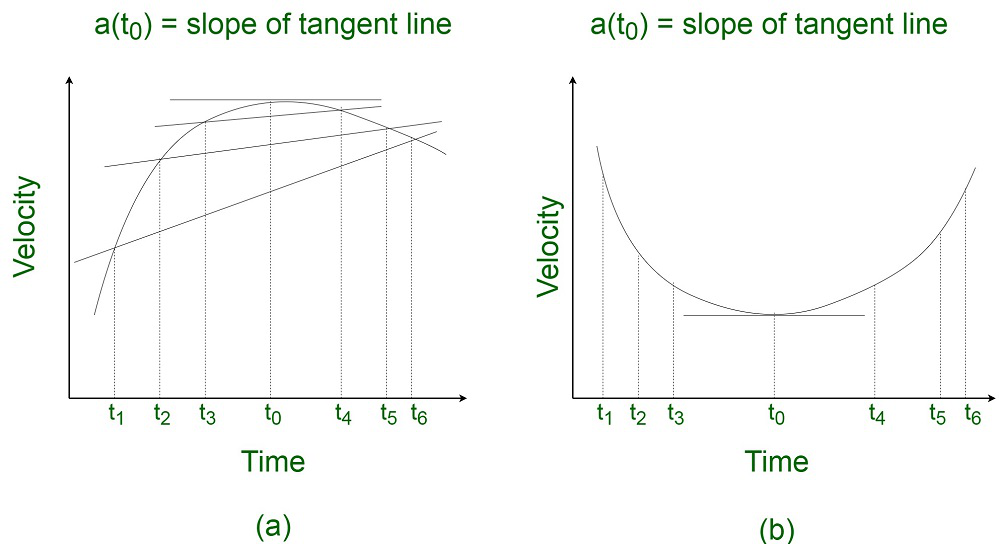 In the velocity-time graph, instantaneous acceleration is equivalent to the slope of the tangent line.

(a) The average acceleration:

Thus, for a given velocity-time function, the zero of the acceleration function is attained either at a minimum or the maximum velocity.

The curves indicate the velocity-time graph time is plotted along x-axis and velocity is plotted along y-axis. While finding displacement through v – t graph, keeping sign under consideration. 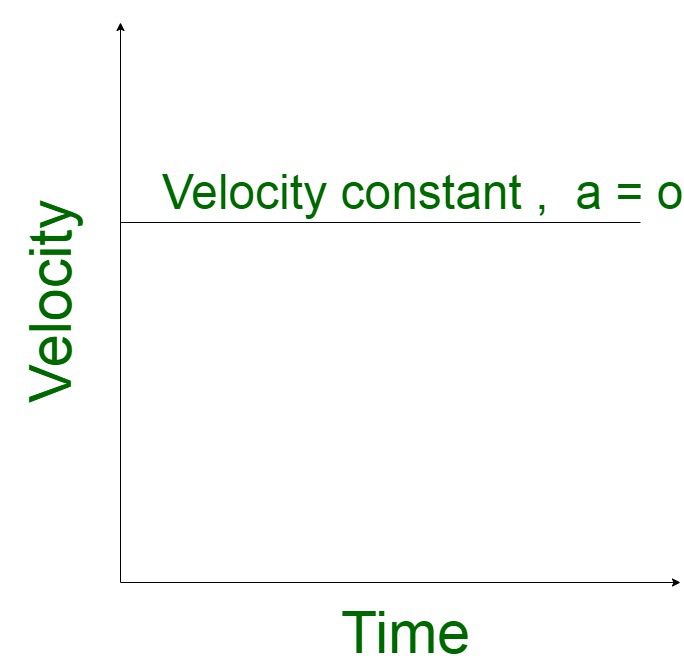 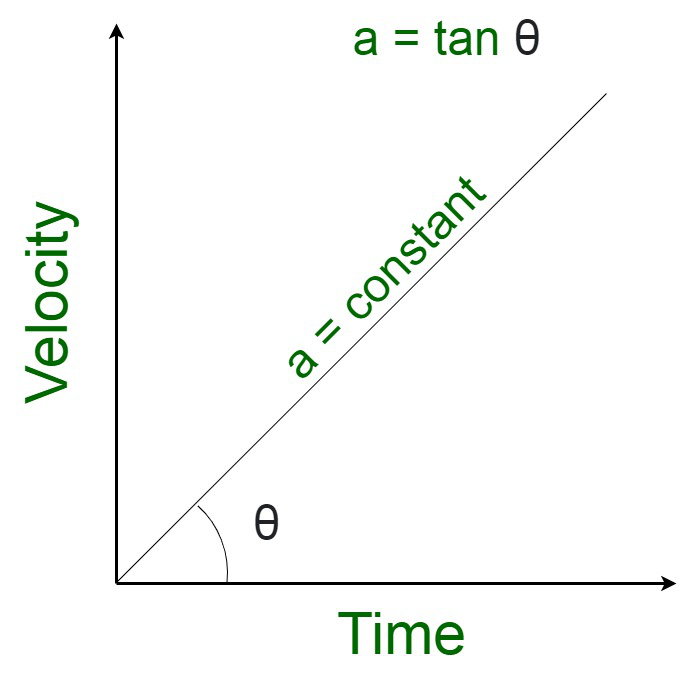 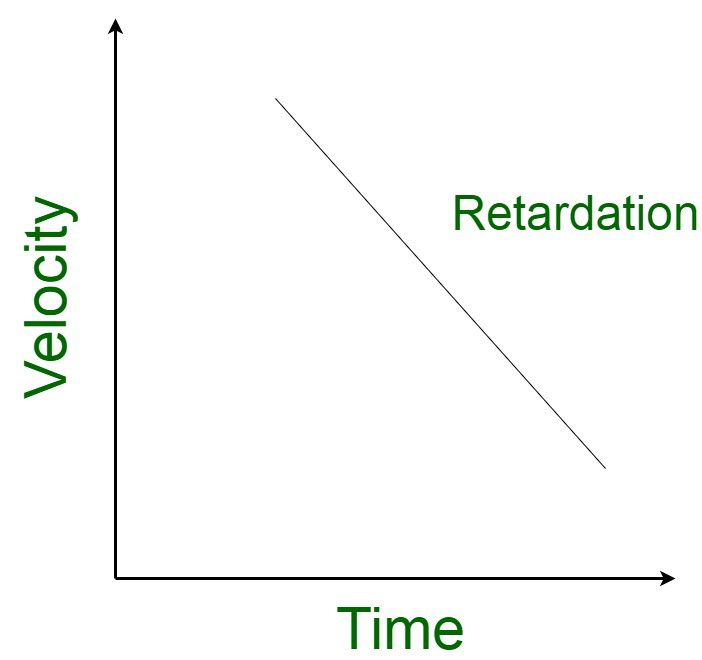 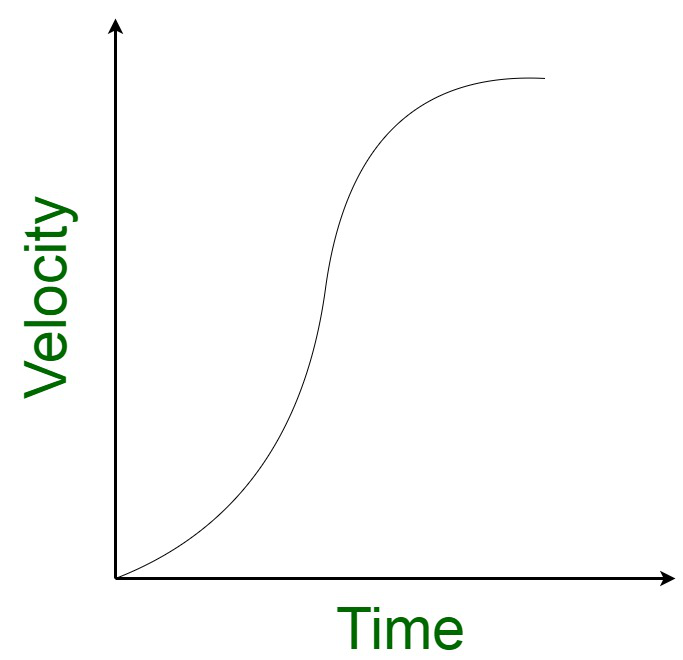 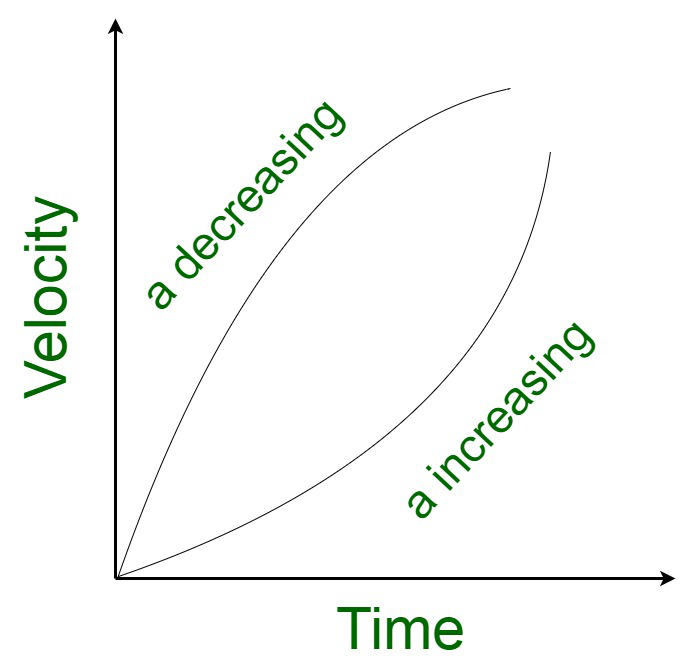 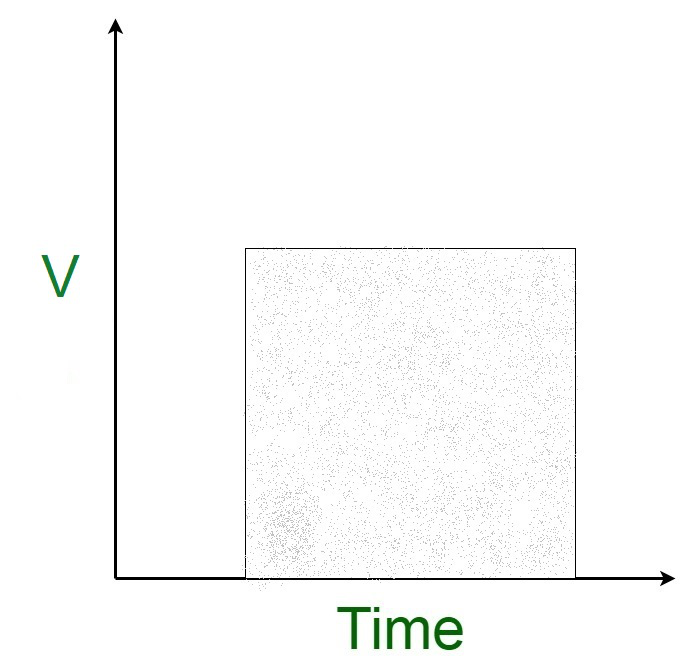 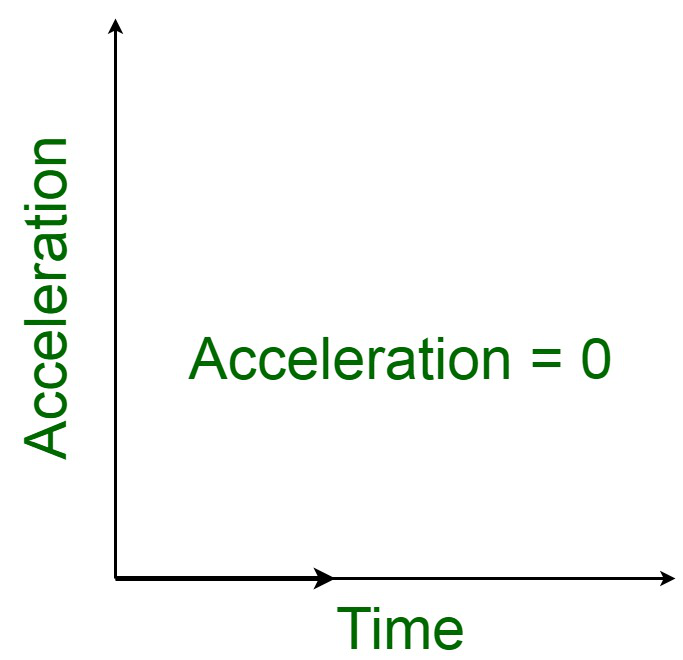 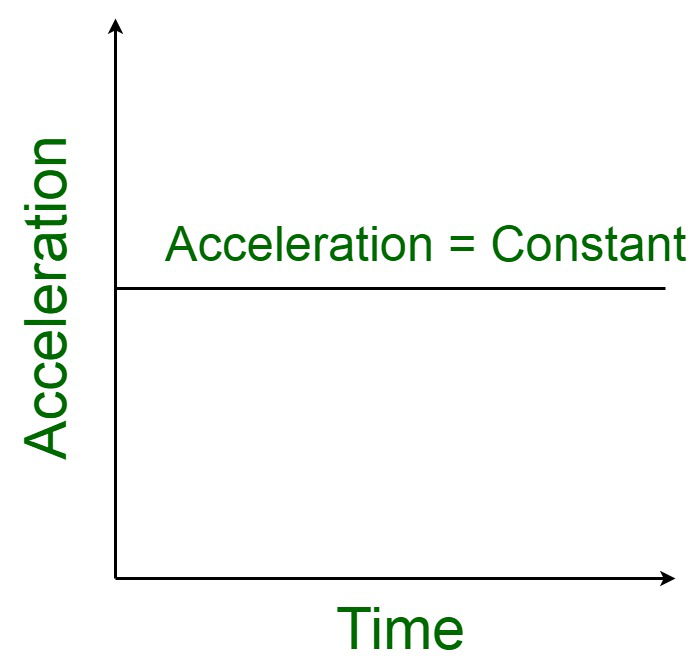 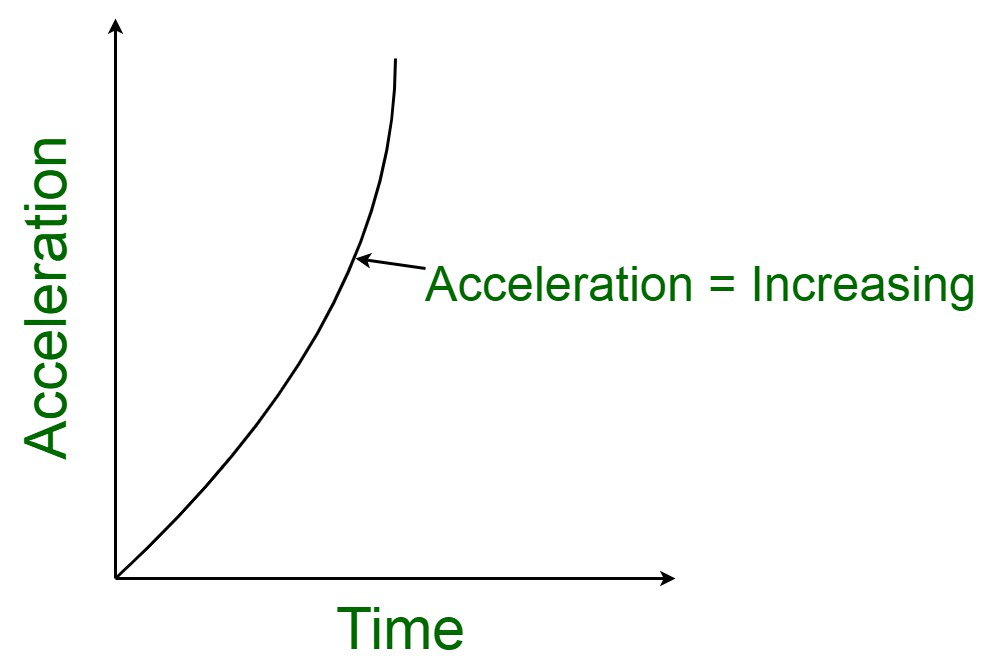 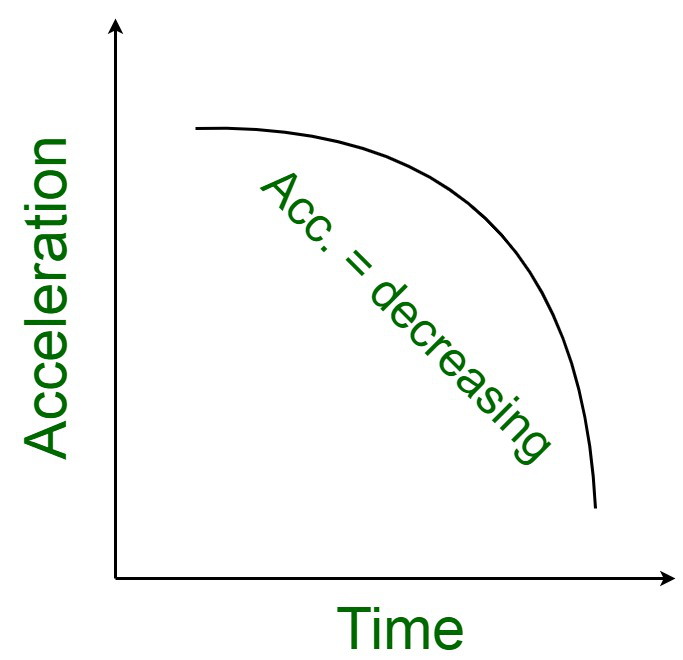 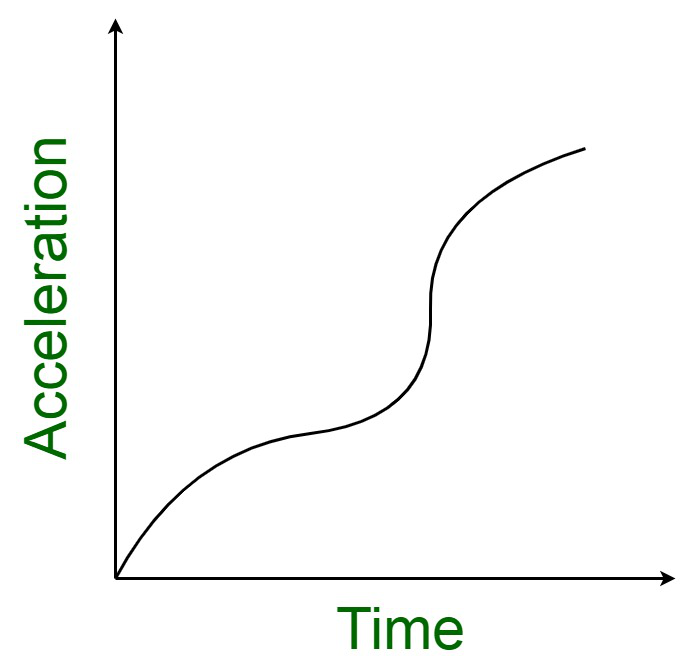 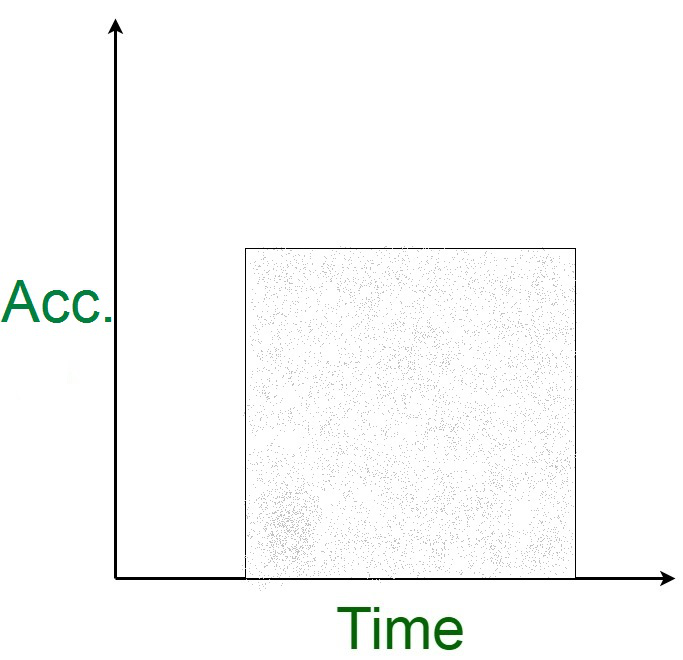 In case the velocity of an object changes in equal amounts during the same time interval, then the body is said to be in uniform acceleration.  In this case, neither the direction nor magnitude changes with respect to time.

For an object covering uniformly accelerated motion, the following equations derived can be used to relate displacement (x), time taken (f), initial velocity (u), final velocity (v) and acceleration (a).

The equation governs the final and initial velocities v and u of an object moving with uniform acceleration a: v = u + at, which can be visualised graphically as, 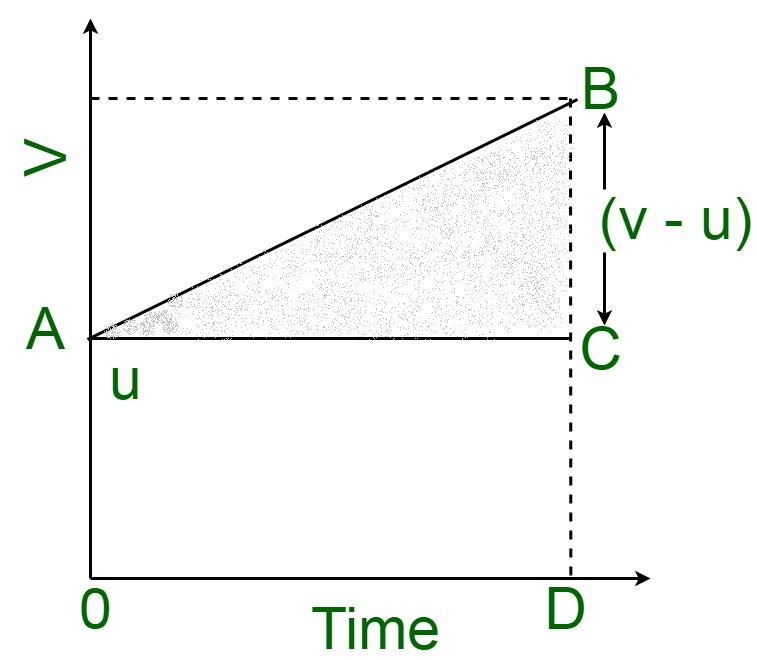 The area under this curve is:

Area between the time instants, 0 and t are given by,

The area under v – t curve represents the displacement.

Therefore, the displacement x of the object is:

The equation for displacement can also be given as follows:

Earlier we have derived:

Substituting the value of t in the equation for displacement we get,

So, we have derived following kinematic equation

u is initial velocity

a is acceleration and

s is the distance covered in time interval t.

We have to find Acceleration ‘a’

Distance of the terrace from the ground is 29.4 m.

Problem 4: If a car moves from rest and then accelerates uniformly at the rate of 7.5 m/s2 for 10 s. Find the velocity of the train in 10 s.

Initial velocity u = 0 {as the car was at rest}

Problem 5: If an object moves along the x-axis according to the relation x = 1 – 2t + 3t2, where x is in meters and t is in seconds. Calculate the acceleration of the body when t = 3s.