What is a Star? Formation, Life Span, Constellations

The night sky is filled with brilliant stars. Stars, like the sun, emit their own light. The Sun is millions of times further distant than the stars. As a result, they seem to us as points with a considerably larger Sun. During the day, stars can be seen in the sky, but they are obscured by the intense sunshine. The stars appear to be moving east to west. Because the pole star is oriented in the direction of the earth’s axis, it does not appear to move. Sirius is the brightest star in the sky, and it is near to the constellation Orion.

Stars are celestial bodies made up of heated gases (mainly helium and hydrogen). Each star produces its own light. A star is something like our sun. The stars are not all the same. They can differ in terms of brightness, size, color, and temperature. They are immense in size, yet from the Earth’s surface, they look like point-sized objects. This is due to their great distance from the Earth.

Despite the fact that stars are constantly there in the sky, they are only visible at night owing to the lack of sunshine. They look like points because they are millions of kilometers away. As their light is refracted in our atmosphere, stars sparkle. With the exception of the Polestar, the position of the stars changes as seen from the earth’s surface.

Stars have a finite lifespan. They are born after millions of years and live for tens of millions of years before dying. The changes in the stars are gradual due to their extended lifetime. As a result, they appear to us to be permanent.

What is a Pole Star? 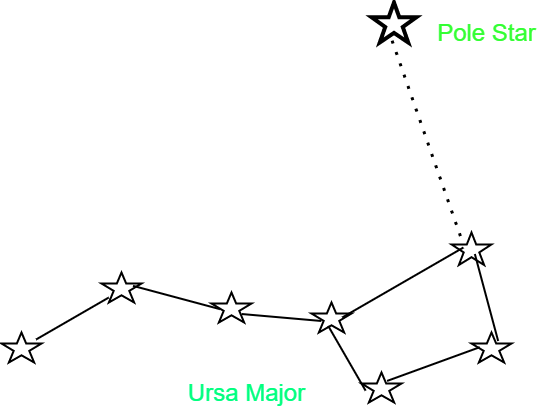 Life Span of a Star

A star’s life cycle lasts billions of years. In general, the larger the star, the shorter its lifespan.

Formation of a Star

What is a Light Year?

The distance between the superstars is enormous due to the star’s remoteness from the rest of the earth. This distance in kilometres is difficult to calculate. As a result, these vast distances are measured in Light-years.

Sun is a Star

There are millions and millions of stars outside our system, yet the closest star to us is our own Sun. It may not appear to be a star, although this is frequently due to its proximity to us. The light from the Sun only takes approximately 8 minutes to reach us, while the light from the next nearest star takes 4 years.

Sun is a yellow dwarf star. It is present at the center of the Milky Way galaxy. The Sun is also a star because it is the celestial body that is composed of hydrogen and helium gas. The continuous burning of these gases produces light and heat energy emitted by The sun. Just as other stars sun also has its own lifespan.

The Sun may be a pretty ordinary star approximately halfway through its 10-billion-year lifespan. When the Sun reaches the end of its life, it will explode into a red giant star, engulfing the whole planet. It’s always a little depressing to realise that the planet won’t last forever. Because they are a source of sunlight, stars vary from all other elements of the system discussed thus far. This light is produced as a byproduct of nuclear reactions.

As the light emitted by stars enters the earth’s atmosphere it starts getting refracted and the direction of lights starts changing. It happens due to the variable temperature and density of different atmospheric layers. The star stars would have appeared still if the earth did not have an atmosphere as light travels in a straight line. These strata differ in density and temperature. Light rays are bent or refracted in a random direction as a result of this. Stars appear to sparkle as a consequence.

Constellation is the cluster of stars that appears to form identifiable forms and patterns. Some celebrities are grouped in groups or patterns.

A constellation is defined as a group of stars that appear to form a recognised shape or pattern.

At the moment, around 88 constellations are known. Each constellation has a name that represents an animal, a person, or another item that it looks to resemble. All of the constellations appear to move from east to west in the sky. Ursa Major, Leo Major, Cassiopeia, and Orion are some of the most important constellations.

Problem 1: How is the tail of a comet formed?

A comet is made up of ice, dust, and boulders. When the comet gets close to the sun, part of its ice melts and turns into gas. A lengthy luminous tail is created by gas and loose particles liberated from ice.

Problem 2: The tail of a comet disappears when it moves away from the sun. Give reason.

Problem 3: Do all stars move from one place to another in the sky? Explain what factors make life possible on Earth?

The stars all migrate from east to west in the sky. The Earth revolves around its axis and the pole star, which is located in the direction of the axis. It doesn’t appear to be moving.

The world is the only planet in the system where life is known to exist. Some unique environmental circumstances are responsible for the existence and persistence of life on Earth. These include precisely the right distance from the Sun, so that the temperature range is correct, the presence of water, a sufficient atmosphere, and an ozone layer.

Problem 4: Why do stars appear in different colors?

Stars have different colors according to their lifespan. The youngest stars appear blue in color whereas the older ones appear from orange to red.

Problem 5: Explain how with the help of Ursa Major you can locate the pole star? How is the surface of the moon?

Take a look at the stars towards the end of Ursa Major. Consider a straight line that passes through these stars. Extend this fictitious line towards the north. This path will go to a not-too-bright star. This is the brightest star in the sky. Poets and storytellers may find the moon to be a fascinating thing. However, when astronauts landed on the moon, they discovered that the surface is dusty and desolate. There are many craters of varying sizes. It also has a significant number of steep and high mountains. Several of these places are elevated due to the world’s tallest mountains.