What is a Neuron? – Definition, Structure, Classification, Functions

What is a Neuron?

A neuron can be defined as a nerve cell that transmits information from one part of the body to another through neural impulses. Neurons receive and transmit signals to different parts of the body. This transmission process can be carried out both in physical and electrical forms.  Below mentioned are the types of neurons that are classified based on their activities,

Sensory neurons are a major form of neurons that are present throughout the body and carry information from the sensory receptor cells to the brain. These neurons are Pseudo unipolar. For example, when you are walking suddenly if you step on a thorn, immediately the sensory cells that are present there senses the reaction and immediately send a signal to the brain/ nervous system about the information they have received. The data that is received by the sensory neurons can be chemical or physical, relative to our five senses. Thus physical input data received can be any of the things like sound, heat, fire, light, touch, etc. the chemical input data can be smell or taste. These chemical and physical inputs can be sent to the brain.

There are two types of motor neurons:

These are multipolar. These neurons transmit data between various neurons (neurons – neurons)in the body. They connect the spinal motor and sensory neurons. Besides transferring signals between sensory and motor neurons,  interneurons also communicate with each other, forming circuits of various complexity.

Since neurons are the structural and functional unit of the body, they contain the following parts. 1. Cell Body   2. Cell Processes 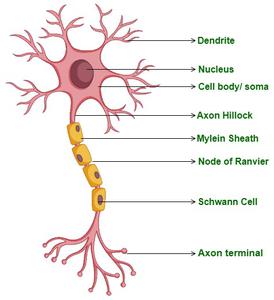 This is defined as any projection from the cell body of the neuron. The projection can be an axon or a dendrite. These are the extensions of the cell body. These contain the following components.

Dendrites are tree-like structures (dendritic trees) that are designed to receive communications from other cells. They are 2micro meters in length. They receive signals from various neurons and process and transfer the signals to the cell body. It contains numerous ribosomes, smooth endoplasmic reticulum, and Golgi apparatus which are useful for high protein synthesizing activity during signal transmission. The surface of dendrites is with more number of receptors that become activated when it gets submitted to the neurotransmitters. These dendrites receive synaptic inputs from axons. These are many short branching extensions towards Nissl granules, and conduct impulses towards the cell body. They bear Spines(The small protrusions found on dendrites.) which are specialized for contact with other neurons.

This is the transmitting part of the neuron. These are the long thin structures (Axon length >1mm to <1m)  in which axon potentials are generated.  After initiation, action potentials travel down through the axons to cause the release of neurotransmitters. It is a single long process arising from the axon Hillock. It is cylindrical and does not contain Nissl granules, gives side branches (collateral), and conducts impulses away from the cell body. The axons show terminal branches with enlarged ends called buttons. The axons in the peripheral nervous system are ensheathed by cells of Schwann(Neurilemma) which are arranged along the length of the axon. The large Axons have a Myelin sheath produced by encircling cells of Schwann around them. Myelin consists of lipoproteins in the plasma membrane of Schwann cells.  The Nodes of Ranvier is a gap between two cells of Schwann where myelin is absent and the axon is exposed. The axons in the central nervous system are myelinated by Oligodendrocytes.

The neurons show variations in their structure and functions and can be classified as,

According to the number of processes of Neurons, Neurones are divided as

Question 1: Why are neurons called building blocks of the brain?

Neurons are called building blocks of the brain because each neuron consists of the cell body, dendrites, and axons which are connected to each other as blocks.

Question 2: What are the main functions of the neuron?

The main function of the Neuron is to send and receive signals from the other sensory organs of the body.

Question 3: What is the shape of the Neuron?

Neurons are star-shaped, spindle-shaped, and pyramid-shaped.

Question 4: What are the functions of Myelin sheath?

Protects axon, Insulates axon from electrically charged ions, and helps in the repair of injured fibers.