What is a bridge in React Native ?

A React Native app comprises two sides as given below.

The Native Side should be Java or Kotlin for Android and Swift or Objective-C for iOS.

Working of bridge: When we hit our app icon to open our app then the OS designs the main thread (a UI thread a.k.a) and allots this thread to our app. This main thread creates the JavaScript thread and the shadow thread (also known as the shadow tree). The shadow thread’s task is to compute layouts described on the JavaScript side and redirect that detail to the Native side. Views are set down in JavaScript, computed in the Shadow tree, and redirected to the UI thread.

Dispatching data: Now we know that how layouts are described at the begin however what takes place after the app starts running? what happens when we need to impair a button? Does this detail is sent through the bridge?

To impair a button we may set a feature on the JavaScript side that will be redirected above the bridge like a serialized JSON object. Improvements on native views are grouped simultaneously and redirected over the native side at the ending of all iteration of the event loop.

Execution: Most of the time all things pass steadily however sometimes like an original bridge it obtains traffic jams. When there is a big catalog of items and we begin scrolling rapidly then we might recognize a blank screen prior to the rest of the items are conveyed. This happens because the onScroll native event is redirected to the JavaScript thread, the JavaScript thread transmits the new layout detail to the shadow tree, the shadow tree computes the layout and redirects to the native side. While scrolling rapidly we gather these events that give rise to a traffic jam over the bridge. We can try to escape this by pre-computing layouts, in order to cross the bridge a few times. While executing complex animations we can obtain similar execution problems.

Let us now explore in-depth and recognize how React Native functions under the hood and this will help us to understand the compilation of JavaScript to a Native code and the working of the whole procedure. It is significant to recognize how the whole procedure works, so that sometimes if you have performance issues then you will recognize where this issue originates.

Flow of Information: As we have discussed React ideas that power up React Native, and be one of them is that UI is a function of data. You can convert the condition and React notices that what to be updated. Now let us suppose that how details flow along with the usual React app. Explore the diagram given below : 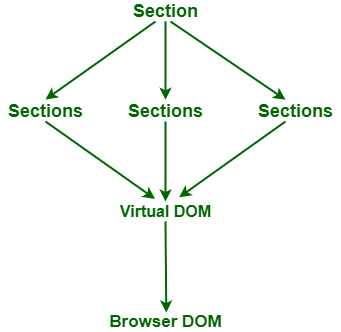 Explanation of above diagram:

React Native uses the second method, which is Serializable messages interchanged between JavaScript and Native modules. Rather than mutating data on shareable objects, it proceeds asynchronously serialized grouped messages to the Bridge of React Native. The Bridge in React Native is the layer that permits the JavaScript code and the Native code to interact with each other.

Architecture: Following is the diagram that explains the structure of React Native architecture : 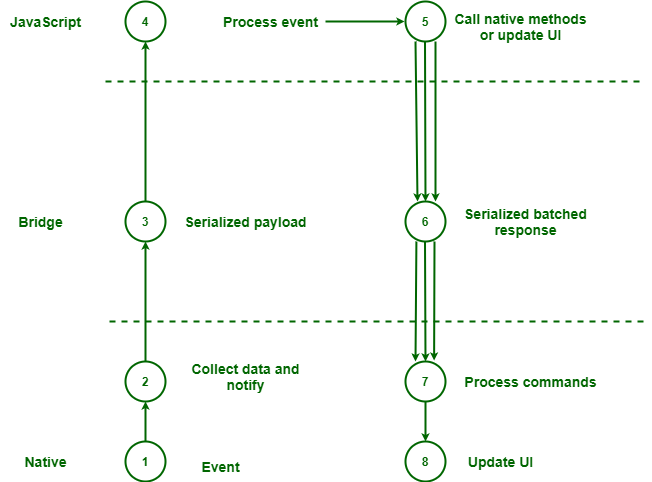 Three layers are stated in the diagram above:

The Bridge in React Native is the layer that permits the JavaScript and the Native modules to interact with each other and is primarily a carrier layer that conducts nonparallel chronological grouped feedback messages from JavaScript to Native modules. In the picture given above the Native layer is shown last since this layer is nearest to the device itself.

When an incident is implemented on the Native layer then it might be a timer, touch, or network request, primarily, any incident associating device Native modules. Its data is assembled and this data is sent to the React Native Bridge as a serialized message. After that, the Bridge proceeds this message towards the JavaScript layer.

The JavaScript layer is an incident loop. After the React Native Bridge proceeds the Serialized payload to JavaScript then the incident is processed and the application logic becomes active.

Let’s understand about each of the above threads: