What are Web Services?

The Internet is the worldwide connectivity of hundreds of thousands of computers of various types that belong to multiple networks. On the World Wide Web, a web service is a standardized method for propagating messages between client and server applications. A web service is a software module that is intended to carry out a specific set of functions. Web services in cloud computing can be found and invoked over the network.
The web service would be able to deliver functionality to the client that invoked the web service.

A web service is a set of open protocols and standards that allow data to be exchanged between different applications or systems. Web services can be used by software programs written in a variety of programming languages and running on a variety of platforms to exchange data via computer networks such as the Internet in a similar way to inter-process communication on a single computer.

Any software, application, or cloud technology that uses standardized web protocols (HTTP or HTTPS) to connect, interoperate, and exchange data messages – commonly XML (Extensible Markup Language) – across the internet is considered a web service.
Web services have the advantage of allowing programs developed in different languages to connect with one another by exchanging data over a web service between clients and servers. A client invokes a web service by submitting an XML request, which the service responds with an XML response.

SOAP stands for “Simple Object Access Protocol.” It is a transport-independent messaging protocol. SOAP is built on sending XML data in the form of SOAP Messages. A document known as an XML document is attached to each message. Only the structure of the XML document, not the content, follows a pattern. The best thing about Web services and SOAP is that everything is sent through HTTP, the standard web protocol.

A root element known as the element is required in every SOAP document. In an XML document, the root element is the first element. The “envelope” is separated into two halves. The header comes first, followed by the body. The routing data, or information that directs the XML document to which client it should be sent to, is contained in the header. The real message will be in the body.

UDDI is a standard for specifying, publishing and discovering a service provider’s online services. It provides a specification that aids in the hosting of data via web services. UDDI provides a repository where WSDL files can be hosted so that a client application can discover a WSDL file to learn about the various actions that a web service offers. As a result, the client application will have full access to the UDDI, which serves as a database for all WSDL files.
The UDDI registry will hold the required information for the online service, just like a telephone directory has the name, address, and phone number of a certain individual. So that a client application may figure out where it is.

How Does Web Service Work?

The diagram depicts a very simplified version of how a web service would function. The client would use requests to send a sequence of web service calls to a server that would host the actual web service. 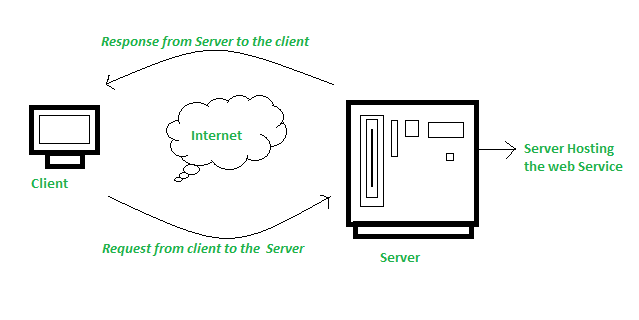 Remote procedure calls are what are used to make these requests. Calls to methods hosted by the relevant web service are known as Remote Procedure Calls (RPC). Example: Flipkart offers a web service that displays prices for items offered on Flipkart.com. The front end or presentation layer can be written in .Net or Java, but the web service can be communicated using either programming language.
The data that is exchanged between the client and the server, which is XML, is the most important part of a web service design. XML (Extensible markup language) is a simple intermediate language that is understood by various programming languages. It is a counterpart to HTML. As a result, when programs communicate with one another, they do so using XML. This creates a common platform for applications written in different programming languages to communicate with one another.
For transmitting XML data between applications, web services employ SOAP (Simple Object Access Protocol). The data is sent using standard HTTP. A SOAP message is data that is sent from the web service to the application. An XML document is all that is contained in a SOAP message. The client application that calls the web service can be created in any programming language because the content is written in XML.

Web services have the following features:

(a) XML Based: The information representation and record transportation layers of a web service employ XML. There is no need for networking, operating system, or platform binding when using XML. At the middle level, web offering-based applications are highly interoperable.

(b) Loosely Coupled: A customer of an internet service provider isn’t necessarily directly linked to that service provider. The user interface for a web service provider can change over time without impacting the user’s ability to interact with the service provider. A strongly coupled system means that the patron’s and server’s decisions are inextricably linked, indicating that if one interface changes, the other should be updated as well.
A loosely connected architecture makes software systems more manageable and allows for easier integration between different structures.

(d) Coarse-Grained: Object-oriented systems, such as Java, make their services available through individual methods. At the corporate level, a character technique is far too fine an operation to be useful. Building a Java application from the ground, necessitates the development of several fine-grained strategies, which are then combined into a rough-grained provider that is consumed by either a buyer or a service.
Corporations should be coarse-grained, as should the interfaces they expose. Web services generation is an easy approach to define coarse-grained services that have access to enough commercial enterprise logic.

(e) Supports Remote Procedural Call: Consumers can use an XML-based protocol to call procedures, functions, and methods on remote objects utilizing web services. A web service must support the input and output framework exposed by remote systems.
Enterprise-wide component development Over the last few years, JavaBeans (EJBs) and.NET Components have become more prevalent in architectural and enterprise deployments. A number of RPC techniques are used to allocate and access both technologies.
A web function can support RPC by offering its own services, similar to those of a traditional role, or by translating incoming invocations into an EJB or.NET component invocation.

(f) Supports Document Exchanges: One of XML’s most appealing features is its simple approach to communicating with data and complex entities. These records can be as simple as talking to a current address or as complex as talking to an entire book or a Request for Quotation. Web administrations facilitate the simple exchange of archives, which aids incorporate reconciliation.
The web benefit design can be seen in two ways: (i) The first step is to examine each web benefit on-screen character in detail. (ii) The second is to take a look at the rapidly growing web benefit convention stack.

(c) Communication with Low Cost: Because web services employ the SOAP over HTTP protocol, you can use your existing low-cost internet connection to implement them. Web services can be developed using additional dependable transport protocols, such as FTP, in addition to SOAP over HTTP.

Question 1. What exactly do you mean when you say you’re going to upload a file on the internet? The name of the protocol that was utilized for it.

Uploading a file to a server is the process of transferring a file from your computer to a server through the Internet. FTP(File Transfer Protocol) is the protocol that is used for this. An FTP client application allows a user to communicate with an FTP server program in order to gain access to data and services on the server machine. Users must be able to connect to the Internet or communicate with an FTP client application in order to use the FTP server program.

Question 2. Why do we need a web service?

Web-based apps are developed using a range of programming platforms in today’s corporate world. Some applications are written in Java, others in .Net, and still others in Angular JS, Node.js, and other frameworks. Most of the time, these diverse programs require some form of communication to work together. Because they are written in separate programming languages, ensuring accurate communication between them becomes extremely difficult. Web services have a role in this. Web services provide a common platform for several applications written in different programming languages to connect with one another

Question 3. For web services, what kind of security is required?

Next
Python program to check if a string is palindrome or not
Related Articles
1. Web Services - Definition, Working, Types, Applications
2. Applications of Web Services
3. Market for Goods and Services
4. Internet and its Services
5. How to Open a Website using the Web Address?
6. What is a Web Address?
7. How to Design a Web Page in HTML?
8. Preparing Files for Web Output in Photoshop
9. Web Browser
10. Count of numbers between L and R that are coprime with P
Article Contributed By :