What are the steps to create first React Native App ?

Installation: Here we will use the Expo CLI version that will much smoother to run your React Native applications. Follow the below steps one by one to set up your React native environment.

Expo: It is a framework and a platform for universal React applications. It is a set of tools and services built around React Native and native platforms that help you develop, build, deploy, and quickly iterate on iOS, Android, and web apps from the same JavaScript/TypeScript codebase.

Step 1: Open your terminal and run the below command.

Step 2: Now expo-cli is globally installed so you can create the project folder by running the below command.

Step 3: Now go into the created folder and start the server by using the following command. 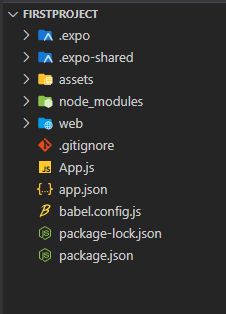 Example: In this example we simply render a text put some style on the text like text color.