What are the differences between props and state ?

We will learn about props and state with the help of an example project in ReactJS. 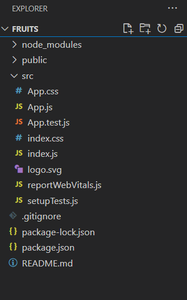 Props: Props are known as properties it can be used to pass data from one component to another. Props cannot be modified, read-only, and Immutable.

Example: Modify the default code with the below code.

Create a Component known as Fruit.js and add the below code

The following will be the output when we execute the above command. The data will be passed from the Parent component i.e. App.js to the Child component i.e. Fruit.js with the usage of the “Props” feature. 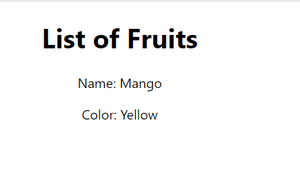 State: The state represents parts of an Application that can change. Each component can have its State. The state is Mutable and It is local to the component only.

Add the following code in the Car.js component.

The following will be the output when we execute the above command. The data is local to the component “Car” only and it can be updated using the button change in the screen.

Difference between props and state:

My Personal Notes arrow_drop_up
Previous
How to Create Horizontal bar chart using React Bootstrap ?
Next
How to create circular progress bar using SVG ?
Recommended Articles
Page :
ReactJS | State vs props
26, Apr 19
How to send state/props to another component in React with onClick?
25, Oct 20
Flutter - local state vs App-wide state
15, Feb 21
What's the difference between super() and super(props) in React ?
22, Jan 21
Communication between components using $emit and props in Vue.js
29, Jan 21
ReactJS | Props - Set 1
18, Mar 18
ReactJS | Props - Set 2
22, Mar 18
ReactJS | Methods as Props
22, Jun 20
How to access props inside quotes in React JSX?
28, Dec 20
React.js Render Props
15, Mar 21
How to pass multiple props in a single event handler in ReactJS?
29, Mar 21
How to create new elements with ReactJS mapping props ?
30, Apr 21
Destructuring of Props in ReactJS
23, May 21
ReactJS testInstance.props Property
03, Jun 21
How to apply validation on Props in ReactJS ?
24, Jun 21
What is the use of super(props) ?
18, Jul 21
What are props in React Native ?
12, Jul 21
Similarities and Differences between Ruby and C language
15, Jan 19
Similarities and Differences between Ruby and C++
15, Jan 19
What are the differences and Similarities Between Lumen and Laravel?
23, Oct 19
Difference between Distance vector routing and Link State routing
30, Apr 18
Difference between Hard Disk Drive (HDD) and Solid State Drive (SSD)
08, Feb 19
Difference Between State and Strategy Design Pattern in Java
19, Feb 21
Flutter - Difference Between setState and Provider in State Management
17, Apr 21
Article Contributed By :