What are Java Records and How to Use them Alongside Constructors and Methods?

As developers and software engineers, our aim is to always design ways to obtain maximum efficiency and if we need to write less code for it, then that’s a blessing.

In Java, a record is a special type of class declaration aimed at reducing the boilerplate code. Java records were introduced with the intention to be used as a fast way to create data carrier classes, i.e. the classes whose objective is to simply contain data and carry it between modules, also known as POJOs (Plain Old Java Objects) and DTOs (Data Transfer Objects). Record was introduced in Java SE 14 as a preview feature, which is a feature whose design, implementation, and specification are complete but it is not a permanent addition to the language, which means that the feature may or may not exist in the future versions of the language. Java SE 15 extends the preview feature with additional capabilities such as local record classes.

Let us first do discuss why we need records prior to implementing them. Let us consider an illustration for this.

Consider a simple class Employee, whose objective is to contain an employee’s data such as its ID and name and act as a data carrier to be transferred across modules. To create such a simple class, you’d need to define its constructor, getter, and setter methods, and if you want to use the object with data structures like HashMap or print the contents of its objects as a string, we would need to override methods such as equals(), hashCode(), and toString().

Note: It is over 100 of lines of code just to create a class that carries some data.

Now let’s look at what it would take to create a similar class using Record to get its usage prior to discussing properties of a records which are given below:

Some more Properties of Records

As tempting as it might be to use records for data carrier objects, records are still a preview feature in Java. Furthermore, as they are intended to be used only as a carrier of data, defining our own access methods and other instance methods would defy the purpose. Records can be used to reduce the work done by the developer, but internally the performance difference between a record and a class is not that wide

That’s it! Only 2 lines of code, that is all you need to implement those 80 lines of code using Record. To know how Java implements such a feature, we are going to learn how to set it up ourselves first. Now let us discuss the steps with visual aids demonstrating java records. Since Records is a feature of Java SE 14 we would need JDK 14 on our machine. Download Oracle JDK 14 from this archive for your machine. After downloading and installing JDK-14 to the Java folder along with any other java versions follow the below steps.

Note: For this tutorial Eclipse IDE is used.

Steps in setting up java records

Step 1: Create a new Java project and select JavaSE-14 as the execution environment. 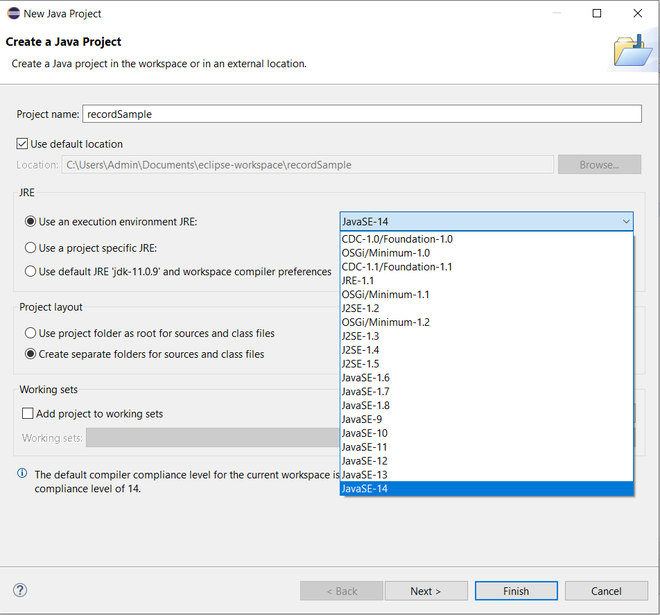 Step 2: If this is your first time using JDK-14 then there will be some more steps that you’ll need to follow in order to configure for records to work. You might see this type of exception mark on your project folder. 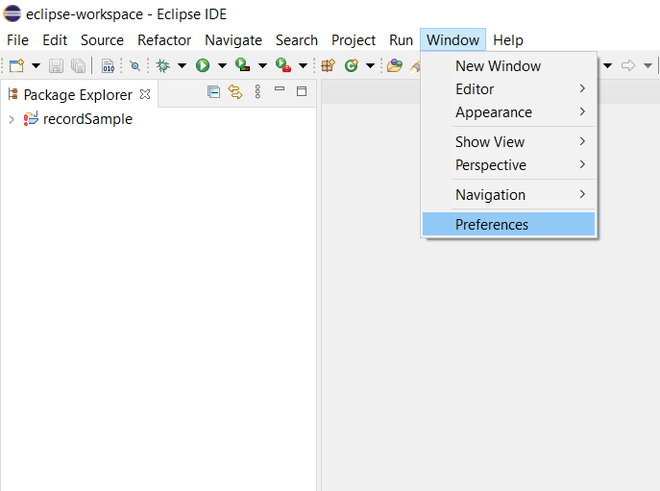 Step 4: In the Preferences window, click on Installed JREs and then click on Add as shown below: 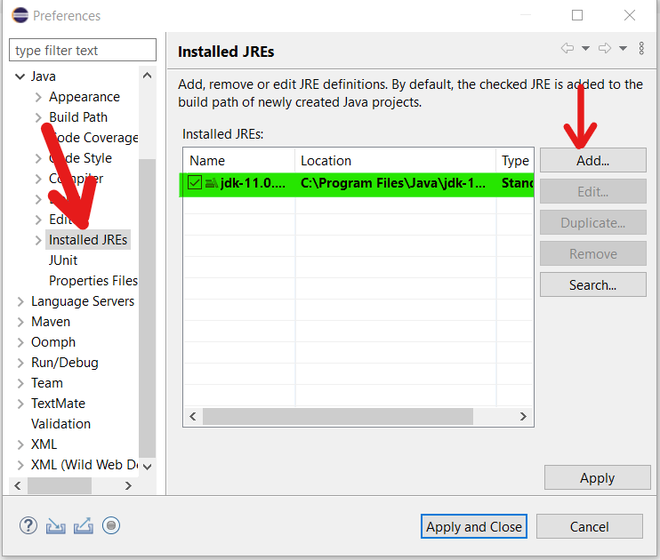 Step 5: Now on the Add JRE window that opens, select Standard VM and click Next. You’ll see a new window open to select a JRE, now click on Directory and navigate to where your jdk-14 is installed and select that folder. Click on Finish. 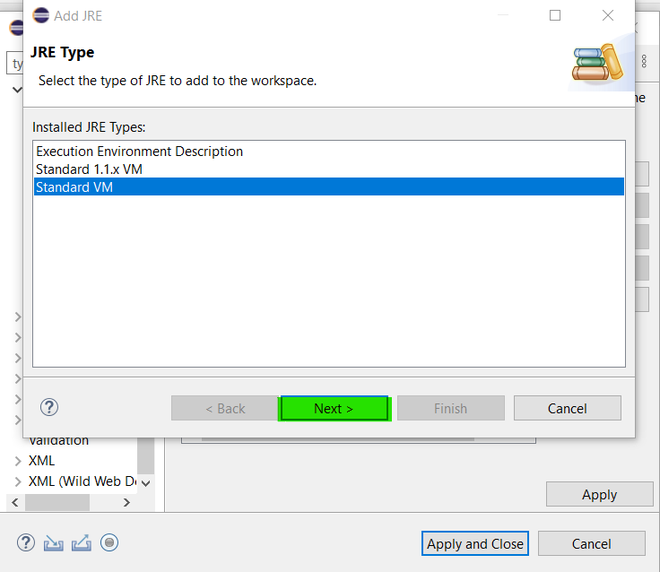 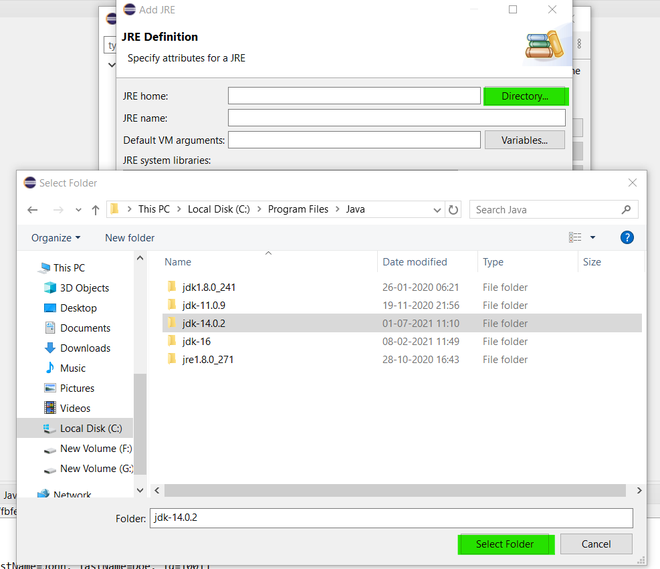 Step 6: Checkmark the JDK-14 that you just added and Apply it. 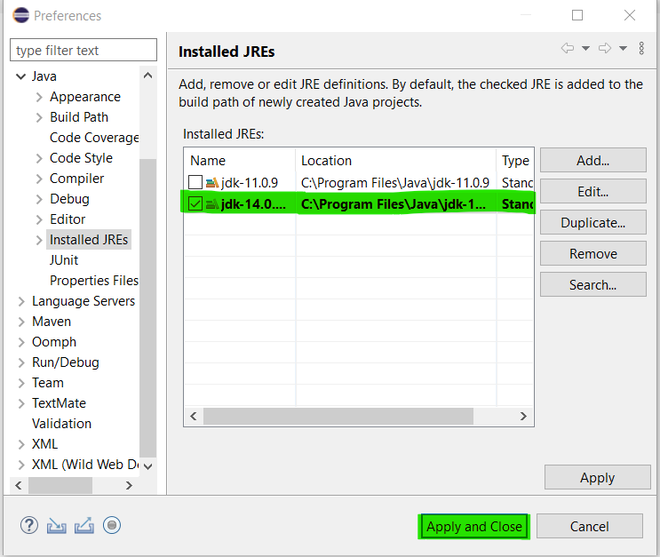 Step 7: We are not done yet. Since records are a preview feature, we need to enable them to use it. On your Project Explorer window on the left side, select your project and right-click and go to its Properties.

Step 8: On the window that opens, to the right of it, from the various options select Java Compiler. After that on the left side, uncheck the settings marked with red arrows in the image, and check mark the setting highlighted with green. Doing that will enable the preview features. 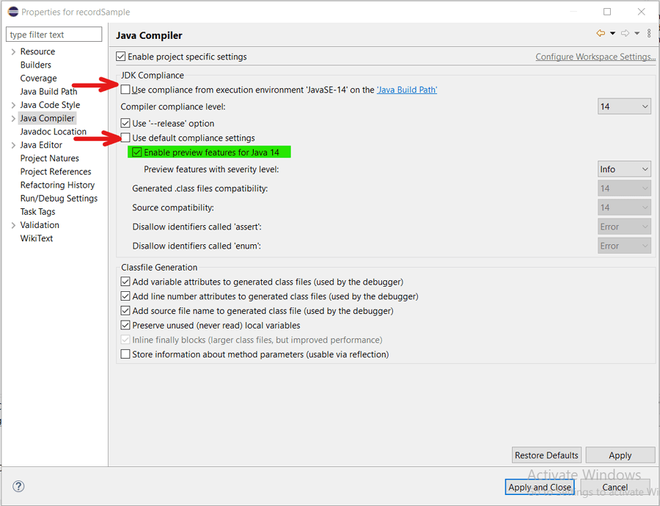 Step 9: After clicking on Apply and Close, you’ll see a prompt asking whether you want to rebuild the project. Select Yes.

After configuring the environment we can now proceed to write code for records.

Coding Records are declared by writing records instead of class in the class declaration. While defining a record, all the instance fields are written as parameters. The constructor, getter methods, toString(), equals(), and hashCode() are generated by the Java compiler during compile time. One thing to note here is that records do not provide setter methods, as it is expected that the value to instance variables is provided while creating the object.

We will notice that the getter methods are not similar in naming convention to the normal getter methods that are created (ex: getFirstName()), instead they are simply denoted by the name of the field (ex: firstName()). Now let us expand our previous example to test out these functionalities.

That is not all that a record can do. Records also provide us the capability to:

Geek, have you ever wondered what magic does the Compiler does?

As discussed above record is just a special declaration of a class and internally the compiler converts it into a normal class with some restrictions, which makes it different from the typical classes. When the Java file is compiled by the Java compiler to the bytecode, the .class file produced contains the extended declaration of the record class. By looking at that file we can make out more about records. Bytecode produced for the Employee record that we created above is as follows:

Conclusion: If we take some time to observe the bytecode, you will notice the following: