What are Chain or Multiple Stores?

Chain stores or multiple stores are retail networks owned and operated by manufacturers or intermediaries. A number of shops with similar appearances are established in localities spread across the country under this type of arrangement. These various stores typically sell standardised and branded consumer goods with an elevated turnover of sales. These stores are managed by the same company and have identical merchandising strategies, along with identical products and displays. 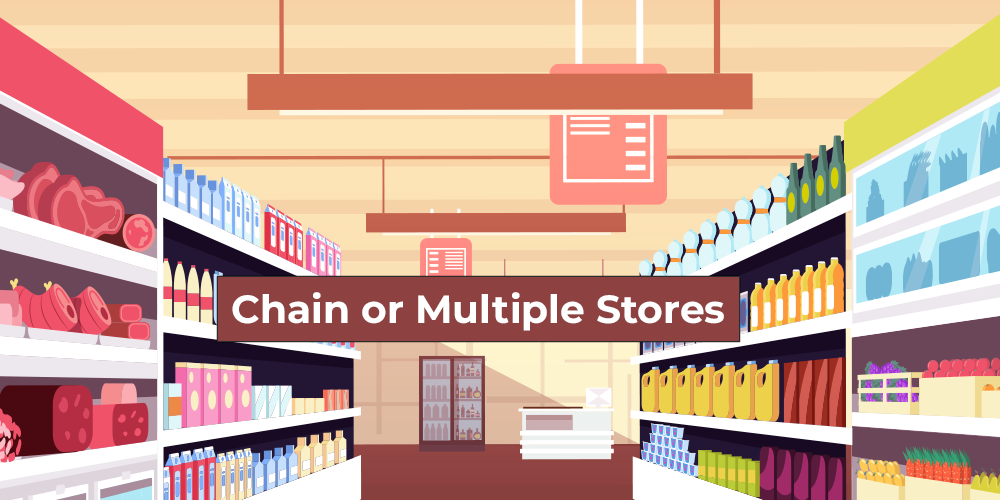 A chain store is a retail outlet with multiple locations that share a brand, centralised management, and standardised business practices. In many parts of the world, they have come to dominate the retail and dining markets, as well as many service categories.

The chain operation is most effective when dealing with high-volume merchandise with consistent sales throughout the year. Bata Shoe stores are typical examples of such stores in India. Similar retail outlets are emerging in other products as well. For example, D.C.M. exclusive showrooms, Raymonds, Nirula’s and McDonald’s fast food chains.

The features of Chain Stores are as follows:

1. Accessibility: These stores are located in reasonably populated areas where a sufficient number of customers can be approached. Rather than attracting customers to a central location, the idea is to serve them at a location close to their home or workplace.

2. Cost reduction: Merchandise manufacturing/procurement for all retail units is centralised at the head office from which goods are dispatched to each of these shops based on their needs. As a result, these stores’ operating costs are reduced.

3. Centralised Control: Each retail store is directly managed by a Branch Manager, who is held accountable for its day-to-day activities. The Branch Manager sends daily reports to the headquarters regarding sales, cash deposits, and stock requirements.

4. Supervision: The head office monitors all of the branches and is in charge of formulating policies and ensuring that they are implemented.

5. Transparency: The prices of goods in such stores are fixed, and all transactions are conducted in cash. The cash flows from merchandise sales are deposited daily into a local bank account on behalf of the head office, and a report is sent to the head office in this regard.

6. Regular Inspection: The head office usually appoints inspectors who are in charge of the day-to-day supervision of the shops, including the quality of customer service provided, adherence to head office policies, and so on.

7. Prices: Prices of goods are centrally fixed at all the stores.

8. Window Dressing: All the stores are decorated in the same setting and style. 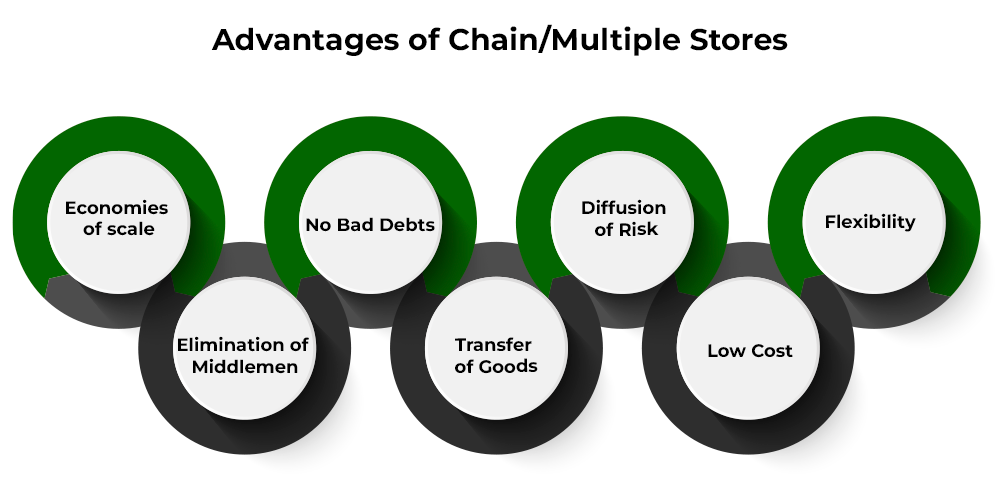 Multiple stores provide various advantages to their customers, which are described below :

2. Elimination of Middlemen: The multiple-shop organisation can eliminate unnecessary middlemen in the sale of goods and services by selling directly to consumers.

3. No Bad Debts: Even though all sales in these shops are made in cash, there are no losses due to bad debts.

4. Transfer of Goods: Goods that are not in demand in one location may be transferred to another location where they are in demand. This reduces the possibility of dead stock in these stores.

5. Diffusion of Risk: Losses in one shop may be offset by profits in other shops, lowering an organization’s overall risk.

7. Flexibility: Under this system, if a shop is not profitable, the management may decide to close it or relocate it without affecting the overall profitability of the organisation.

The disadvantages of Chain/Multiple Stores are as follows:

1. Limited Selection of Goods: Some multiple stores only sell a limited number of products. This is especially the case of chain stores, which are owned and operated by manufacturers and, as a result, primarily sell their own products. They do not sell products made by other companies. As a result, consumers have a limited selection of goods. This is not the case with retailer-owned chain stores like Big Apple or Reliance Retail, which sell products from a variety of manufacturers.

2. Lack of Initiative: The personnel in charge of the multiple stores must follow the instructions issued by the head office. This makes them accustomed to looking up to headquarters for guidance on all matters and takes away their initiative to use their creative skills to satisfy customers.

3. Lack of Personal Touch: A lack of initiative in employees can lead to indifference and a lack of personal touch.

4. Difficult to Change Demand: If demand for the merchandise handled by multiple shops changes quickly, management may be forced to incur huge losses due to large stocks remaining unsold at the central depot.

5. No Credit Facility: Credit facility is not provided by Chain/Multiple stores as they deal on cash basis, and because of this, it discourages certain class of customers.

6. Huge Capital Requirements: Huge capital is required in the establishment of Chain stores. So, chain stores may be run only by a company, which has considerable financial resources.