If you’re connected with the term ‘Web Scraping’ anyhow, then you must come across a question – Is Web Scraping legal or illegal? Okay, so let’s discuss it. If you look closely, you will find out that in today’s era the biggest asset of any business is Data! Even the top giants like Facebook, Amazon, Uber are ruling because of the vast amount of data they hold. And what if someone extracts all this data from the owner’s website within a few minutes? Yes, this is where Web Scraping comes in. 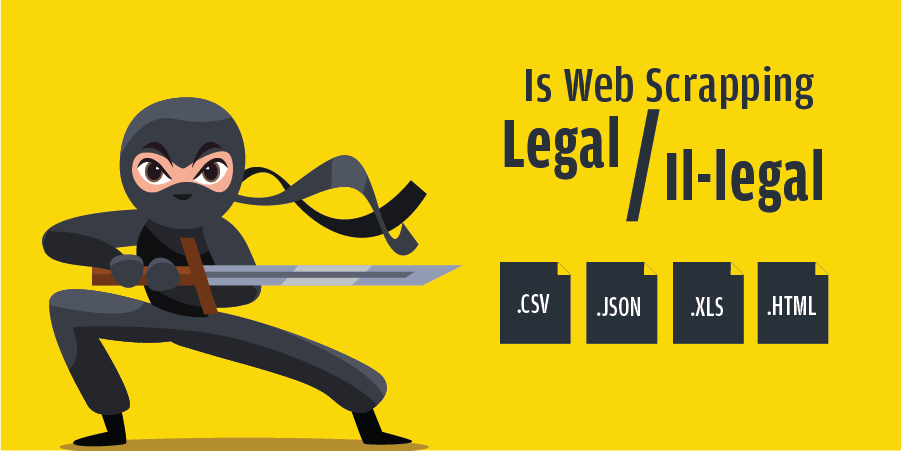 Web Scraping is the process of automatically extracting data and particular information from websites using software or script. The extracted information can be stored in various formats like SQL, Excel, and HTML. There are a number of web scraping tools out there to perform the task and various languages too, having libraries that support web scraping. Among all these languages, Python is considered as one of the best for Web Scraping because of features like – a rich library, easy to use, dynamically typed, etc. Beautiful Soup and Scrapy are such libraries of Python that supports web scraping. Now, you must be thinking that why does someone try to extract such vast data from websites or what are the benefits behind doing Web Scraping. As we stated above how much valuable the data is for a business so if you get to access over that data through Web Scraping, it can be used for various purposes such as –

Okay, so get back to the point from where we started – Is it legal to do Web Scraping or not? However, doing Web Scraping is technically not any kind of illegal process but the decision is based on further various factors – How do you use the extracted data? or Are you violating the ‘Terms & Conditions’ statements?, etc. Let us take an example, Suppose you allow someone to enter your residence from Main Gate in general, But the person is preferred to come over through crossing Boundary Wall. So, will you allow the person to enter in your residence? Similarly, the data displayed by most of the websites are generally accessible to the public as it is legal to store that data in your system for personal use. But in case you are looking forward to using it as your own without the consent of the owner and by violating the ‘Terms & Conditions’ Guidelines, here it will be treated as illegal. However, the law regarding Web Scraping is not transparent but there are still some regulations in which you can fall for doing unauthorized web scraping. Some of these are listed below:

LinkedIn Vs HiQ You can say ‘LinkedIn vs HiQ’ is one of the biggest legal disputes about data scraping. HiQ is a data analytics firm that came in a legal dispute with LinkedIn when the latter sent an official letter to HiQ demanding it to stop scraping the site. But LinkedIn got a counter-attack from HiQ as they stated that the data of LinkedIn is accessible to anyone who visits it and there is nothing false in scraping the publicly available data. However, the final decision was not praiseworthy by LinkedIn as the court banned the company from blocking HiQ’s requests to scrape data from publicly available profiles on the platform. This case has something different as unlike earlier Web Scraping legal disputes, here the court did not favor the company whose data was being scrapped. Facebook Vs Power Ventures ‘Facebook Vs Power Ventures’ is also a well-known legal dispute regarding data scraping. It is a legal action brought by Facebook claiming that Power Ventures Inc. has gathered the user data from Facebook and use it on their website. Facebook alleged that the company had violated the Computer Fraud and Abuse Act (CFAA), and the California Comprehensive Computer Data Access and Fraud Act. As per Facebook, Power Ventures also violated the CAN-SPAM Act by using Facebook’s identity while doing the process of extracting user data. In the defense, Power Ventures stated that Facebook’s DMCA claim was not sufficient to be considered. They also said that the unauthorized access was not met because the users are actually accessing their own data on Facebook via Power Ventures platform. Although, despite all these arguments, the court’s decision came in favor of Facebook. Okay, after getting to the point whether doing Web Scraping is legal or illegal depends upon how you perform the scraping and how you use the data. Now, take a look at those strategies which you should follow while doing Web Scraping –

From all the above discussion, it can be concluded that Web Scraping is actually not illegal on its own but one should be ethical while doing it. If done in a good way, Web Scraping can help us to make the best use of the web, the biggest example of which is Google Search Engine. So, do not give any reason to the target site owner to block or even sue you by any wrongdoings and respect the Terms of Service (ToS) of other sites as well.