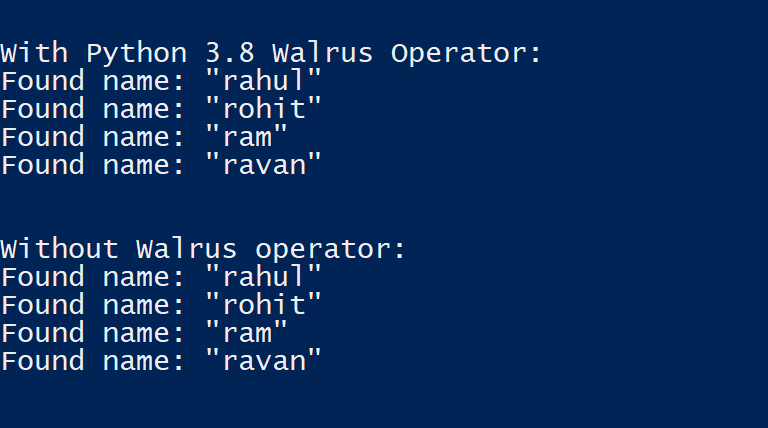 My Personal Notes arrow_drop_up
Next
string capitalize() in Python
Recommended Articles
Page :
Benefits of Double Division Operator over Single Division Operator in Python
12, Feb 20
Python | Operator.countOf
04, Jan 19
Python | List comprehension vs * operator
30, Aug 19
Check if a value exists in a DataFrame using in & not in operator in Python-Pandas
29, Jun 20
Concatenate two strings using Operator Overloading in Python
05, Jul 20
What is a modulo operator (%) in Python?
15, Jul 20
Python - Star or Asterisk operator ( * )
24, Nov 20
What does the Double Star operator mean in Python?
24, Nov 20
Difference between != and is not operator in Python
10, Dec 20
Create multiple copies of a string in Python by using multiplication operator
03, Jan 21
Python MySQL - LIKE() operator
24, Apr 21
Python MySQL - BETWEEN and IN Operator
25, Apr 21
Python OR Operator
18, Oct 21
Python NOT EQUAL operator
12, Sep 21
How to use the IN operator in SQLAlchemy in Python?
27, Jan 22
Operator Functions in Python | Set 1
16, Sep 16
Operator Functions in Python | Set 2
30, Dec 16
Operator Overloading in Python
10, Dec 18
Ternary Operator in Python
15, Jul 16
Difference between == and is operator in Python
03, Jan 18
New '=' Operator in Python3.8 f-string
26, May 20
Bitwise Complement Operator (~ tilde)
08, Dec 21
Important differences between Python 2.x and Python 3.x with examples
25, Feb 16
Python | Merge Python key values to list
31, Jul 19
Article Contributed By :