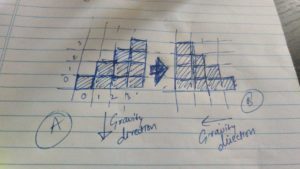 Problem if analysed properly was actually a simple sorting problem. He asked some follow up questions on criteria on which we select any sorting algorithms (stable, in-place etc.).

-You are given an array of linked lists. Some of these lists are intersecting linked lists (having common nodes and then merging to one). So for example if there is a list of four nodes at 0th index it’s possible there is another list at some other index, say 1st index whose nodes merges to any of the nodes in 0th list. So find the number of connected groups in this structure. I used Disjoint set data structure to solve this problem.

Discussion on projects
Check if a given expression is valid or not. For example ((A+B/C)*(D-F)) is valid. And )*A+B) is not.
Discussion around Api url formats and various rest verbs
Discussion around various testing strategies (Unit, Smoke, Integration, API automations etc..).

This was a bar raiser round.

Q1: You are given size of a line line of people, say n and these n people can stand in any order and all of these n folks has distinct heights. Now from either end of the line you can see say p and q folks. Now here it’s possible some of the short height folks may be hidden behind taller folks.
For a given n, p and q find how many arrangements of all people is possible.

Q5: there are three person in a room say P1, P2, P3 all these people have some salaries say S1, S2 and S3. Now no person is willing to share his salary directly or indirectly from which individual salary can be deduced. You need to find a way to directly find the sun of salaries of all 3 folks.

Q6: Given a histogram having bars of width 1 unit and varying height, find the maximum area of a rectangle that can be formed within bar. (Rectangle formed should be contained inside bars).