Vue.js is a progressive javascript framework for developing web user interfaces. It is a performant, approachable, and versatile framework. We can create Single Page Applications as well as Full Stack applications. It is built on top of HTML, CSS, and Javascript which makes it easier for developers to integrate Vue.js in any application at any stage.

The Custom Directives allow the developers to create and use some custom functions easily on the elements. Like the in-built directives that are like v-model, v-for, v-if, etc., we can create our own directives which will according to what we set it. It allows reusing some logic by having access to the lower level of DOM. We can also pass data to the custom directives.

Vue.js Custom Directives with Object Literals allows us to pass multiple values to the directive as a JSON object. In the binding value, we will receive the values by their name.

Syntax: Passing the multiple values as an object literal to the directive as follows:

Example: In the following example, we have a directive to style a div container and to style an input. We have provided the fields which we may or may not use on your choice. This provides an easy way to apply styles to our elements and can be extended further. 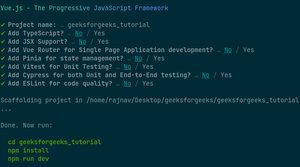 Project Structure: After successful installation, the following project structure will be formed. 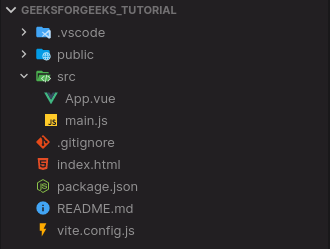 Step 3: In the script section of the App.vue file, create a custom directive and name it as decorate. In the mounted section and the updated section, add the element and the binding fields. Now modify the values accordingly. In this tutorial, we are going to modify the border-radius, colour, background color, and the placeholder text. Finally, export the directive.

Step 4: In the template section of the App.vue file, add an input and div element and add the values as you wish.

Here is the full code.

Step 5: Run the project using the following command and see the output.

Output: On successfully building the project, open http://localhost:3000, and the result will be as follows.

My Personal Notes arrow_drop_up
Previous
Vue.js Transitioning between the Components
Next
Angular MDBootstrap Forms Radio Component
Recommended Articles
Page :
Vue.js Custom Directives with Function Shorthand
06, Apr 22
Vue.js Custom Directives with Components
06, Apr 22
Difference between VueJS and AngularJS
20, Sep 19
Adding Filters in VueJS
19, Nov 20
How to loop through a list of elements and display it in VueJS ?
10, Feb 21
Capitalizing a string using filters in VueJS
21, Feb 21
How to check given string is Palindrome or not using filter in VueJS ?
22, Feb 21
How to convert a normal string to a uppercase string using filter in VueJS ?
22, Feb 21
Building a Shopping List with VueJS
30, May 21
How to check an image is loaded or not in VueJS ?
23, Jul 21
What is the difference between created and mounted event in VueJS?
06, Aug 20
AngularJS | Directives
18, Jul 19
What is the difference between ng-if and data-ng-if directives ?
23, Jul 19
Angular 7 | Directives
18, Nov 19
Structural Directives in Angular
31, Jul 20
AngularJS Directives Complete Reference
15, Oct 20
What is the role of ng-app, ng-init and ng-model directives in AngularJS ?
23, Jul 21
What is the use @error and @debug directives in SASS ?
17, Aug 21
Directives in JSP
20, Aug 18
What are Directives in AngularJS ?
01, Jul 22
JavaScript | template literals
23, Oct 19
How to concatenate regex literals in JavaScript ?
04, Jun 20
JavaScript SyntaxError - "0"-prefixed octal literals and octal escape sequences are deprecated
31, Jul 20
What are the template literals in ES6 ?
07, Oct 21
Article Contributed By :