Data visualization is the process of representing the available data diagrammatically. There are packages that can be installed to visualize the data in languages like Python and Julia. Some of the reasons that make the visualization of data important are listed below:

The package that is used widely with Julia is Plots.jl. However, it is a meta-package that can be used for plotting. This package interprets the commands are given and plots are generated using some other libraries and these libraries are referred to as backend. The backend libraries available in Julia are :

One can make plots using these Plots.jl alone. For that, the package has to be installed. Open the Julia terminal and type the following command :

The backend packages can also be installed in the same way. This article shows how to plot data using Plots.jl for two vectors of numerals and two different datasets. For using the datasets, packages like RDatasets and CSV has to be installed. The command used for installation is given below.

The single-dimensional vectors can be plotted using simple line plots. A Line plot needs two axes (x and y). For example consider a vector that has values from 1 to 10 which forms the x-axis. Using rand(), ten random values have been generated and that forms the y-axis. The plotting can be done using the plot() function as follows. 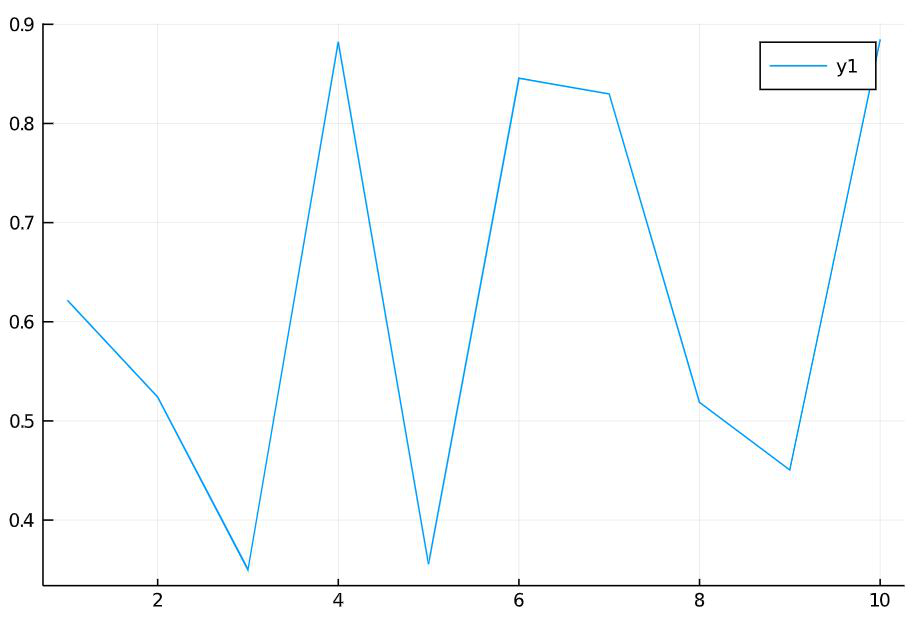 The graphs can be stylized using various attributes. Some of the attributes are explained with the example below: 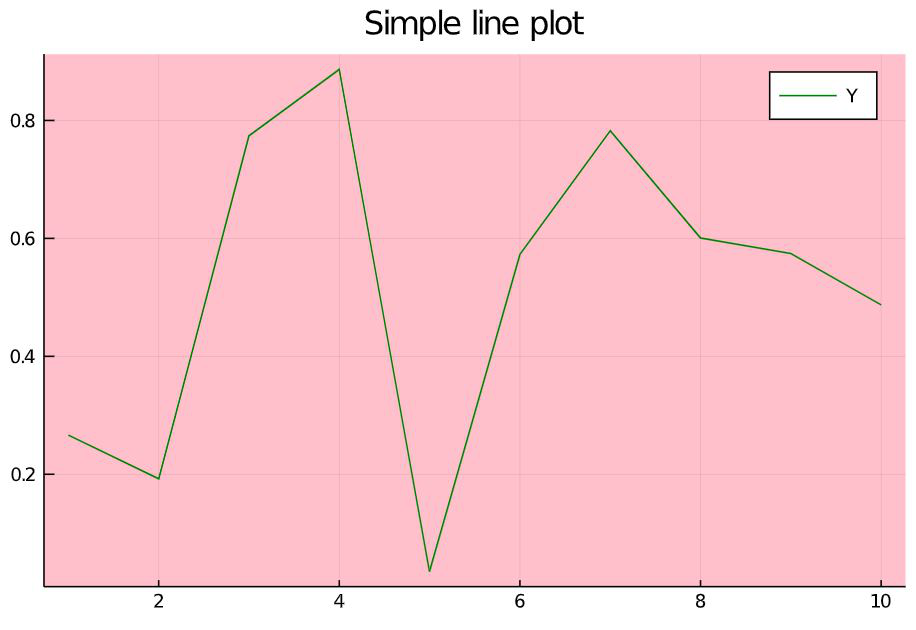 In Julia, one can plot another vector on the previously plotted graph. The function that allows this plot!(). In Jupyter notebook, one has to write the code snippet of the previous example first and then can write the on given below even in a new cell. 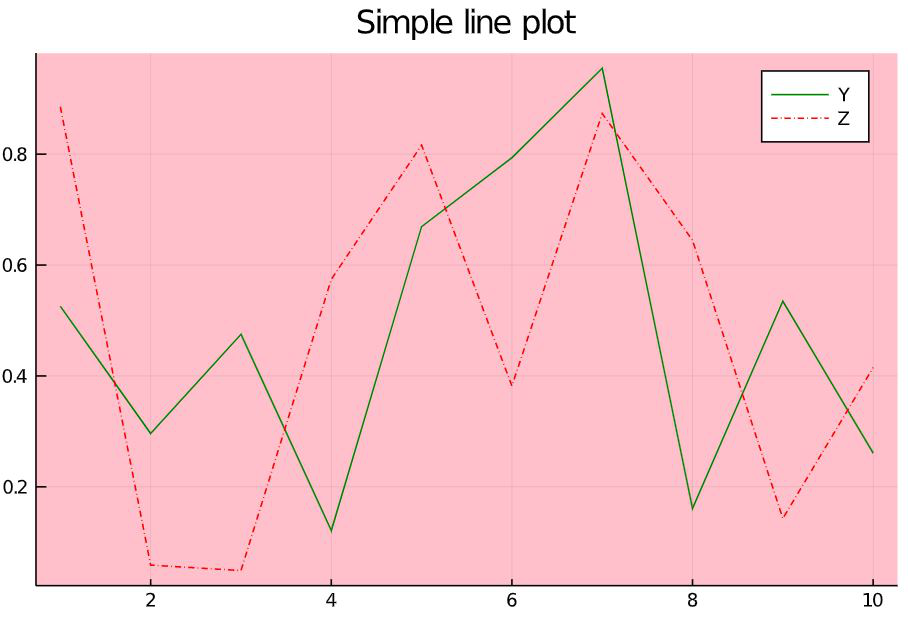 Here one can find the dashed line plotted on the previous graph. The styles written here are applied for the new line alone and it does not affect the line plotted previously.

The datasets used for example here are mtcars and Prisma-Indian Diabetes datasets. To understand each attribute, in each of the example new attribute will be added and explained below it. However, all the styling attributes can be used with any plotting. The mtcars dataset contains information on 32 automobiles models that were available in 1973-74. The attributes in this dataset are listed and explained below:

First this dataset can be visualized.

A simple bar graph can be used to compare two things or represent changes over time or to represent the relationship between two items. Now in this dataset there are 32 unique models which are to be used as the x-axis for plotting the bar graph. The MPG (Miles Per Gallon) is taken in the y-axis for plotting. Look at the code snippet and its output below. 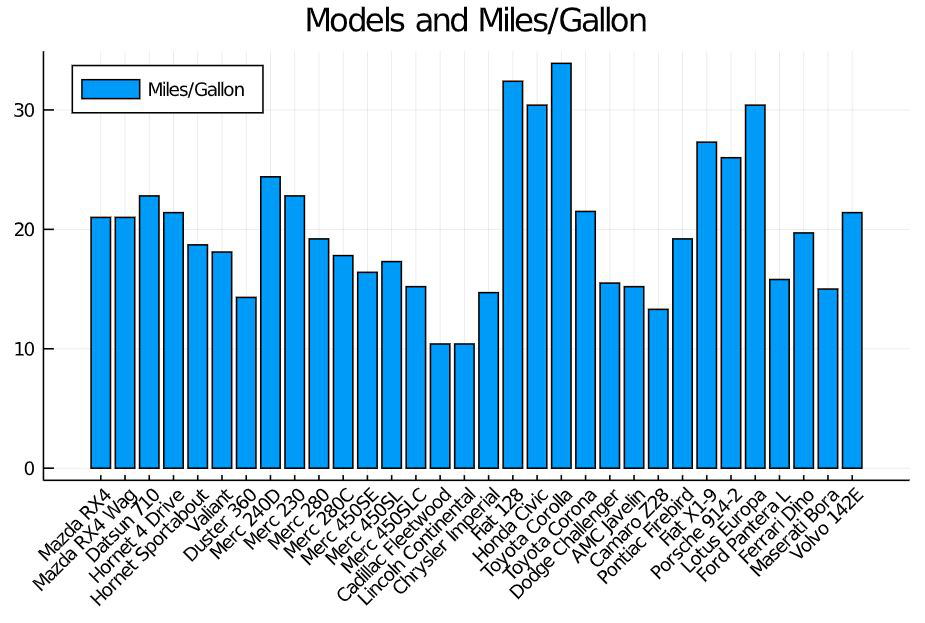 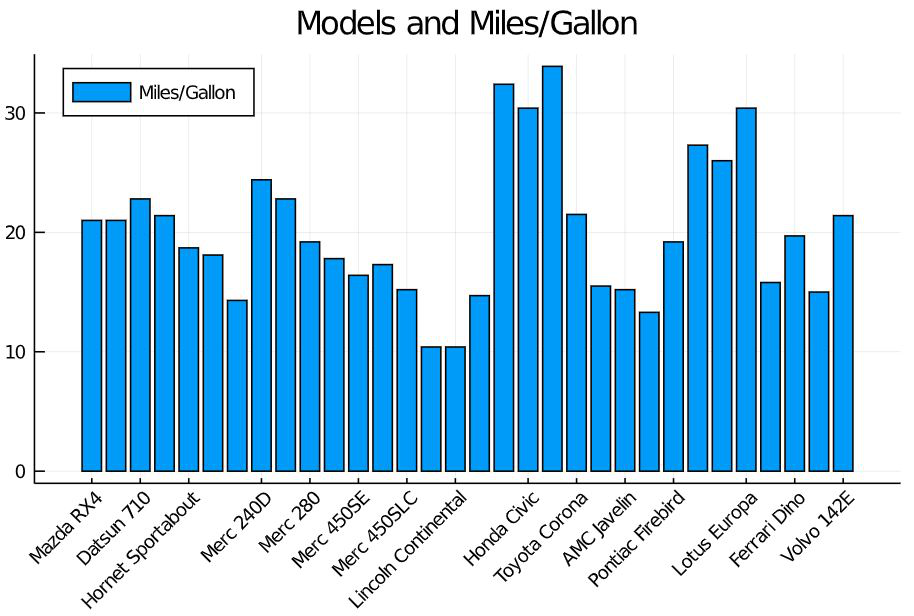 To plot two attributes of the dataset in the same graph 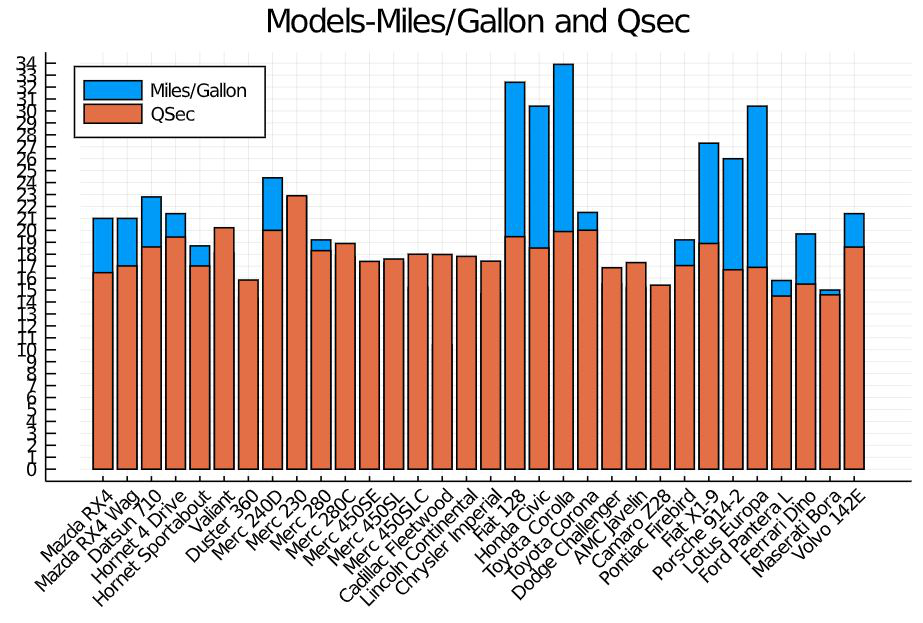 The line plot which was previously explained with vectors can be used along with the datasets also. If three attributes were passed, then the graph will be plotted with 3 dimensions. For example: Plotting the Number of gears in the x-axis, displacement in the y-axis, and Horse Power in the z-axis. 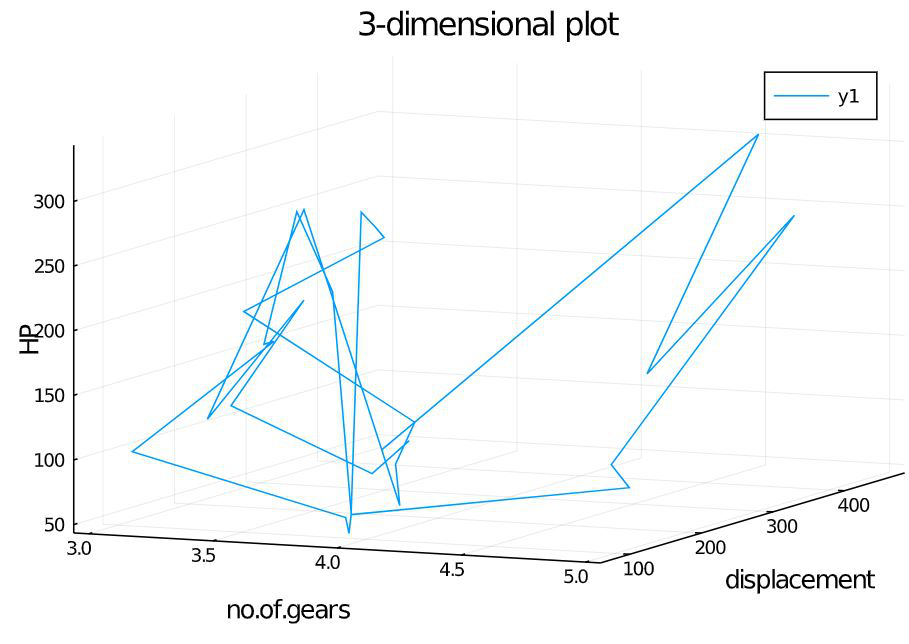 The attributes xlabel, ylabel, zlabel  contains the values that should be displayed as the label for each axis. Here the labels are no.of.gears, displacement and HP.

The dataset Prisma-Indian Diabetes dataset is shown here to give a understanding of how to read the dataset which is in the local storage.  This dataset has the attributes namely, pregnancies (no.of.times pregnant), glucose, bp (blood pressure), skinThickness, insulin, bmi, dpf (diabetes pedigree function), age, outcome (0 – non diabetic, 1-diabetic). Download this dataset from internet initially.

It is used to reveal a pattern in the plotted data. For example, we can use this plot to analyze the diabetes pedigree function form any pattern with age. Look at the code snippet below. 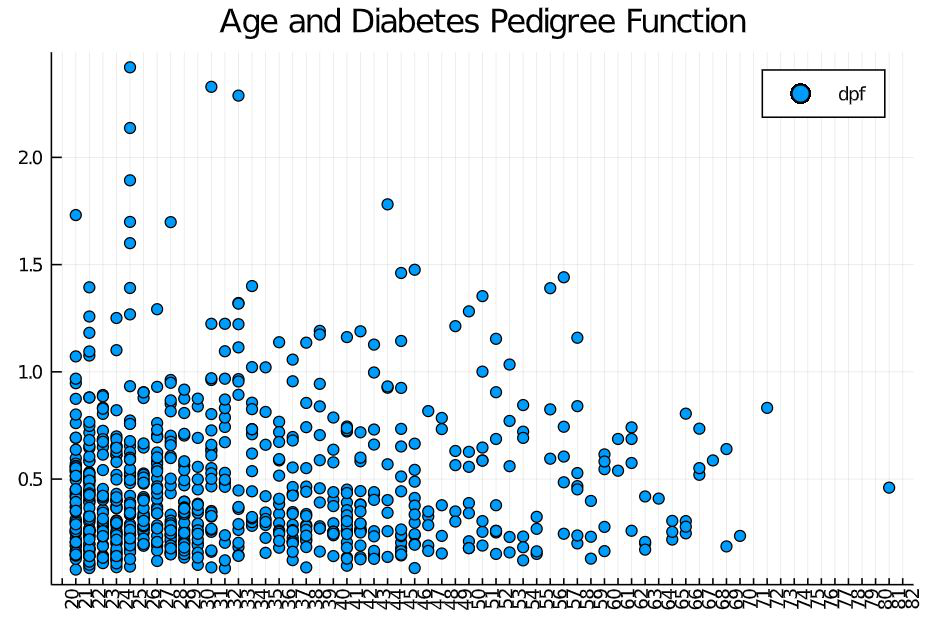 Mostly used for displaying the frequency of data. The bars are called bins. Taller the bins, more number of data falls under that range. For example, let us check the number of people in each age group in the taken dataset using a histogram. Look at the code snippet below: 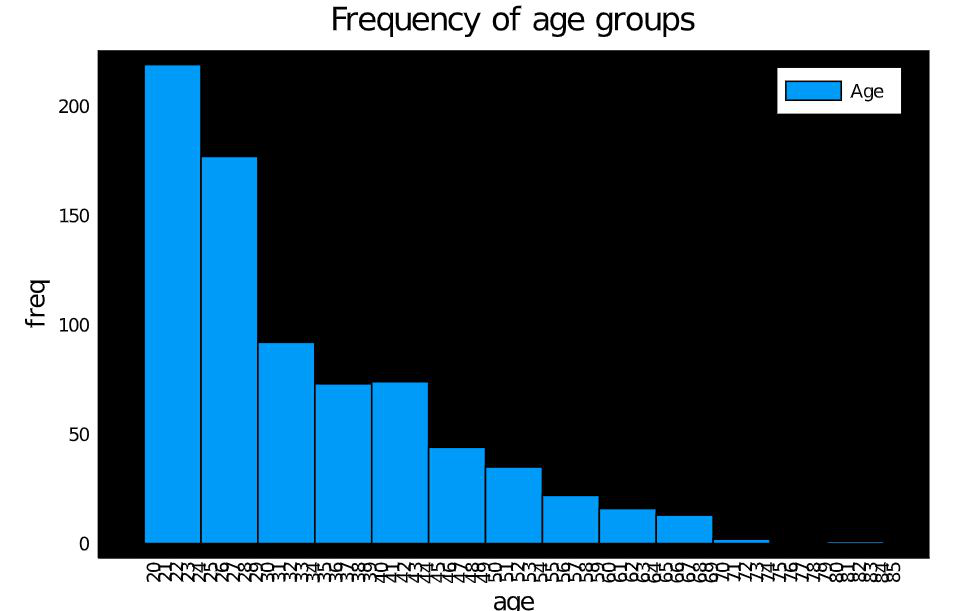 Pie chart is a statistical graph used to represent proportions. In this example let us represent the number of diabetic and non-diabetic people in the dataset. For this, the count has to be taken first and then plotted in the graph. Look at the code snippet below. 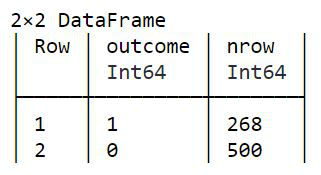 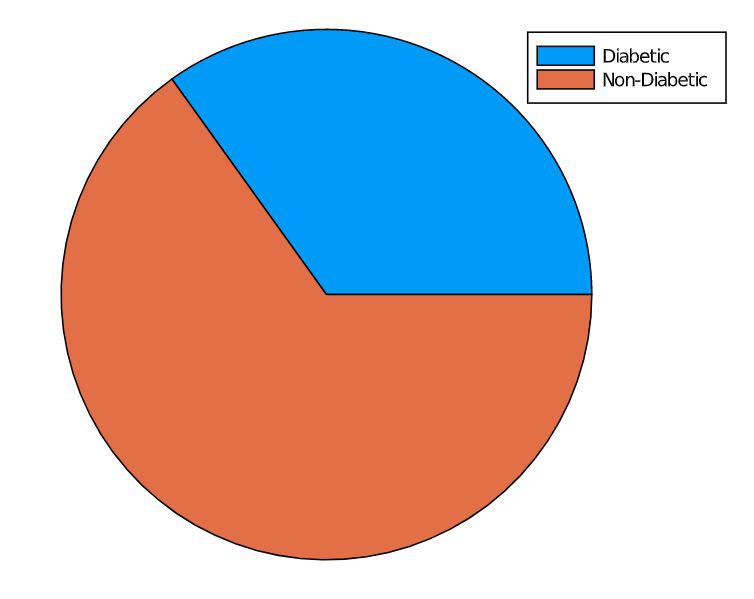