Variation in Acceleration due to Gravity

The orbits of artificial satellites are the greatest way to assess the potential for play an intermediary role and global geophysics. Surface gravity measurements are ideal for local geophysics, which studies the structure of mountains and seas as well as the hunt for minerals. In order to understand how the value of acceleration due to gravity affected lets first under its basics as:

What is Acceleration to Gravity?

Gravity is the universal force of attraction that exists between all things or matter in the universe.

Gravity is largely influenced by the following factors:

Formula of Acceleration due to Gravity

We know that, the force on anybody is given by,

where F is the force acting, g is the acceleration due to gravity, m is mass of the body.

And according to the universal law of gravitation,

Since, the height is negligibly small compared to the radius of the earth rearrange the above expression as,

Now equating both the expressions, 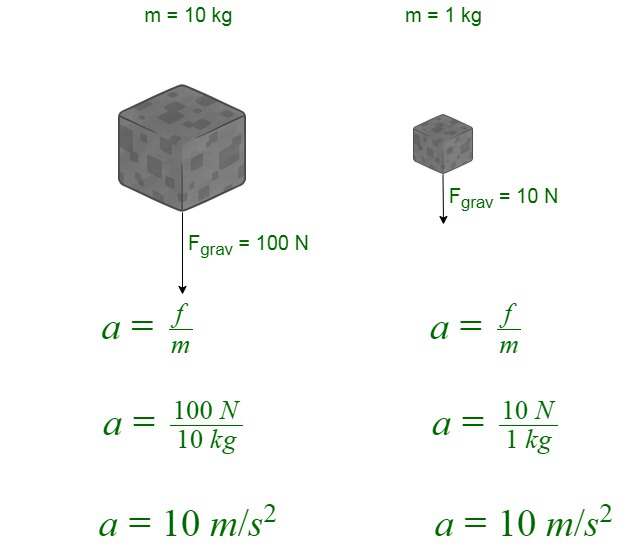 Factor affecting the value of Acceleration due to Gravity

There are various facts that affects the value of g, that are:

Lets discuss each case in more detail as:

Variation of g with Height

Consider a sample mass (m) at a height (h) above the earth’s surface. Now, the gravitational force exerted on the test mass is:

where R and M are the radius and the mass of the earth. Then, the acceleration due to gravity at a certain height is ‘h’. So,

This is the acceleration due to gravity at a height above the earth’s surface. According to the above formula, the value of g decreases with increasing height of an object and becomes zero at infinite distance from the earth. 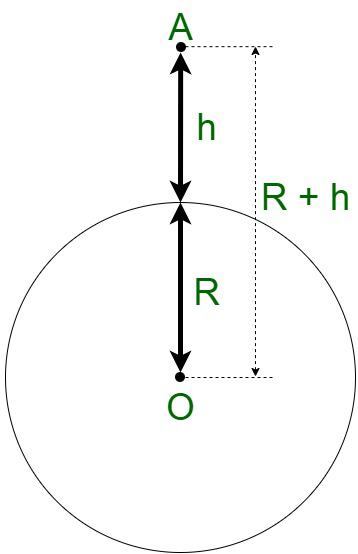 Variation of g with Depth

Suppose we consider a body of mass m is at a point B where B is at a depth of h from the earth’s surface, and its distance from the center is R – h. 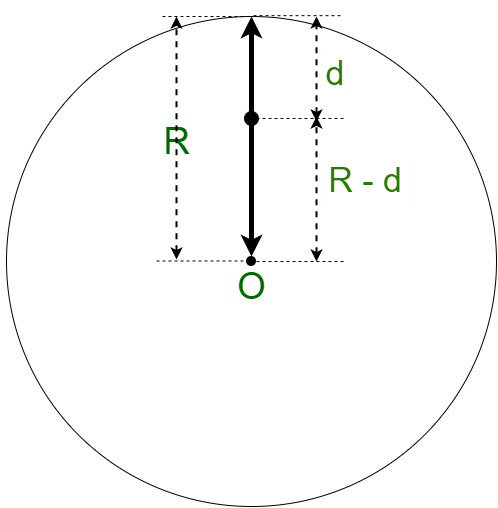 The acceleration due to gravity (gd), at this depth, is given by, 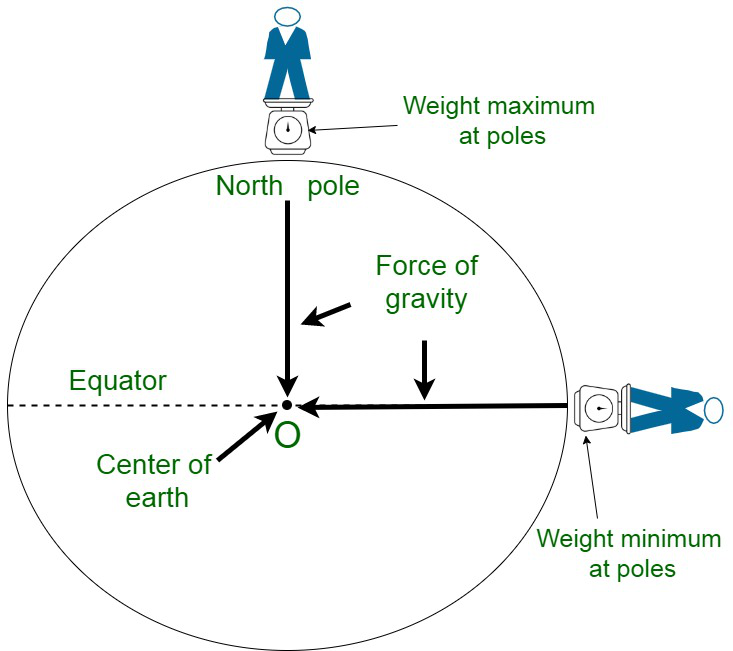 But the value of g changes even on the surface of the earth also. For example, g is the highest on the poles and lowest on the equator.

Variation of g due to Shape of the Earth

The earth is not perfectly spherical but is an oblate spheroid. The polar radius (radius near poles) earth’s is 21 km smaller than its equatorial radius (near the equator). Earth is not spherical, but actually, it is bulged out as shown below. 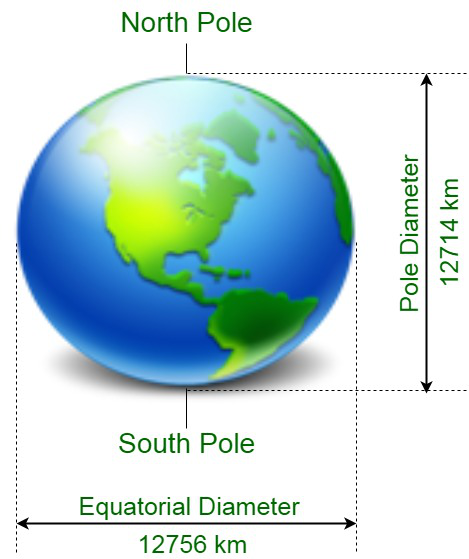 Suppose we consider the shape of the earth as slightly elliptical. So, we will have different distances from the pole and the equator from the center. 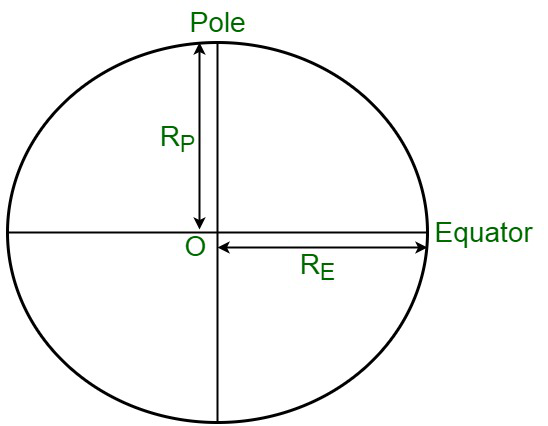 So, the distance between the pole (RP) and the equator (RE) from the center is as,

And, from observation, we have the relation between RE and RP as,

Then, if we consider G and M as constants in the acceleration formula, then,

So, the gravitational accelerations on the equator and pole are given by,

Here, from the distances between the poles and the equator, we have the relationship of gravitational acceleration as, 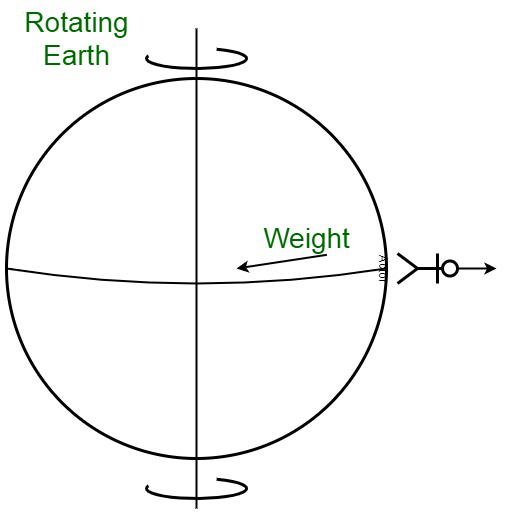 Variation of g due to Rotation of Earth

Consider a sample mass (m) that is located on a latitude that forms an angle with the equator. As we have seen, when a body rotates, every particle in the body moves in a circular motion around the axis of revolution. In this instance, the earth rotates with a constant angular velocity, while the test mass travels with an angular velocity in a circular path of radius ‘r’. 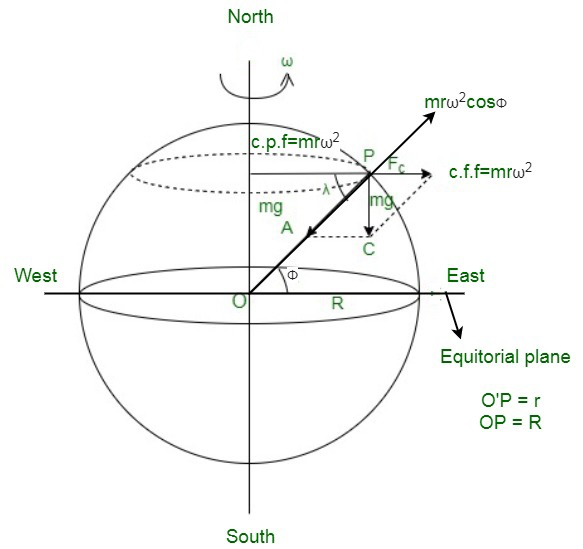 where r is the radius of the circular path followed which is, r = R cosθ.

Therefore, the above expression becomes,

Also, both g and g’ are related at different position on earth given as,

Problem 1: A man, Ravi, weighs on the surface of the earth. At what height will Ravi’s weight become half, which is reduced to W/2? Assume the radius of the earth to be R.

Radius of the Earth = R

We have to find R, 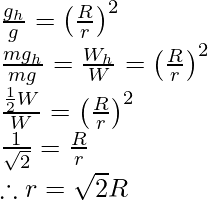 Therefore, at the height of 0.414R, a man’s weight becomes half his weight on the surface of the earth.

Problem 2: The earth is assumed to be spherically homogeneous for all practical purposes. Find the acceleration due to gravity at a depth of 2000 km beneath the surface of the earth. [Use: R = 6400 km and g = 9.8 m/s2.]

We have to find acceleration due to gravity gd 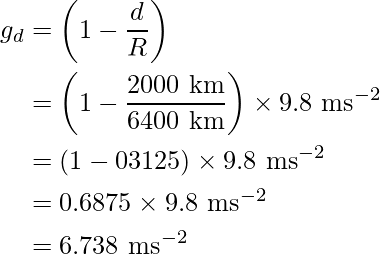 Problem 3: Point P is located at the surface of the earth, with a radius of 6400 km. The particle accelerates downward with a constant acceleration to reach a point Q situated at a depth d is equal to 1600 km from the earth’s surface. Find the reduction witnessed in the acceleration due to gravity at Q.

We have to find the decrease in value of acceleration due to gravity i.e. g – gd 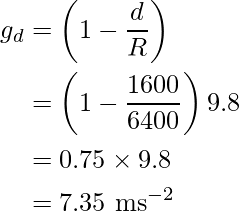 Therefore, the decrease in acceleration due to gravity is 2.45 m/s2.

Problem 4: A person weighs 50 kg on Earth. On the surface of Neptune, where the acceleration of gravity is approximately 1.2 times as great as that on Earth, what will be the person’s mass?

The person will weigh 50 kg on the surface of Neptune because the force of gravity changes the weight of the object and not it’s mass. The mass of an object stays constant regardless of the forces acting upon it.

Consider the height above earth surface be h’.