When memory management and maintaining state between the value generated become a tough job for programmers, Python implemented a friendly solution called Generators. 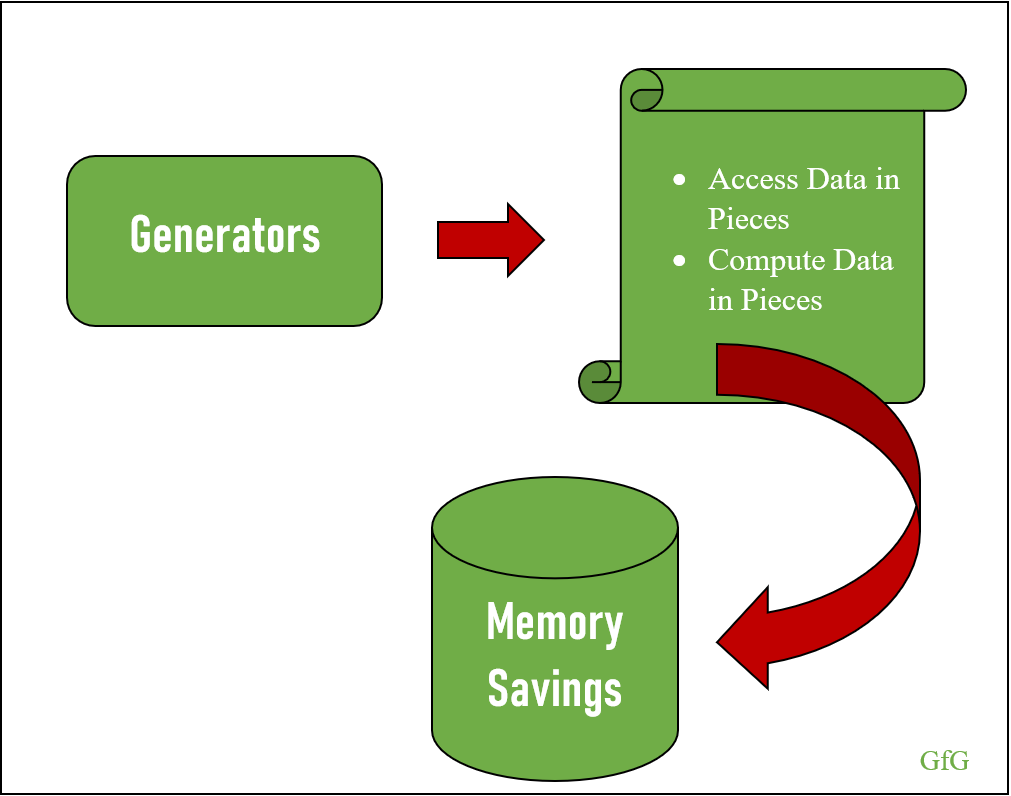 With Generators, functions evolve to access and compute data in pieces. Hence functions can return the result to its caller upon request and can maintain its state. Generators maintain the function state by halting the code after producing the value to the caller and upon request, it continues execution from where it is left off.
Since Generator access and compute value on-demand, a large chunk of data doesn’t need to be saved in memory entirely and results in substantial memory savings. 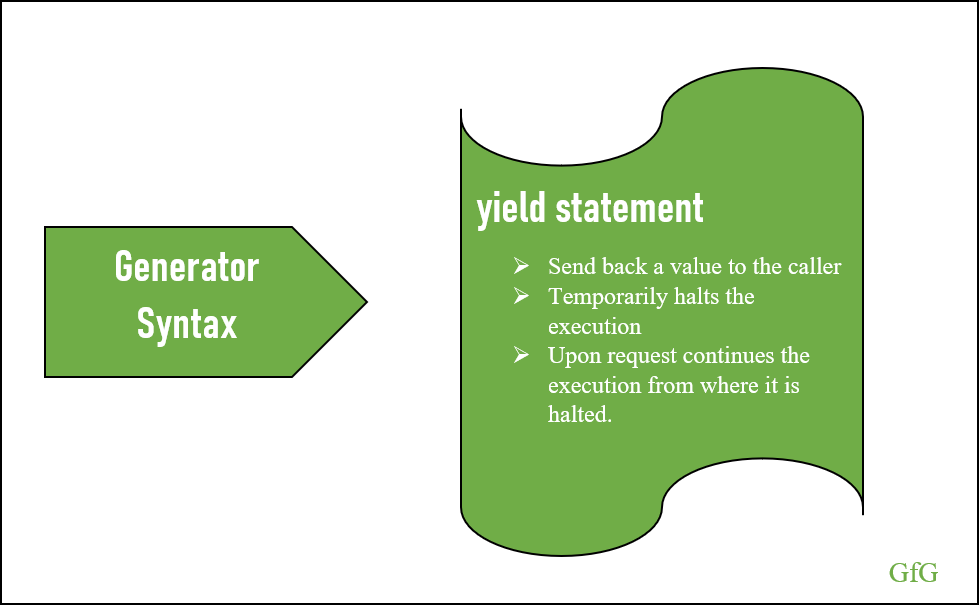 We can say that a function is a generator when it has a yield statement within the code. Like in a return statement, the yield statement also sends a value to the caller, but it doesn’t exit the function’s execution. Instead, it halts the execution until the next request is received. Upon request, the generator continues executing from where it is left off.

next, stopIteration and send

How the caller and generator communicate with each other? Here we will discuss 3 in-built functions in python. They are:

The next function can request a generator for its next value. Upon request, the generator code executes and the yield statement provides the value to the caller. At this point, the generator halts the execution and waits for the next request. Let’s dig deeper by considering a Fibonacci function.

Below code explains the scenario.

The above exception was the direct cause of the following exception:

So far, we have seen how generator yield values to the invoking code where the communication is unidirectional. As of now, the generator hasn’t received any data from the caller.
In this section, we will discuss the `send` method that allows the caller to communicate with the generator.

At this point, the caller uses the `send` method and provide the data ‘5`. Hence generator executes from where it is left off i.e. saves the data sent by the caller to the `response` variable (response = yield factorial). Since the `response` contains a value, the code enters the `if` condition and assigns the response to the `num` variable.

Now the flow passes to the `while` loop and determines the factorial and is yielded to the caller. Again, the generator halts the execution until the next request.

If we look into the output, we can see that the order got interrupted after the caller uses the `send` method. More precisely, within the first 3 requests the output as follows:
Factorial of 1 = 1
Factorial of 2 = 2
Factorial of 3 = 6

But when the user sends the value 5 the output becomes 120 and the `num` maintains the value 5. On the next request (using `next`) we expect num to get incremented based on last `next` request (i.e. 3+1 = 4) rather than the `send` method. But in this case, the `num` increments to 6 (based on last value using `send`) and produces the output 720.

The below code shows a different approach in handling values sent by the caller. 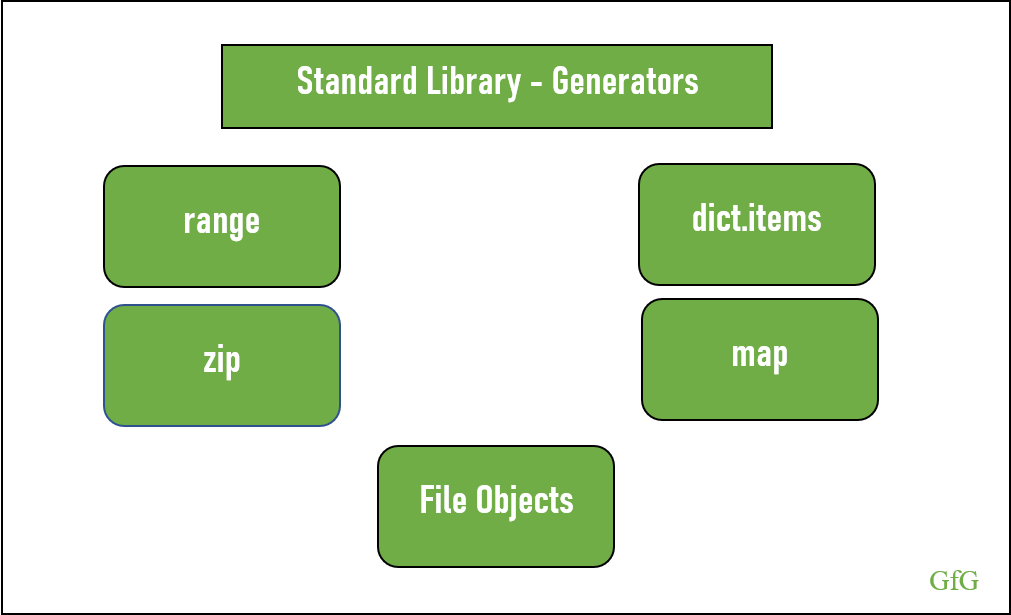 Range function returns an iterable range object and its iterator is a generator. It returns the sequential value which starts from the lower limit and continues till the upper limit is reached.

Dictionary class in python provides three iterable methods to iterate the dictionary. They are key, values and items and their iterators are generators.

zip is a built-in python function which takes multiple iterable object and iterates all at once. They yield the first element from each iterable, then the second and so on.

The map function takes function and iterables as parameters and computes the result of the function to each item of the iterable.

Even though the file object has a readline method to read the file line by line, it supports the generator pattern. One difference is that here the readline method catches the StopIteration exception and returns an empty string once the end of file is reached, which is different while using the next method.

While using next method, file object yields the entire line including the newline (\n) character 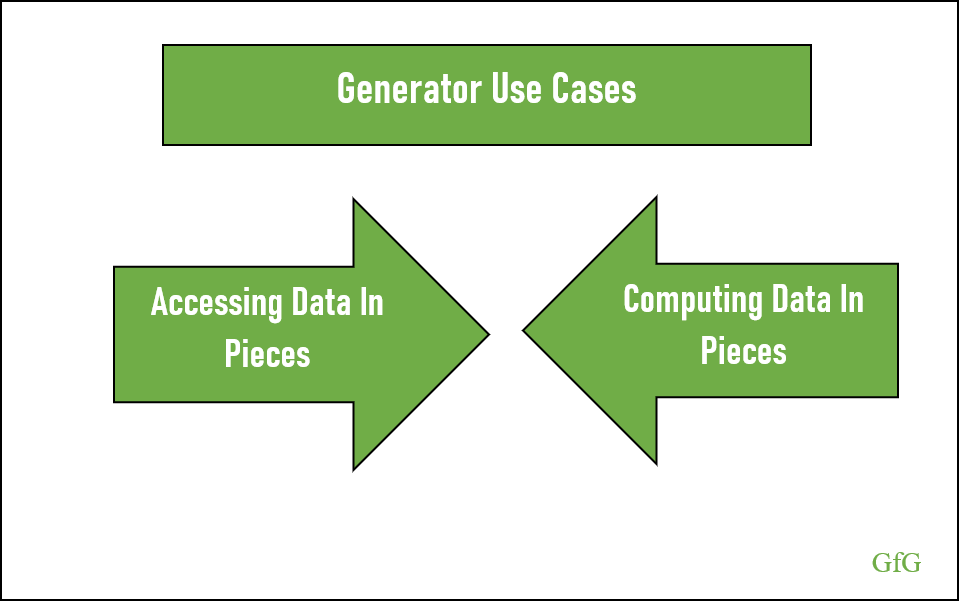 The Fundamental concept of Generator is determining the value on demand. Below we will discuss two use cases that derive from the above concept.

Why do we need to access data in pieces? The question is valid when the programmer has to deal with a large amount of data, say reading a file and so. In this case, making a copy of data and processing it is not a feasible solution. By using generators, programmers can access the data one at a time. When considering file operation, the user can access data line by line and in case of a dictionary, two-tuple at a time.
Hence Generator is an essential tool to deal with a large chunk of data that avoids unnecessary storage of the data and results in substantial memory savings.

Another reason to write a Generator is its ability to compute data on request. From the above Fibonacci function, one can understand that the generator produces the value on demand. This process avoids unnecessary computing and storing the values and hence can increase the performance and also results in substantial memory savings.
Another point to note is that the generator’s ability to compute an infinite number of data. 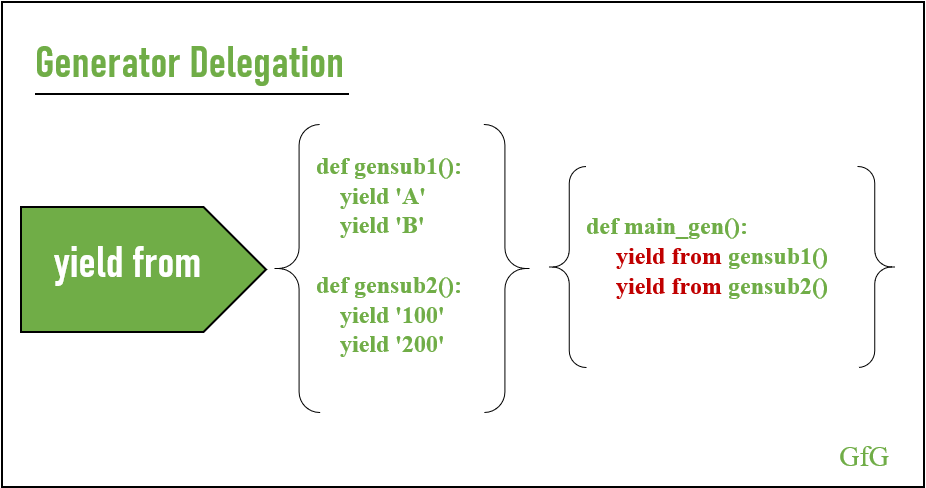 A generator is an essential tool for programmers who deal with large amounts of data. Its ability to compute and access data on-demand results in terms of both increase in performance and memory savings. And also, consider using generators when there is a need to represent an infinite sequence.