Union and Intersection of Sets

Sets are the well-defined collection of data/objects. The data/objects belong to the same group but each data differs from one another. For instance, if the word “application” has to be put in a Set, it will look something like, Set A= {a, p, l, i, c, t, o, n}, the letters which are repeated in the word, like “p”, “a”, “i” are only written once since they are the same elements repeated.

In Set theory, it is very common to see two or more two sets showing some or the other type of relation. Sets can have data common among them which is most likely to happen, sets sometimes do not have any data common, they are known as mutually independent sets. Let’s look at certain operations based on the relationship among sets,

Union of a Set

Union of a set is defined as the set containing all the elements present in set A OR set B. The word “OR” is used to represent the union of a set, which means if the data exists in either A Or B, it will be a part of the Union of the set. The symbol used to denote the Union of a Set is “∪”. The standard definition can be written as, if x ∈ A ∪ B, then x ∈ A or x ∈ B. The Venn diagram for A ∪ B is, 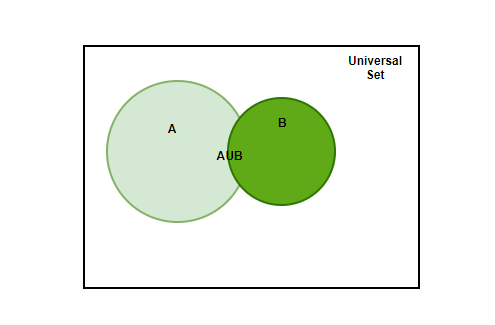 A good practical example for Union of two sets can be two friends inviting their other friends for the party, now there is a high possibility that there are friends who are common between them, now there is no point of inviting them twice, hence, the friends who are common are only invited once and the rest of the friends are also invited, this is what union of a set of friends will look like.

Intersection of a Set 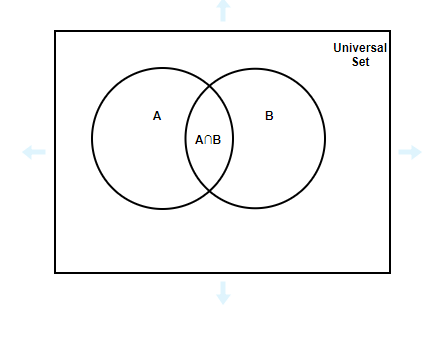 A good practical example of the intersection of two sets can be this, imagine two friends are throwing a party, and they decided to invite only those friends who are the mutual friends of them. They wrote down the names of their friends and then saw the friends which are common and invited only those, this can be called as the Intersection of the set of friends.

Complement of a Set

De Morgan’s law involves all the three operations, union, intersection, and compliment of the set. Suppose n number of sets are given as A1, A2, A3… An the complete complement of the union of all these sets is equal to the intersection of the complements of each one of them.

Question 1: Find the Union and Intersection of the sets,

Intersection of the set A and B

Question 2: Find the Intersection and Union of the sets given below,

Intersection of the sets

The intersection of the sets P, Q, and R is a Null set since no element is common among the three sets.

Question 3: Find the Complement, Union and intersection of the sets given,

Question 4: Prove the Associative property for the union of sets, the sets A, B, and C are given below,

Associative property for the union of sets,

Question 5: Prove De Morgan’s Law for the sets A and B given below when the Universal set is given as,

De Morgan’s law is given as,

Question 6: Prove Associative property of intersection of sets for the given sets,

The associative property for the intersection of the sets A and B is given as,