Understanding the t-distribution in R

A t-test is a statistical hypothesis test used to determine if there is a significant difference (differences are measured in means) between two groups and estimate the likelihood that this difference exists purely by chance (p-value). In a t-distribution, a test statistic called t-score or t-value is used to describe how far away an observation is from the mean. The t-score is used in t-tests, regression tests and to calculate confidence intervals.

Example: To find a value of t-distribution at x=1, having certain degrees of freedom, say Df = 25,

Code below shows a comparison of probability density functions having different degrees of freedom. It is observed as mentioned before, larger the sample size (degrees of freedom increasing), the closer the plot is to a normal distribution (dotted line in figure). 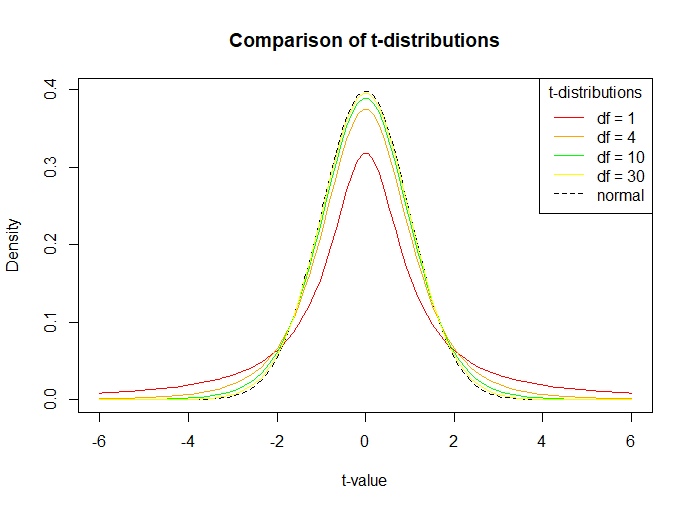 Essentially we found the one-sided p-value, P(t>2.1) as 2.7%. Now suppose we want to construct a two-sided 95% confidence interval. To do so, find the t-score or t-value for 95% confidence using the qt function or the quantile distribution.

So, a t-value of 2.14 will be used as the critical value for a confidence interval of 95%.

Previous
Normal Probability Plot in R using ggplot2
Next
R program to find prime and composite numbers in an interval
Related Articles
1. How to write a SQL query in R?
2. How to Add a vega axis specification to a ggvis plot?
3. Treemap with ggplot2 and treemapify in R
4. Read xlsb files in R
5. Web Scraping R Data From JSON
6. Sinaplot vs Violin plot - Why Sinaplot is better than Violinplot in R
7. Simulate Binomial or Bernoulli Trials in R
8. How to personalize easily ggplot2 graphs in R
9. Hover text and formatting in ggplot2 - Plotly
10. Graphical Parameters in R
Article Contributed By :