Understanding the Execution of Python Program

This article aims at providing a detailed insight into the execution of the Python program. Let’s consider the below example.

Suppose the above python program is saved as first.py. Here first is the name and .py is the extension. The execution of the Python program involves 2 Steps:

The program is converted into byte code. Byte code is a fixed set of instructions that represent arithmetic, comparison, memory operations, etc. It can run on any operating system and hardware. The byte code instructions are created in the .pyc file. The .pyc file is not explicitly created as Python handles it internally but it can be viewed with the following command:

-m and py_compile represent module and module name respectively. This module is responsible to generate .pyc file. The compiler creates a directory named  __pycache__ where it stores the first.cpython-38.pyc file.

However, the interpreter inside the PVM translates the program line by line thereby consuming a lot of time. To overcome this, a compiler known as Just In Time (JIT) is added to PVM. JIT compiler improves the execution speed of the Python program. This compiler is not used in all Python environments like CPython which is standard Python software.

To execute the first.cpython-38.pyc we can use the following command:

To view the byte code of the file – first.py we can type the following command as : 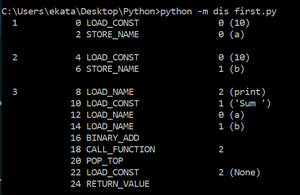 The dis command is known as “disassembler” that displays the byte code in an understandable format. The code represents 5 columns: