TF-IDF stands for Term Frequency Inverse Document Frequency of records. It can be defined as the calculation of how relevant a word in a series or corpus is to a text. The meaning increases proportionally to the number of times in the text a word appears but is compensated by the word frequency in the corpus (data-set).

The weight of a term that occurs in a document is simply proportional to the term frequency.

The more common word is supposed to be considered less significant, but the element (most definite integers) seems too harsh. We then take the logarithm (with base 2) of the inverse frequency of the paper. So the if of the term t becomes:

In python tf-idf values can be computed using TfidfVectorizer() method in sklearn module. 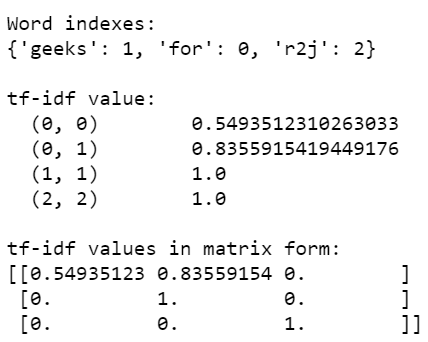 The result variable consists of unique words as well as the tf-if values. It can be elaborated using the below image:

From the above image the below table can be generated:

Below are some examples which depict how to compute tf-idf values of words from a corpus:

Example 1: Below is the complete program based on the above approach: 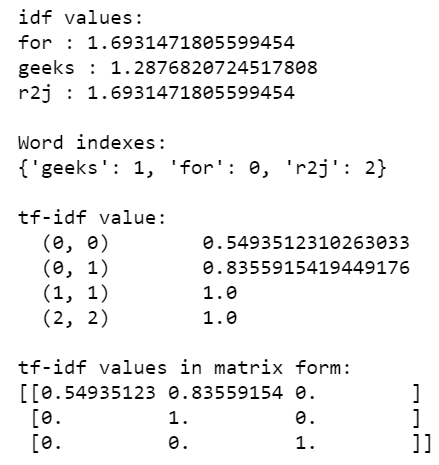 Example 2: Here, tf-idf values are computed from a corpus having unique values.

Example 3: In this program, tf-idf values are computed from a corpus having similar documents. 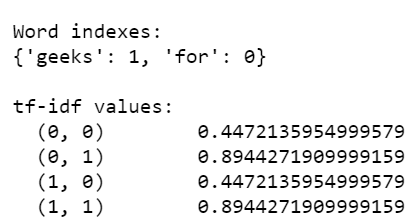 Example 4: Below is the program in which we try to calculate tf-idf value of a single word geeks is repeated multiple times in multiple documents. 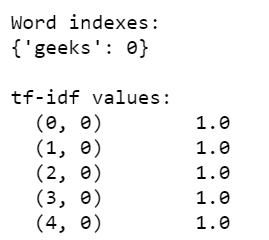