Multiprocessing is the situation in which more than one processor is working in unison. So, they must be well configured so as not to generate any type of problem. There are typically 3 types of configurations: Master / Slave Configuration, Loosely Coupled Configuration, and Symmetric Configuration. These are explained in are following below.

1. Master / Slave Configuration: The master/slave configuration is a single processor system where extra slave processors are working, managed by

the primary master processor. It is an asymmetrical system.

The work of the master processor is to manage the entire system consisting of files, devices, main memory and the slave processors. It maintains the status of all the processes, schedules the work for the slave processor and executes all control programs. It is also responsible for storage management. This type of configuration is suitable for computing environments where the processing time needs to be divided between front end and back end processor. The advantage of this configuration is that it is simple to understand. The disadvantages include:

2. Loosely Coupled Configuration: In this type of configuration, there are several complete computer systems with their own memory, I/O devices, CPU and operating system. 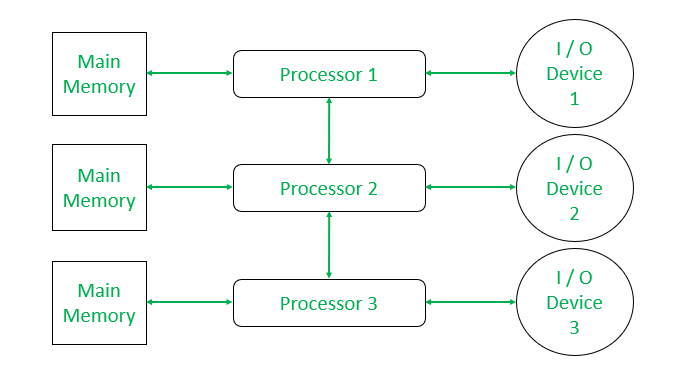 Each processor controls it’s own resources (I/O devices, memory, etc.) and their own commands and management tables. Each processor can also communicate and cooperate with each other. When a job is given, it is assigned to one processor and that processor works on that task till it’s completion. So, there must be global tables to indicate which processor has been given a specific task. Also for the system to be well balanced, job scheduling must be done on various parameters and according to various policies. The advantage of this configuration is that it isn’t prone to catastrophic failure. If a processor fails, other can continue their work independently. The disadvantage of this configuration is that it is difficult to detect if a processor has failed. 3. Symmetric Configuration: In symmetric configuration processor scheduling is decentralized. A single copy of the OS and a table listing each process and it’s status is stored in memory common and accessible to all the processors, so that each processor can use the algorithms to decide which job to run next.