Types of Trendlines in Excel

A line that bounds a particular chart and shows the behavior as it propagates is known as a trend line. It is generally used for analytics purposes to get a close approximate idea from the chart. The chart can be of any type like Bar Chart, Scattered Chart, Line Chart, etc.

In this article, we are going to see different types of Trendlines in Excel using some practical real-life examples : 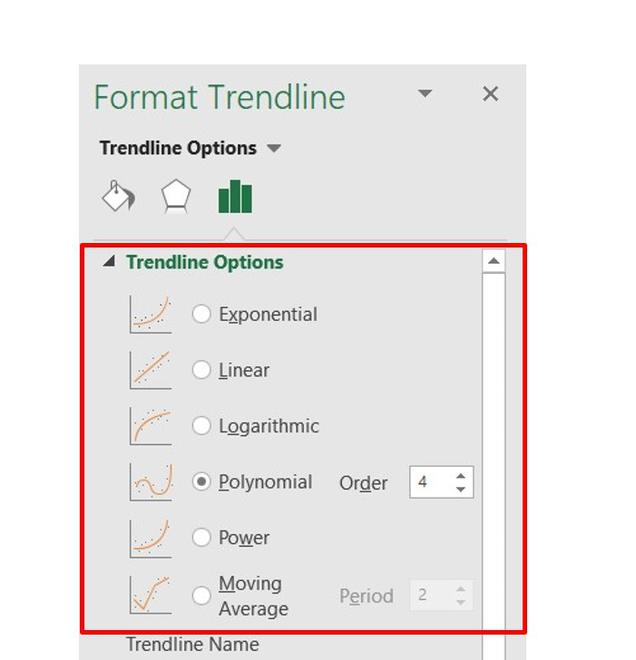 Example: The below linear trendline shows the performance of a batsman in a T20 match. The linear trendline is rising with the number of matches played. This shows the player performed well gradually in all the matches and the runs scored kept on increasing.

2. Polynomial Trendline: Polynomial trendline is used when the dataset is changing values rapidly i.e. sometimes increasing or decreasing more than once. It is of the type :

The degree of a polynomial is the largest power of x. In the trendline the number of bends is dependent on the degree number. By default, the order will be 2 as we can see in “Order”. The number of bends or hills will increase as you increase the Order value.

Example : The below polynomial trendline shows the performance of a batsman in eight contiguous matches. We can see a rise in the number of runs scored and then reached a peak value and again fallen. So for such types of data sets the polynomial trendline is mostly used. 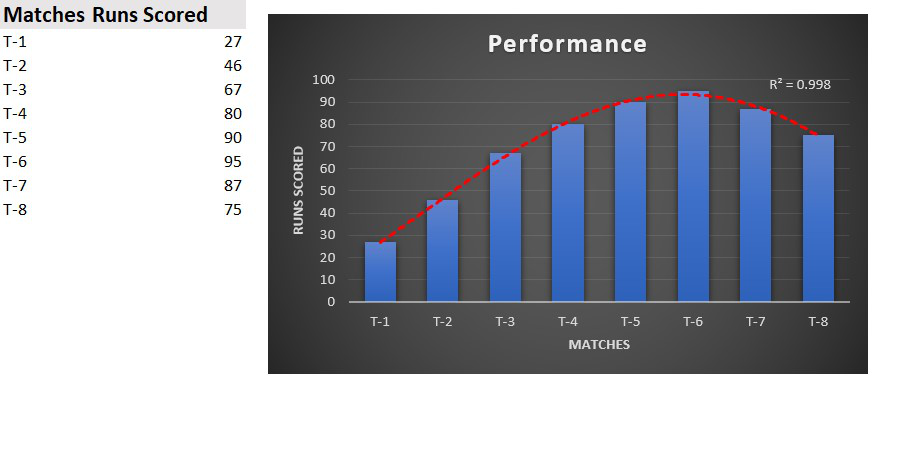 3. Exponential Trendline: It is mostly used when there is a rise or fall in the dataset exponentially. It is of the type :

Example : Consider a survey which consists of the number of people suffering from a deadly disease. The number of positive cases per month from January to July is the data set here. We can infer from the below chart that the number of cases are exponentially declining till July. 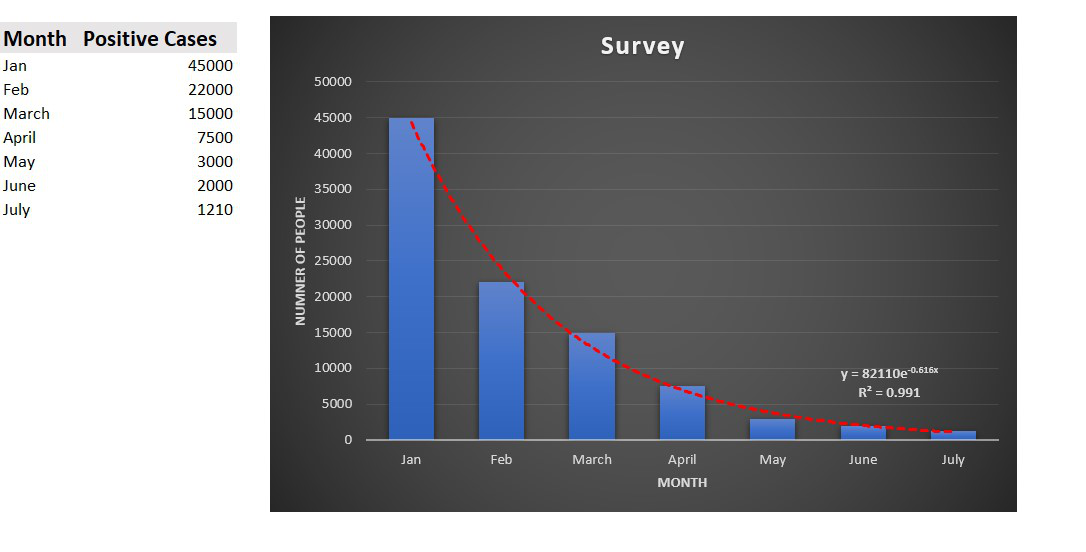 4. Logarithmic Trendline: The best-fit line is mostly used for datasets that either increase or decrease and then maintain a constant level. It is basically the inverse of the exponential trendline. It is of the type :

Example: Consider a survey about the number of people taking vaccines per month. We can see that it is growing and then level off in June and July. We can infer from the below chart that by June maximum people have started to take vaccines.

5. Power Trendline: It is mostly used for datasets that increase at a particular rate, It is more symmetrical and is somewhat similar to the exponential type of curve. It is of the type :

Example: Consider the runs scored by a batsman in ten consecutive test matches. We can infer from the below chart that the performance of the player has increased gradually as he played more matches. 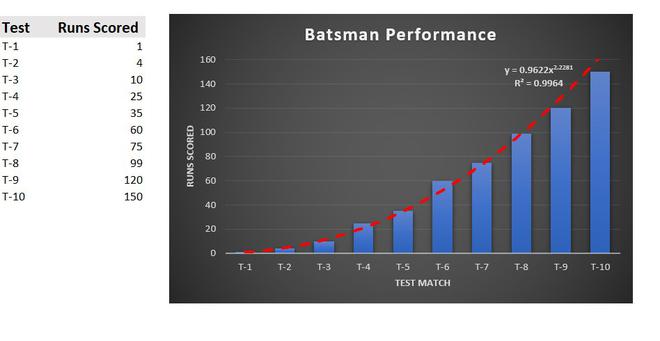 6. Moving Average Trendline : When there are a lot of oscillations i.e. rapid up and down in the values of the datasets, the moving average trendline can be used to make a smooth and effective line around the chart to see the growth and fall of the data. In Excel by default, the Period of the trendline is set to 2. As we increase the value of the Period the line becomes more effective and surrounds the chart. It gets a smooth bend and curves on increasing the Period value.

For example: Consider the performance of a batsman in ten consecutive IPL matches. We can see the performance of the player is not constant and there is rise or fall in the runs scored and also in one of the matches he was out for a duck. 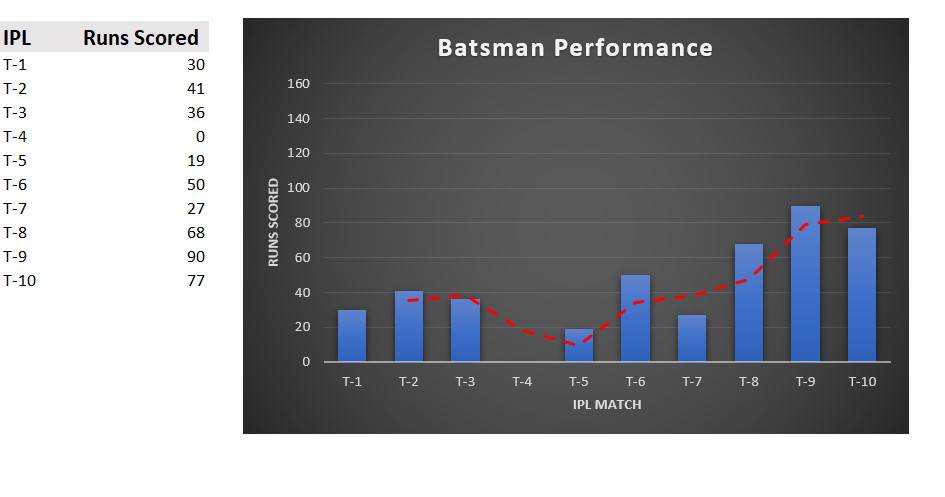 My Personal Notes arrow_drop_up
Previous
Increasing and Decreasing Intervals
Next
SQL - SELECT SUM
Recommended Articles
Page :
Excel Chart with Two Trendlines
24, May 21
Stacked Column Chart with Stacked Trendlines in Excel
29, May 21
Editing Excel Macros in Excel
29, May 21
Difference between fundamental data types and derived data types
04, Sep 18
Scenario Manager in Excel
12, May 21
Introduction to MS-Excel
29, May 21
How to Find Duplicates in Excel?
11, May 21
Combination Charts in Excel
18, May 21
Actual vs Target Chart in Excel
20, May 21
How to create a list of files, folders, and subfolders in Excel using Python ?
28, May 21
Loading Excel spreadsheet as pandas DataFrame
08, Jan 19
Pivot Table Slicers in Excel
11, Apr 21
Perl | Creating Excel Files
12, Mar 19
How to convert Excel column to vector in R ?
14, Apr 21
Perl | Reading Excel Files
10, Jul 19
How to convert excel content into DataFrame in R ?
14, Apr 21
Convert CSV to Excel using Pandas in Python
29, Jun 20
How to Automatically Insert Date and Timestamp in Excel?
24, May 21
Sparklines in Excel
03, Jun 21
Named Range in Excel
24, May 21
Working with Excel Files in R Programming
27, May 20
How to Add Trendline to Excel?
11, Apr 21
Mixed Reference in Excel
24, May 21
Step Chart in Excel
12, May 21
Article Contributed By :