Chemical bonding is the process of uniting two or more atoms by the redistribution of electrons, resulting in each atom achieving a stable electronic state.

To achieve security, each of the atoms completes their duplet or octet by obtaining the nearest tolerable gas electronic arrangement. It’s usually performed by the formation of composite connections between particles.

In three ways, a particle can form chemical bonds:

An electrical force of attraction known as the Ionic Bond emerges when electrons are completely transferred from the positively charged cation to the negatively charged anion.

Formation of an Ionic Bond

An ionic or electrovalent bond is a chemical bond produced between two atoms by the transfer of one or more electrons from an electropositive or metallic element to an electronegative or non-metallic element. The electrical arrangement of the sodium atom is 2,8,1, as we know. In its outermost shell, it just possesses one electron. It gets the inert gas electrical structure of Neon by donating this electron (2,8).

The electrical arrangement of the chlorine atom, on the other hand, is 2,8,7. It simply needs one more electron to complete its octet and achieve the inert configuration of Argon (2,8,8).

To remove an electron from its outermost shell and produce the positively charged sodium ion Na+, the sodium atom requires an amount of energy equal to its ionisation energy of roughly 496kJ/mol. This is referred to as an endergonic process since it consumes energy. The chlorine atom, on the other hand, which is missing one electron, takes an electron and releases energy equivalent to its electron affinity, i.e. To produce a chloride ion, 349kJ/mol is required. The Exorgenic process gets its name from the fact t

energy is released during the process.

Electrovalency– The amount of atoms lost or acquired by one atom is referred to as electrovalency. In NaCl, the electrovalency of sodium and chlorine is one. As a result, they are monovalent. Calcium provides two valence electrons to generate calcium ions (2,8,8), and oxygen obtains two electrons to form oxide ions in the creation of Calcium oxide (CaO) (2,8). Calcium and oxygen have the same electrovalency, i.e. they are divalent. The oppositely charged ions are formed once the electrons are transferred. The development of an ionic link between sodium and fluorine atoms is seen here.

Conditions for the formation of Ionic Bond

Atoms with one, two, or three valence electrons in groups I(A), II(A), or 13(A) of the modern periodic table prefer to lose electrons and form positively charged species known as cations. Atoms with 5,6, or 7 valence electrons in groups 15,16, and 17 of the current periodic table, on the other hand, are more likely to take electrons and form negatively charged species known as anions. Thus, potassium, which is in group I(A) of the current periodic table and has one electron in its outermost shell, is suitable for creating an ionic connection with chlorine, which is in group 17 and has seven electrons in its outermost shell. As a result, potassium chloride is classified as an ionic substance.

The energy generated when an electron is introduced to a neutral isolated gaseous atom is defined as electron affinity. Consider a fluorine atom, which contains seven electrons in its outermost orbit. It receives one electron without hesitation to complete its octet structure. Per mol, this reaction releases roughly 328kJ of energy. The resulting fluoride ion has lower energy than the fluorine atom. We all know that reduced energy equals more stability. As a result, the fluoride ion is more stable than fluorine. As a result, a non-greater metal’s electron affinity favours the creation of an anion, resulting in a stable ionic combination.

The lattice energy of the ionic compounds is a key feature that influences their stability. The energy generated when one gram mole of a crystal is created from its gaseous ions is known as lattice energy. Electrostatic forces of attraction hold the component ions of an ionic compound together in any crystal.

The capacity of an atom to pull electrons towards itself during bond formation is measured by its electronegativity. When the electronegativity values of the atoms differ by 1.7 or more, the creation of an ionic connection is more likely. Consider the sodium chloride (NaCl) and hydrogen chloride (HCl) molecules.

In sodium chloride, this aids in the e

lishment of a stable ionic connection.

The link between hydrogen and chlorine is covalent due to the lesser electronegativity difference.

Writing Formula of an Ionic Compound

The following two requirements must be met in order to derive the chemical formulae of ionic compounds:

The number of electrons provided or received is represented by the charges on the anion and cation. In ionic bonding, the compound’s net charge must be zero.

Properties of an Ionic Bond

When an external force is applied, the ions’ alignment changes in such a manner that similar charges are brought closer together. The ions migrate apart as a result of the high electrostatic repulsion. The form of the crystals fractures when the ions smash into bits.

The covalent bond can be categorised into the following categories based on the number of shared electron pairs:

When just one pair of electrons is shared between the two participating atoms, a single bond is established. One dash is used to symbolize it (-). Although it has a lower density and is weaker than double and triple bonds, this type of covalent bond is the most stable.

drogen and chlorine in this situation.

When two pairs of electrons are shared between the two participating atoms, a double bond is established. Two dashes (=) are used to indicate it. Double covalent bonds are substantially more powerful than single covalent bonds, but they are also less stable.

When the two participating atoms share three pairs of electrons, a triple bond is established. The least stable forms of covalent bonds are triple covalent bonds, which are indicated by three dashes (≡). 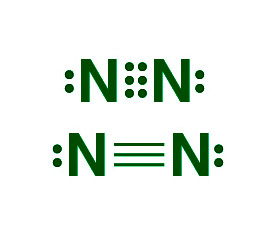 Example, An uneven electric potential causes molecules to form hydrogen bonds. The hydrogen atom interacts with the electronegative fluorine, hydrogen, or oxygen in this situation.

Example, Gas molecules such as hydrogen and

Polarization of Covalent Bonds: The electron cloud is always closer to the more electronegative of the two atoms participating in the sigma bond in sigma bonds between two distinct atoms. As a result, the bond develops a permanent dipole, and the covalent bond is said to be polarised.

Difference between Covalent and Ionic Bond

Question 1: What is Chemical Bond?

Chemical bonding is the process of redistributing electrons between two or more atoms so that each atom achieves a stable electronic state.

Question 2: What are the types of chemical bonds

Question 3: Which chemical bonds are the strongest?

The covalent link is the most powerful chemical bond. Due to the mutual sharing of electrons, they developed between two atoms. Water is a classic example of a covalent bond because both hydrogen and oxygen atoms exchange electrons.

Question 4: What causes a diamond’s melting point to be so high?

Question 5: What are polar covalent bonds?

When electrons are shared unequally, this type of covalent bond forms because the electronegativity of the joining atoms vary. For more electronegative atoms, the pull for electrons will be stronger. The electronegative difference between the atoms is more than zero but less than 2.0. As a result, the shared pair of electrons of that atom will be closer together.