Let us learn what exactly Boltzmann machines are, how they work and also implement a recommender system which recommends whether the user likes a movie or not based on the previous movies watched. 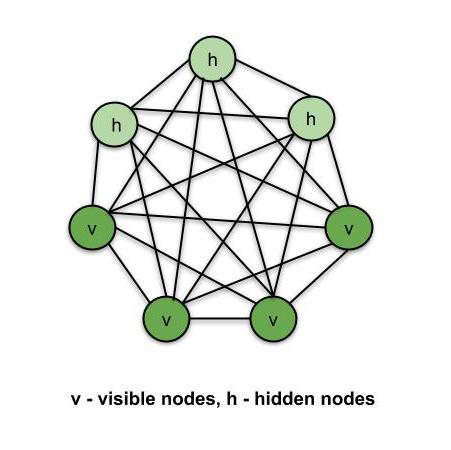 In a full Boltzmann machine, each node is connected to every other node and hence the connections grow exponentially. This is the reason we use RBMs. The restrictions in the node connections in RBMs are as follows –

Suppose that we are using our RBM for building a recommender system that works on six (6) movies. RBM learns how to allocate the hidden nodes to certain features. By the process of Contrastive Divergence, we make the RBM close to our set of movies that is our case or scenario. RBM identifies which features are important by the training process. The training data is either 0 or 1 or missing data based on whether a user liked that movie (1), disliked that movie (0) or did not watch the movie (missing data). RBM automatically identifies important features.

The Gradient Formula gives the gradient of the log probability of the certain state of the system with respect to the weights of the system. It is given as follows –

The above equations tell us – how the change in weights of the system will change the log probability of the system to be a particular state. The system tries to end up in the lowest possible energy state (most stable). Instead of continuing the adjusting of weights process until the current input matches the previous one, we can also consider the first few pauses only. It is sufficient to understand how to adjust our curve so as to get the lowest energy state. Therefore, we adjust the weights, redesign the system and energy curve such that we get the lowest energy for the current position. This is known as the Hinton’s shortcut.

Consider – Mary watches four movies out of the six available movies and rates four of them. Say, she watched m1, m3, m4 and m5 and likes m3, m5 (rated 1) and dislikes the other two, that is m1, m4 (rated 0) whereas the other two movies – m2, m6 are unrated. Now, using our RBM, we will recommend one of these movies for her to watch next. Say –

We have the following observations –

Therefore, based on the observations and the details of m2, m6; our RBM recommends m6 to Mary (‘Drama’, ‘Dicaprio’ and ‘Oscar’ matches both Mary’s interests and m6). This is how an RBM works and hence is used in recommender systems.

Suppose we stack several RBMs on top of each other so that the first RBM outputs are the input to the second RBM and so on. Such networks are known as Deep Belief Networks. The connections within each layer are undirected (since each layer is an RBM). Simultaneously, those in between the layers are directed (except the top two layers – the connection between the top two layers is undirected). There are two ways to train the DBNs-

Therefore, we stack the RBMs, train them, and once we have the parameters trained, we make sure that the connections between the layers only work downwards (except for the top two layers).