Distributed Database Management System (DDBMS) :
A distributed database is essentially a database that’s not limited to at least one system, it covers different sites, i.e, on multiple computers or over a network of computers. A distributed database system is found on various sites that don’t share physical components. This may be required when a specific database must be accessed by various users globally. It must be managed such for the users. It’s like one single database.

What is transparency?
Transparency in DDBMS refers to the transparent distribution of information to the user from the system. It helps in hiding the information that is to be implemented by the user. Let’s say, for example, in a normal DBMS, data independence is a form of transparency that helps in hiding changes in the definition & organization of the data from the user. But, they all have the same overall target. That means to make use of the distributed database the same as a centralized database.

In Distributed Database Management System, there are four types of transparencies, which are as follows – 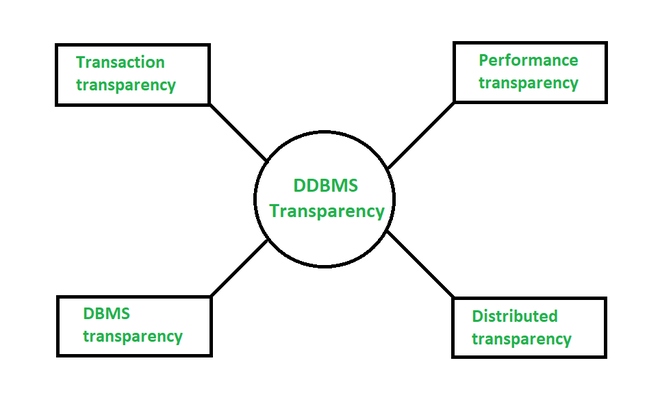 My Personal Notes arrow_drop_up
Previous
Types of Locks in Concurrency Control
Next
DOM-based Cross-Site Scripting Attack in Depth
Recommended Articles
Page :
Querying Data from a Database using fetchone() and fetchall()
17, Jan 22
Strategies For Migrating From SQL to NoSQL Database
04, Jan 22
Introduction to Graph Database on NoSQL
25, Dec 21
Challenges of NoSQL
25, Dec 21
What is Microsoft Dataverse?
24, Dec 21
Types of Big Data
26, Nov 21
7 Best Books for Database Administrators and Developers
17, Nov 21
Components and Analysis of Star Schema Design
01, Nov 21
How to Configure RAID?
01, Nov 21
What is NULL ? Give an example to illustrate testing for NULL in SQL. What is dangling tuple problem ?
01, Nov 21
What is Data Normalization and Why Is It Important?
04, Oct 21
What is SQL?
04, Oct 21
Article Contributed By :