The direct current (DC) travels in only one direction, but the alternating current (AC) is an electric current that switches direction on occasion and changes its amplitude continually over time. Alternating current is the type of electricity used by companies and consumers when they plug in kitchen appliances, TVs, fans, and electric lamps to a wall socket.

A flashlight’s battery cell, on the other hand, is a common DC power source. The abbreviations AC and DC are often used to signify alternating and direct current and voltage, respectively. The most common waveform of alternating current in most electric power circuits is a sine wave, whose positive half-period corresponds to positive current direction and vice versa. In specific applications, such as guitar amplifiers, different waveforms, such as triangle waves or square waves, are used. Audio and radio signals delivered over electrical lines are other examples of alternating current. In various types of alternating current, information such as sound (audio) or pictures (video) is occasionally communicated by modulation of an AC carrier signal. These currents normally have a greater frequency than power transmission currents.

A transformer is an electrical device that uses electromagnetic induction and mutual induction to transmit electrical energy from one circuit to another. It’s most typically used to raise (‘step up’) or lower (‘step down’) voltage levels between circuits without changing the AC frequency between them.

There are primarily two types of transformers based on the operating voltage. The following are some of them: 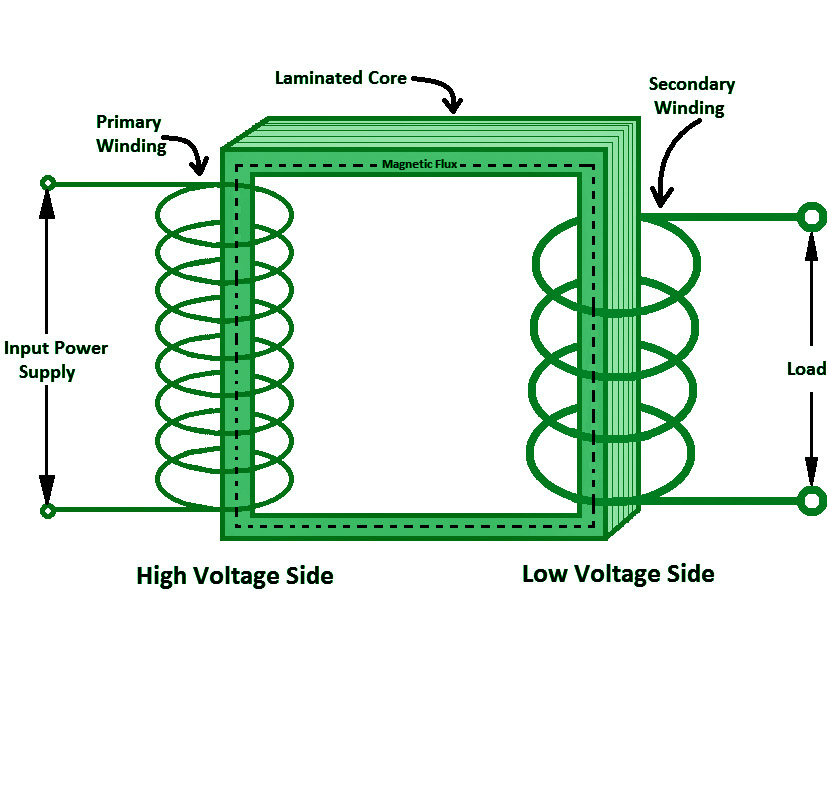 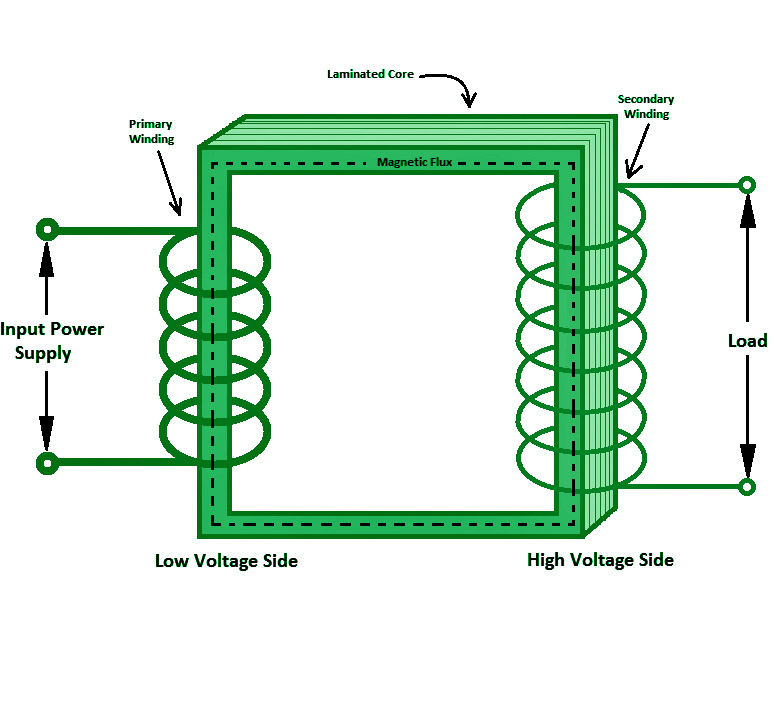 Working Principle of a Transformer

Faraday’s Law of Electromagnetic Induction governs the operation of transformers. “The amplitude of induced voltage is exactly proportional to the rate of change of magnetic flux through the coil,” the paper states. A changing current in one of the transformer’s coils (primary coil) causes a changing magnetic field, which causes a changing electromotive force (e.m.f) or “voltage” in a second coil (secondary coil). The magnetic field transfers power between the two coils; there is no metallic connection between the two circuits. 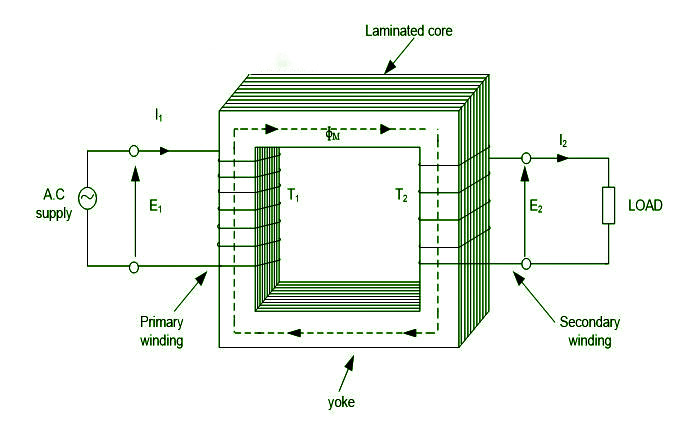 A transformer, as shown in the diagram above, contains a magnetic core over which two sets of windings, referred to as primary and secondary, are appropriately positioned. When one of the windings is linked to an AC supply, it induces an emf on the other winding that is proportional to the number of turns in the main and secondary coils.

The different transformer parts are listed below.

There are no losses in a perfect transformer. Magnetic flux leakage, ohmic resistance in the windings, and iron loss in the core are all absent. 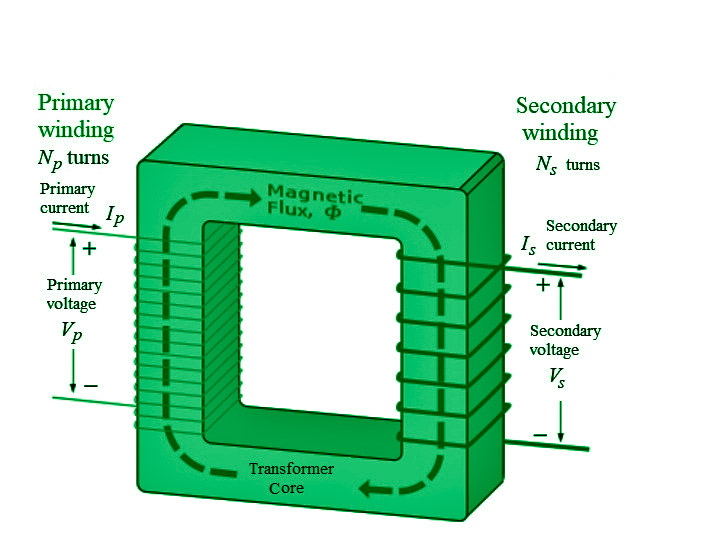 When an AC voltage is given to the transformer’s main coil, the current generated creates an alternating magnetic flux that connects the secondary coil and generates an emf. The number of turns in the secondary coil determines the value of this emf. Consider an ideal (lossless) transformer with zero primary coil resistance (no voltage drop across coil) and all flux in the core connecting both primary and secondary windings. When the voltage Vp is delivered to the primary coil, let be the flux linkage in each turn in the core at time t owing to current in the primary coil.

The induced emf or voltage (εs) in the secondary with Ns turns is then calculated.

In addition, the alternating flux generates a reverse emf in the main. This is it.

And for an ideal transformer, εp=Vp

By approximation, if the secondary is an open circuit or the current drawn from it is modest,  εs=Vs .

The voltage across the secondary coil is Vs . As a result, Equations (1) and (2) may be written as

The following three assumptions are used to get the aforementioned relationship:

The power input and output will be equal if the transformer is perfect or 100 percent efficient (no energy losses).

A Transformer’s efficiency may be expressed as follows:

The following are some of the most common uses for transformers:

Question 1: What is a Transformer?

A transformer is an electrical device that transmits electrical energy from one circuit to another using electromagnetic induction and mutual induction. It’s most commonly utilised to increase (‘step up’) or decrease (‘step down’) voltage levels between circuits while keeping the AC frequency constant.

Question 2: What are the applications of transformer?

The applications of transformers are:

Question 3:  The number of turns in the secondary coil of a 22KVA, 2200V/220V single-phase transformer is 50, then find the number of primary turns. Neglect all kinds of losses in the transformer.

The value of the turns ratio is

The value of the primary turns can be determined as:-

Question 4: The number of turns in the secondary coil of a 23KVA, 2200V/220V single-phase transformer is 60, then find the primary full load current

The value of the primary full load current is,

Question  5:  The number of turns in the secondary coil of a 25KVA, 2200V/220V single-phase transformer is 70, then find the secondary full load current

The value of the Secondary full load current is

Question 6: What is step up transformer?