Scala Linearization is a deterministic process which comes into play when an object of a class is created which is defined using inheritance of different traits and classes. linearization helps to resolve the diamond problem which occurs when a class or trait inherits a same property from 2 different concrete classes or traits.

Here Any is the superclass of all classes, also called the top class. It defines certain universal methods such as equals, hashCode, and toString. AnyRef represents reference classes. All non-value types are defined as reference types. AnyRef corresponds to java.lang.object . Every Scala trait and class implicitly extend these Scala objects at the end of linearization hierarchy. 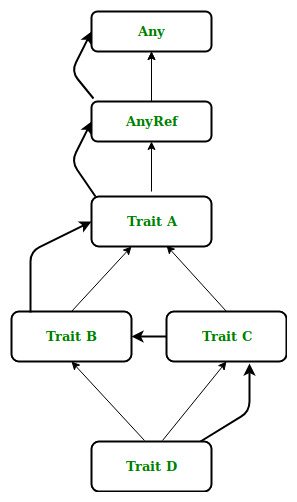 Following rules are followed for the determining the linearization: