Torque on an Electric Dipole in Uniform Electric Field

Science is a strange subject that never ceases to amaze you as new subjects are presented. We’re all aware that charge occurs everywhere around us and that its existence causes a variety of natural events. Furthermore, positive and negative charges exist in many forms, displaying various characteristics in the presence of a stimulating field.

Torque is the measurement of the force that causes an item to rotate around an axis.

Torque is a vector quantity whose direction is determined by the force acting on the axis. The torque vector’s magnitude is determined as follows:

An electric dipole is a pair of equal and opposite electric charges separated by a distance d.

Torque on an electric dipole

Because the net force is zero, it can be observed that the dipole is in transitional equilibrium. What is, however, the rotational equilibrium? In this scenario, the dipole may remain fixed but rotates with a certain angular velocity. This fact has been demonstrated experimentally, and it indicates that both electrostatic forces (qE) behave as clockwise torque. As a result, when the dipole is put in a uniform external electric field, it rotates. Always keep in mind that torque always works in pairs. Furthermore, its magnitude is the resulting product of force and its arm. The arm may be thought of as the distance between the point where force is applied and the point where rotation occurs for the dipole.

Consider a dipole with charges +q and –q that form a dipole because they are separated by a distance of d. Place it in a homogeneous electric field of strength E, with the dipole’s axis forming an angle θ with the electric field. 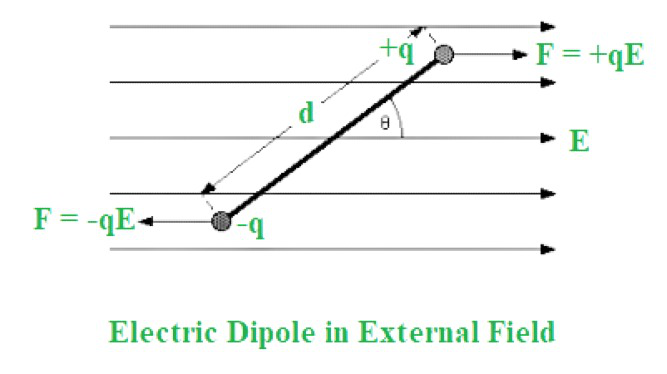 The components of the force perpendicular to the dipole, F = ± q E sinθ

Since these components are equal and are separated by a distance d, the torque on the dipole is:

The negative sign shows that torque is in the clockwise direction.

Problem 1: An electric dipole is placed at an angle of 30° with an electric field of intensity 3 × 104 N ⁄ C. It experiences a torque of 5 Nm. Calculate the charge on the dipole if the dipole length is 5 cm.

The torque on a dipole in electric field is given by:

Hence, the torque on a dipole in an electric field is 6.7 mC.

Problem 2: Two tiny electrical dipoles AB and CD, each with a dipole moment of p, are maintained at an angle of 120°. What is the dipole moment as a result? What would the amount and direction of torque operating on this system be if E is directed in the +x direction?

The resultant vector makes 30° angle with x-axis, so the torque experienced by the effective dipole,

It acts along the z-direction.

Hence, the effective dipole moment is p; the torque operating on the system is (1 ⁄ 2) p E along the +z-direction.

Problem 3: An electric dipole of magnitude 0.5 C m is placed parallel to an electric field of intensity 30 N⁄C. Calculate the torque acting on the dipole.

Hence, the torque acting on the dipole is 0.

Problem 4: Why do a dipole experience force and torque both when placed in a non-uniform electric field?

Each charge of a dipole receives a force when it is put in an uniform electric field and the dipole vector direction is not parallel to the field direction. The magnitude of both forces is identical, yet they are moving in opposing directions. A pair is formed by these equal and opposing parallel forces. This pair applies a torque on the dipole, causing it to spin and align in the field direction. The force, however, is always zero in uniform field.

There will be a torque when a dipole is put in a non-uniform field, as stated above. The forces acting on the charges are not the same after the dipole is aligned to the field direction. As a result, the dipole will be subjected to a net force in the direction of increasing field. As a result, the electric dipole experiences both torque and force in a non-uniform field.

Problem 5: At what angle does the dipole in an external electric field experience the maximum torque on it?