The term hacking has been around for a long time, the first recorded instance of hacking actually dates back to the early 1960s in Massachusetts Institute of Technology where both the terms hacking and hacker who were coined since then hacking has actually evolved into a broadly followed discipline for the computing community. Nowadays, ethical hacking is the process of detecting the vulnerabilities in the system by getting unauthorized access into the particular system to perform activities that can range from deleting filers to stealing some sensitive information. 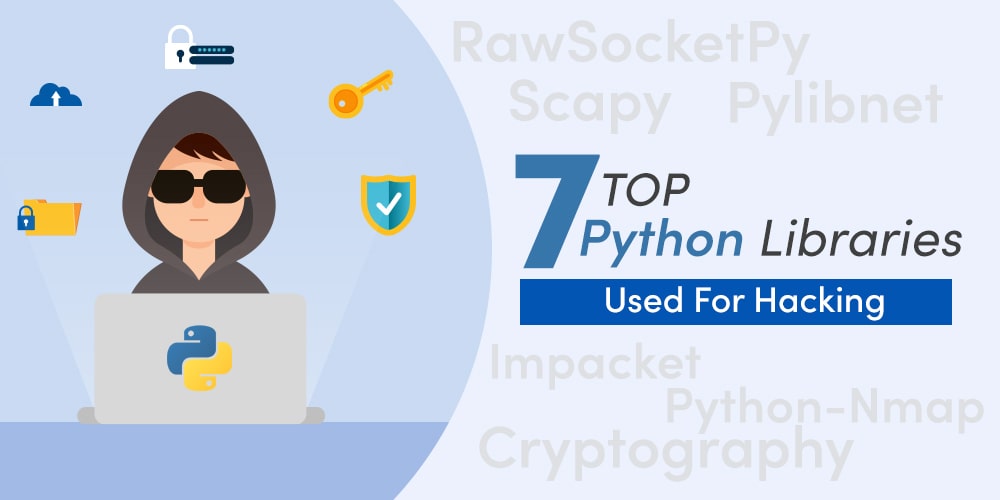 Why Python When It Comes to Ethical Hacking?

Python is known as one of the fastest-growing programming languages and is versatile and widely used by security experts and hackers for ethical hacking. In this piece, you will read about 7 python libraries effective for ethical hacking. Being an open-source language, Python allows programmers to create multiple sets of pre-combined codes and forming libraries that make the python script more comprehensive and secure.

Apart from the application of python to web development, data science, and machine learning, it is successfully used by hackers and cybersecurity departments for identifying a break in computer networks and compromising the security protocols. Python programming is also used by ethical hackers to develop effective hacking tools and techniques that could find malware and vulnerabilities that lower down the efficiency of systems with the use of python scripts.

Python libraries reduce the load of developing codes from scratch. With already formulated code libraries, ethical hackers can use them to make their tasks easier. Ethical hacking happens where there are potential threats to computer networks and as a result, the security gets compromised with unidentified or illegal access to the systems.

Python is vastly popular because of its super-powerful yet easy-to-use libraries that are easily available to developers. Despite the fact that Python comes with minimal syntax and awesome readability, but nothing beats the fact that developer’s lives get really simple with these libraries which are available in all sorts of domains, for example, artificial intelligence has PI touch intensive loop while data science has pandas, NumPy, matplotlib, and so on. Here are some of the top 7 Python libraries used for hacking and each one has its unique identification and function.

The requests library helps one to allow HTTP requests to be more user-friendly. It returns responsive objects including data of status, encoding, and content. It is a module that can be used to send all kinds of HTTP requests it is very easy to use and has features like passing parameters in the URL and passing custom headers as well. It is a human-friendly HTTP library as it also suggests on the official documentation page as well and it is one of the most downloaded Python libraries with more than 400,000 downloads every day. Python requests are so popular because developers don’t have to manually add the queries to the URLs and form encode post data and that is reason enough to use Python requests.

Cryptography is a library that helps with encryption as well as the description of sets of data. The library includes primitives supported by Python 3.3+, Python 2.6-2.7. Cryptography involves the amalgamation of two layers that is, namely safe cryptographic recipes that require minimum configuration choices. While another one is low-level cryptography which is most dangerous and can be used incorrectly. This python library helps to secure information with the help of effectively developed codes. Cryptography includes the generation of random numbers, digital signatures, hashing, stream ciphers, and hashing.

Nmap is a typical network scanner tool using IP packets for the identification of devices on a network and information regarding operating systems. With the use of the Nmap port scanner, this library helps the system administrators automate the task for scanning reports supporting the Nmap scripts outputs. Nmap helps to identify and discover hosts on networks and detects the version number, application name functioning on any remote devices.

The library consists of Python scripts that aids with working on network protocols, it ensures low-level programming access to other packets along with the implementation of the protocols. Packets can be made out of raw data, and the API makes deep hierarchies protocols work efficiently. Impacket’s goal is to make tasks easier for programmers so that they can work under a framework while abiding by some custom protocols.

The tool to manipulate network packets, helping with discovering networks, probing, tracing, routing, and scanning. Scapy includes diverse functionalities apart from packet sniffing and can be customized as peruse. It can be run on Linux, Mac OS, and windows. It presents decoded packets with the interpretation depending on the user. Scapy works to bring semblance between high leveled protocols and low-level networks programming.

A layer 2 python library that encourages communication with MAC addresses. One can create custom-made WiFi communication using rawsocketpy. A non-simultaneous server with an uptight capability with no encryption needs an MTU of 1500. Rawsocketpy does not involve transmission control protocol or user datagram protocol.

A libnet packet injection library ensures functionality for sending packets, presentation of libcap traces along with having a python API for libnet packets. These are some of the python libraries holding an efficacy under ethical hacking. Python language is used by tech companies because of its versatility and secure algorithms. Python gained much popularity in the last few decades. It has been used by a lot of developers, hackers of big companies because of its easy-to-understand and general-purpose syntax that can be applied to a large number of programming domains. There are countless python libraries available on the web, but the ones listed above are best suited for ethical hacking.