Now more than maybe ever, businesses, corporations, students, developers alike are aware of the omnipresence of IT and branches of IT including programming, and software development. Software Engineers and IT professionals are some of the highest-paid professionals. That being said it is also a profession that keeps evolving to keep up with these updates one has to study continuously. In a similar context, the Java developer is one of the most coveted career options today. This success can be attributed to the versatility of the language itself. Java is a powerful general-purpose language used in web applications, mobile applications, and computer games. 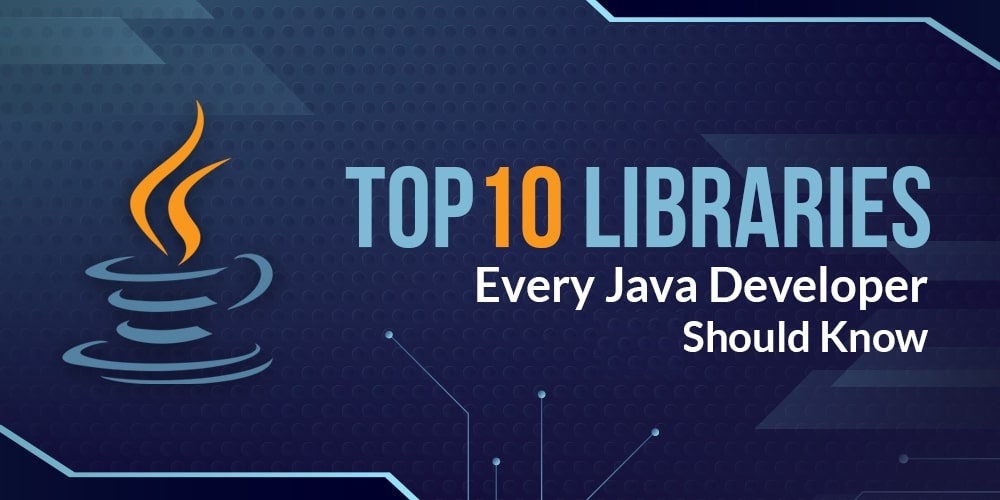 Some of the pros of Java include:

The above-mentioned features make Java one of the most used programming languages with GitHub estimating over 9 million users across the globe. Java developers are required to collaborate with fellow software and web developers to develop app code for Java applications, design, implement, execute and test existing Java applications & code along with brainstorming for better design ideas for software and applications.

Every developer is more or less aware of the benefits of using libraries- eliminating redundancy and thus saving time. For every programming language, there are frameworks and libraries that are fundamental to learning and mastering it. For Java developers looking out for Java libraries to learn and grow, we are listing down the top 10 libraries every Java developer should know.

Java standard library helps students and new Java developers to build a strong base which further helps them to solidify their concepts and learn different third-party libraries efficiently.

Somewhat inferable from the name, Mockito is an open-source mocking framework. Java developers are often expected to be skilled at conducting unit tests. Mockito helps developers to write tests with clean and simple API. It enables developers to test double objects or dummy objects for behavior-driven and test-driven behavior. According to StackOverflow, Mockito was voted as the best mocking framework for Java.

Another unit testing framework, JUnit lets Java programmers create test cases and run unit tests. Unit testing tools are crucial for fixing bugs, which is why mastering unit testing tools becomes imperative. JUnit creates new samples of the test class every time developer runs a test. One important thing to note is that creating test cases independent of each other is important with JUnit since JUnit runs tests randomly, without following a set sequence.

The official site of Apache Commons states Apache Commons as an Apache project aimed at all aspects of reusable Java components, i.e. Java libraries. It is a general-purpose library compromising of various libraries. To name a few-

The above-mentioned list of Apache Commons libraries is non-exhaustive. A Java developer can make use of the plethora of library resources available on Apache Commons without having to refer to another source.

An alternative for Apache Commons, Google Guava is an open-source containing core Java libraries. Guava offers additional advanced features and functions to Java, some of these include new generic classes like multiset and bitmaps, strings, I/O, caches, graph libraries, etc. Guava has consistently been one of the most popular Java libraries.

It is usually classified under three heads, namely-

HttpClient is used to request and retrieve HTTP resources over the network. Java HttpClient supports HTTP/1.1 and HTTP/2. It supports both synchronous and asynchronous programming models. HttpClient is built through a builder and is fixed once set. The Java developer can use it to make multiple requests and gain configuration information and resources for each one of the requests.

Log4j is the most popular logging library for Java. Log4j 2 is an upgrade of Log4j and addresses issues faced in the Log4j framework. It also has a plugin architect that lets developers define and configure custom components. Logging events are imperative and logging libraries help developers to manage these log events. Log4j 2 has more advanced features than Log4j, some of them are:

Software development is seldom limited to one language or platform. A Java developer is expected to integrate databases in Java applications. Database connection pool libraries make this interaction a lot faster to process. DBCP enables developers to pool connections rather than creating individual DB connections for every user. Thus saving valuable time and effort. Apache Commons DBCP 2 is a feature-rich upgrade of DBCP 1.x and has improved performance. It supports JMX and can be used in applications where JDBC resources need to be pooled.

Java Architecture for XML Binding (JAXB) is an XML parsing library, that provides ways to bind XML schemas and Java representation. It offers ways to marshal Java objects into XML data and unmarshal the XML data into Java objects. The Java Standard Library in Java 9 no longer supports XML functionalities. Therefore developers have to use separate libraries like JAXB for it. To list a few of the features of JAXB, these are-

The list is non-exhaustive, there are numerous free and open-source Java libraries present today, each performing different functions. What is important is that a developer should know the most basic and widely used libraries before diversifying into delicate libraries. One can also use alternative libraries for the same functions to compare and learn from each one of them. With new libraries and frameworks developing regularly, Java developers will constantly have to study and learn new things, these libraries are just the beginning!