Top 10 JavaScript Frameworks to Learn in 2021

Considering the reports of several renowned platforms like Stack Overflow and Statista, JavaScript is topping the list of most popular programming languages across the world for the last year 2020, and there are very much positive signs that this particular language will dominate in 2021 as well. The primary reason behind such a huge demand for JavaScript might be its support for both i.e. client-side and server-side development. Though with the rising demand and popularity of JavaScript, there is an availability of numerous enriching JS frameworks as well – and to find out the best framework among all these options is quite a daunting task, especially for beginner developers. 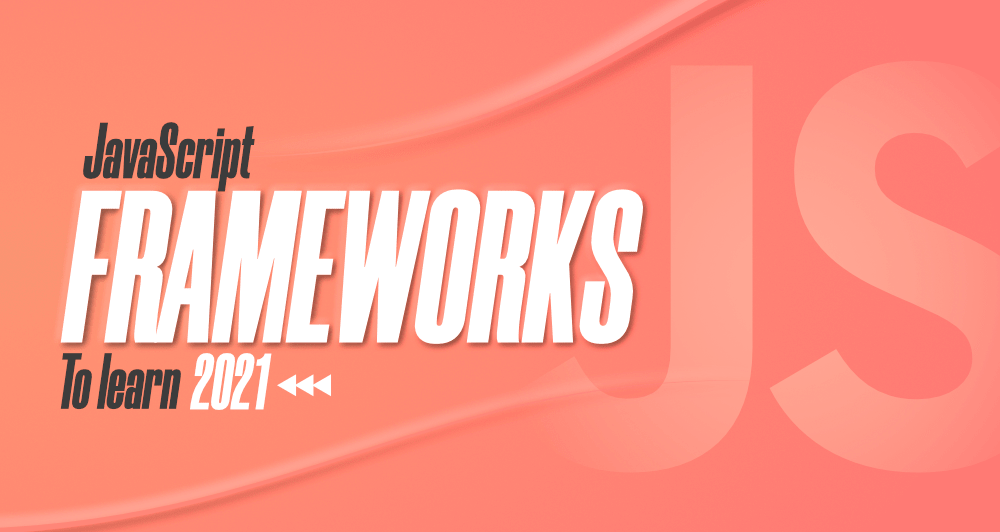 Before moving further, let’s take a look at the question – Why do we need JavaScript Frameworks? In general, JavaScript Frameworks are actually the collection of JS code libraries that provides you with pre-written JavaScript code that can be used for standard programming functions and tasks. It allows you to create websites or web applications efficiently. It saves your time and increases your productivity as you get various pre-written functions in the framework and you’re also not required to worry about other concerns like building everything from scratch, security issues, etc.

Now, let’s get back to the primary concern of finding out a worthwhile JS Framework to start with and that can fulfill all your requirements. To make it easier for you, we’ve compiled a list of several most-popular and recommended JavaScript frameworks, based on various crucial factors and stats, for the year 2021.

Let’s get started with the list of JS frameworks:

Angular, backed by Google, is an open-source front-end web framework that allows JavaScript to get integrated with other web technologies like HTML and CSS. The latest version of Angular is released in the last year 2020 that is based on TypeScript (a superset of JavaScript) and you need to know that more than 400K websites across the world are built with Angular. It enables you to develop native and web applications for desktop & mobile both and it is very much suitable for the development of enterprise web applications.

Besides, Angular follows the MVC (Model-View-Controller) architectural pattern and offers you access to control UI components & their behaviors. In Angular, you can manipulate DOM attributes as per your requirements. The framework is very much popular among the developers because of some remarkable features such as two-way data binding, Angular CLI, directives, built-in dependency injection, virtual scrolling, and many more.

Vue.js, commonly known as Vue, is an open-source JavaScript framework used to build enriching user interfaces. It won’t be wrong to say it is somehow the combination of both – React and Angular framework. For instance, the framework offers Virtual DOM features like React and two-way binding similar to Angular. As Vue is a progressive framework, you can easily integrate it with the existing projects and with other JS libraries. For the year 2020, Vue was the most starred framework at GitHub surpassing Angular and React. And there is a considerable increase of around 18-20% in the number of developers using Vue in the last 3-4 years.

Moreover, it is an MVVM-based (Model-View-View-Model) framework and the core library primarily focuses only on the view layer. Also, the framework supports declarative rendering and component composition. Some of the other prominent features of Vue are – event handling, templates & directives, Vue.js CLI, components, transitions, reactivity focus, and many others.

React, also known as React.js, is an open-source JavaScript library for building Web user interfaces and was originally developed by Facebook. However, you need to know that React is actually not a framework but a front-end library – though it is widely considered as a framework by many developers across the world. React allows you to build reusable UI components and it can be used with other JavaScript libraries. It can be used to develop apps for any kind of UI such as mobile, desktop, or others and is strongly preferred for developing SPA (Single Page Applications) and building enterprise applications. At GitHub, React is the second most starred framework and it has the most forked compared to other frameworks.

React uses the JavaScript extension JSX that makes it easier to combine JavaScript and HTML. Also, it follows the MVC model and provides you with some noticeable features like One-way Data Binding, Virtual DOM, Event handling, etc.

Svelte, developed by Rich Harris, is an open-source front-end JavaScript framework and is written in TypeScript. Svelte compiles the codes to pure JS and it comes up with its own compiler that converts apps into ideal JavaScript at build time instead of doing it at the runtime like other frameworks. In general, it doesn’t inject any overhead code to run when the application is updating the DOM. As a result, the web apps developed using Svelte are generally faster compared to other frameworks.

Svelte provides you with some prominent features such as better speed & performance, less code required, no virtual DOM, and many others. As per the various survey reports, Svelte has all the chances and potential to take over other renowned frameworks like React, Angular, etc. in the coming times. No doubt that Svelte seems to be quite younger but if you’re looking forward to learning a web development framework for the year 2021 – it’d be a great choice for you!

Ember.js is another worthwhile JavaScript web framework that is open-source and is used to develop scalable single-page web apps. Initially, it was known as SproutCore 2.0 framework and is created by Yehuda Katz. Ember.js follows the MVC (Model-View-Controller) architecture pattern and though it is a web framework, you can use it to develop mobile and desktop applications as well. Also, it considers HTML and CSS as the fundamental of its development model and the backend architecture of Ember.js makes it feasible for you to write advanced HTML tags.

Ember.js provides you with a separate data layer, templates or handlebars, an inbuilt testing environment, and numerous other features & functionalities. It comes up with the Glimmer rendering engine that allows you to render DOM elements from the template. The command-line interface of Ember.js allows you to execute tests inside the browser, auto-reloading of components, quick rebuild, etc. Meanwhile, Ember has witnessed a considerable increase in its demand & popularity among the developers in recent times.

Backbone.js is a lightweight JavaScript library that follows the MVC (Model-View-Controller) architecture pattern and is often used to develop Single Page Applications. It allows you to build SPAs and client-side apps that run in web browsers in a structured manner with better flexibility. It offers enormous support for RESTful APIs and it has primarily one core dependency that is the Underscore library. Also, Backbone.js communicates with the help of events that signify that the application won’t get damaged or troubled and the code will be simple, clean, and easy to maintain.

Using Backbone.js can leverage you with various prominent features and functionalities for web application development such as the availability of more than 100 extensions, performing complex functionalities by writing less code, automatic updation of HTML in case of change of model, etc. One more advantage of using Backbone.js is that it allows the developers to select the right tools for the project as per their needs and requirements.

Let’s move to another open-source front-end development framework, Next.js. Next.js is based on react and is very much popular among the developers due to its server-side renderability aspect. It allows you to develop Jamstack and server-based applications by following the best practices for the development. Meanwhile, Next.js primarily supports CSS and styled JSX along with other technologies. Also, Next.js is written in TypeScript, and the JavaScript modules & React components can be imported dynamically in it.

Next.js provides you with some remarkable features such as automated code-splitting, automatic routing, SEO backing, prefetching, and numerous others. Also, there is a Static Exports feature that comes up with the Next.js that allows you to export a completely static site from the application. In the latest version of Next.js, there are various new features and functionalities announced such as redirect support, incremental static regeneration, and many others.

Meteor provides you with several prominent features such as reactive template, hot code reload, effective communication between front-end and back-end server, and many more. If we look at the numbers, there are more than 25000 websites currently active over the web that are using Meteor and the framework is becoming popular among the developers significantly.

Aurelia is another popular open-source front-end JavaScript framework primarily used for developing web, mobile, and desktop applications. The framework is a collection of numerous open-source JavaScript modules, written in ECMAScript and allows you to develop components using plain, vanilla JavaScript or TypeScript. Also, some of these modules can be used particularly in any kind of JS project and it utilizes less memory compared to several other renowned frameworks. Moreover, it can be easily integrated with other third-party libraries or frameworks such as jQuery, Polymer, Bootstrap, etc.

Aurelia comes up with numerous enriching built-in features such as strong data binding, routing, progressive enhancement, dependency injection, and many more. Besides, it provides you with a CLI for developing projects and a browser plugin for debugging as well. In addition, Aurelia is having better community support with a huge number of developers and contributors from all over the world working actively.

Last but not least, here comes Express.js. Express.js, developed by TJ Holowaychuk, is a back-end web development framework for Node.js used to build Web applications and APIs. Express is primarily based on the Sinatra framework and it allows you to develop node-based web applications efficiently. The framework supports MVC (Model-View-Controller) architecture and is quite fast compared to other frameworks. It allows dynamic rendering of HTML Pages and provides you with significant web application features without hiding the Node.js functionalities as well.

In addition, it provides you the routing components, supports middleware, templating, and other features that make web application development more convenient to you. And yes, the framework is very much compatible to connect with the databases like MongoDB, MySQL, etc. Express.js really enjoys strong popularity among the developers mostly because of its minimalistic features.

In the end, you need to know that each framework has its own advantages and disadvantages – hence among all these above-mentioned frameworks, you can pick out the one to start with as per your requirements and convenience!