Thermodynamics has become an integral element of our daily lives. Whether you’re in a car, sitting comfortably in an air-conditioned room, or sipping a cold beverage from the refrigerator, thermodynamics is used practically everywhere, either directly or indirectly.

When “Sadi Carnot” the father of thermodynamics, introduced thermodynamic theorems and cycles, few could have predicted that his ideas would one day play such a pivotal role in the invention of the vehicle, which has become an essential part of our lives. The thermodynamic cycles were further developed by Sterling Diesel, Otto, and Ericson, resulting in more inventions and improvements in automobiles. Before heading towards the Thermodynamic processes first we’ll see some concepts related to thermodynamics.

The branch of science that deals with the transfer of energy from one form to another, as well as the relationship between heat and temperature, energy, and work done, is known as thermodynamics.

In other words, thermodynamics is the branch of science concerned with the study of the combined effects of heat and work on changes in the state of matter governed by thermodynamic principles.

The laws of thermodynamics are used to transfer heat energy linked with chemical reactions into different useable forms. Energy transformation is based on the fact that energy can only be transformed from one form to another and used in many industries. Chemical reactions have energy linked with them, as we all know. The laws of thermodynamics are concerned with energy changes that occur during a reaction, not with the pace at which the reaction occurs.

Thermodynamic System and the Surrounding

A system is defined in thermodynamics as the region of the universe that is being studied and where observations are being made. The environment and the universe interact with one another, and depending on the type of system, matter and energies are exchanged. The classification of a system is entirely dependent on the flow of energy and matter into and out of it. There are two different kinds of systems:

The first law of thermodynamics is the universal law of energy conservation that applies to all systems. “The total heat energy change in every system is the sum of the internal energy change and the work done,” says this law. When a certain amount of heat, dQ, is applied to a system, a portion of it is used to increase internal energy, dU, and a portion is utilized to perform external work, dW, resulting in dQ = dU + dW.

Let’s discuss the following Thermodynamic Processes in depth as follows:

The divergence of a system from its thermodynamic equilibrium in a quasistatic process is infinitesimally small. Equilibrium states are all the states that a system passes through throughout a quasi-static operation.

Consider a system in which gas is enclosed in a cylinder with a moving piston; if the piston is pushed at an endlessly slow rate, the system will remain in a state of quiescence all the time, and the process can be classified as quasi-static.

The temperature of the system remains constant throughout an isothermal process.

Boyle’s law states that the pressure of a given mass of gas varies inversely with its volume when PV=constant. There is no change in temperature in an isothermal process since internal energy for an ideal gas depends only on temperature, hence there is no change in internal energy. As a result, U=0, and Q=W follows from the First Law of Thermodynamics. As a result, heat added (or withdrawn) from the system equals work done by (or on) the system during the isothermal process. Below is a PV diagram for the isothermal process. 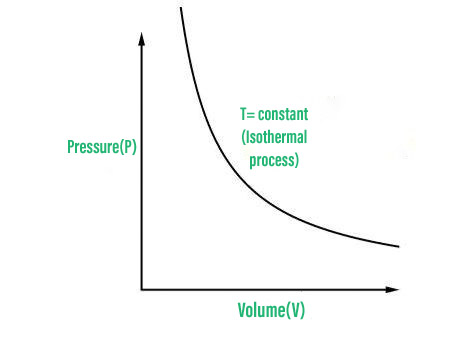 Heat flow can be prevented by covering the system with a thick layer of heat-insulating material such as cork or asbestos. Heat flow takes a certain amount of time, so if a process is completed rapidly, it will be essentially adiabatic. When we apply the first law to an adiabatic process, we get,

If the system performs the task, ΔW is negative. The internal energy of systems reduces, resulting in a temperature drop. The relationship between Pressure and Volume in an adiabatic process with ideal gas is given by,

PV diagram for the adiabatic is, 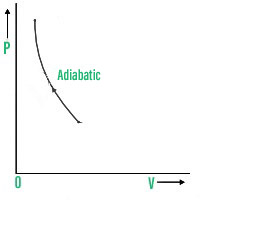 The volume of the system remains uncharged during an isochoric phase, i.e. ΔV = 0.

When the volume does not change, no work is done, ΔW = 0, and so the first law of thermodynamics is violated.

All of the heat delivered to the system has been used to boost the system’s internal energy. The equation linking P, V, and T in an isochoric process yields , P/T=constant i.e. as the temperature rises, the pressure rises. PV diagram of the isochoric process. 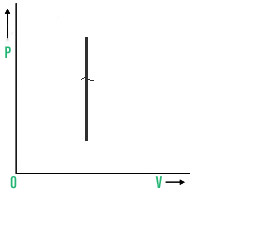 Isobaric process refers to a process that occurs at constant pressure.

We can see from this equation that the work done in the isobaric process is W=P(V2-V1)= n R(T2-T1) where the pressure is maintained at a consistent level. The amount of heat supplied to the system is split between rising temperature and doing work in this process i.e. 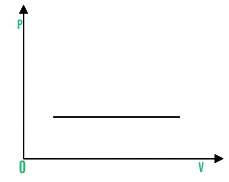 The system returns to its beginning condition in a cyclic process. Since the system has returned to its starting state, there has been no change in internal energy ΔU=0. Here in this process total heat absorbed is equal to total work done by the system i.e.

The PV diagram of the cyclic process can be drawn as, 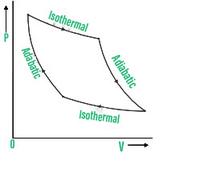 Problem 1: Calculate the number of kilojoules of heat required to raise the temperature of 60 g of aluminium from 35 to 55 degrees Celsius. Aluminium has a molar heat capacity of 24 J mol-1 K-1.

An isolated system has no change in internal energy (∆U) since it does not exchange energy with its surroundings. In the event of a spontaneous reaction, however, entropy tends to grow. As a result, ∆S > 0 or positive.

Problem 3: Write the limitations of Thermodynamics.

Limitations of Thermodynamics are;

Heat is a kind of energy, according to the First Law of Thermodynamics, and thermodynamic processes are therefore subject to the concept of energy conservation. Heat energy cannot be created or destroyed in this way. It can, however, be moved from one spot to another and changed into and out of different types of energy.

The first law of thermodynamics has the following equation:

Problem 5: In a system, the pressure of a gas remains constant. A total of 45 J of heat is lost in the environment around the system. The system receives 450 J of work. What is the internal energy of the system?

We know that equation of first law of motion;

My Personal Notes arrow_drop_up
Previous
Scattering of Light
Next
How do Safety Matches Work?
Recommended Articles
Page :
Thermodynamic State Variables and Equation of State
18, Oct 21
Reversible and Irreversible Processes
07, Feb 22
Redox Reactions and Electrode Processes
08, Feb 22
Equilibrium in Chemical Processes
16, Feb 22
Difference between Reversible and Irreversible Processes
07, Mar 22
Equilibrium in Physical Processes
04, Feb 22
What happens to the wavelength of a wave when frequency increases or decreases?
24, May 22
Refraction Through a Rectangular Glass Slab
23, May 22
Magnetic Declination Formula
23, May 22
Difference between Wavelength and Frequency
23, May 22
Earthworm Anatomy
23, May 22
Levels of Organization in Animals
23, May 22
Article Contributed By :