The rise of IPv6

IP address (Internet Protocol Address) recognizes computers on the Internet. It is a string of digits separated by some delimiter. When your device sends requests on the Internet for some page, it tags your IP address with the request. An IP address is usually based on a real-world location. The purpose of IP is to manage the connection between a device and a target site. There are two versions of ‘IP’ that is currently existing on the internet – IPv4 (IP version 4) and IPv6 (IP version 6). The length of IPv4 and IPV6 is 32 and 128 bits respectively.

ARPANET was the first packet-switching network to deploy the TCP/IP protocol in 1983. IPv4 was the first version used for production. TCP/IP protocol was a breakthrough by which we received the term ‘Internet’, an interconnection of a network. Before that, the major issue faced by the organizations was that ‘Networks could not talk to each other’. Different organizations were connected to different networks and each network used its protocol to send and receive data.

First, a few businesses and universities affirmed the TCP/IP protocol. And now the number has expanded to billions.

This graph is enough to reveal the exponential growth of internet users in the past decades. 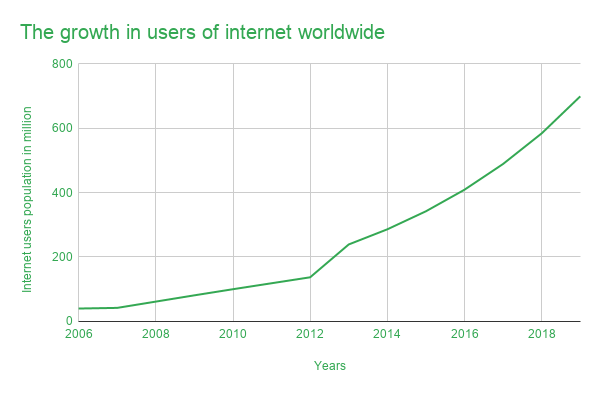 IPv6 consists of 128 bits, which is 4 times that of IPv4. The IPv6 address looks like this- [2405:4034:199:a487:3868:1af7:2241:f4c9]. The number of possible IPv6 addresses is 2127. The number is so large, that even scientists face difficulty describing it. If we count the total number of grains of sand on the Earth, it would be still less. But, the number of grains of sand on multiple planets like-earth can be close to 2127. It’s so large that we expect that we will not face the inadequacy of Ipv6 addresses in the future.