In this article, we are going to see text preprocessing in Python. We will be using the NLTK (Natural Language Toolkit) library here.

We lowercase the text to reduce the size of the vocabulary of our text data.

We can either remove numbers or convert the numbers into their textual representations.
We can use regular expressions to remove the numbers.

We can also convert the numbers into words. This can be done by using the inflect library.

We remove punctuations so that we don’t have different forms of the same word. If we don’t remove the punctuation, then been. been, been! will be treated separately.

We can use the join and split function to remove all the white spaces in a string.

Stopwords are words that do not contribute to the meaning of a sentence. Hence, they can safely be removed without causing any change in the meaning of the sentence. The NLTK library has a set of stopwords and we can use these to remove stopwords from our text and return a list of word tokens.

Input: “This is a sample sentence and we are going to remove the stopwords from this”
Output: [‘This’, ‘sample’, ‘sentence’, ‘going’, ‘remove’, ‘stopwords’]

Stemming is the process of getting the root form of a word. Stem or root is the part to which inflectional affixes (-ed, -ize, -de, -s, etc.) are added. The stem of a word is created by removing the prefix or suffix of a word. So, stemming a word may not result in actual words. 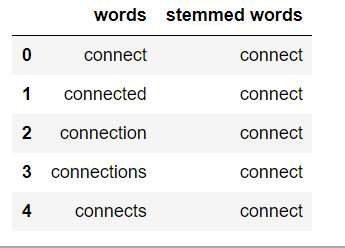 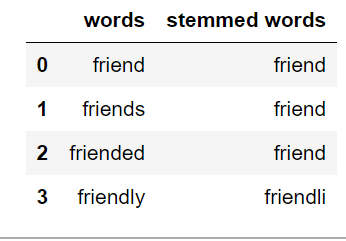 If the text is not in tokens, then we need to convert it into tokens. After we have converted strings of text into tokens, we can convert the word tokens into their root form. There are mainly three algorithms for stemming. These are the Porter Stemmer, the Snowball Stemmer and the Lancaster Stemmer. Porter Stemmer is the most common among them.

Like stemming, lemmatization also converts a word to its root form. The only difference is that lemmatization ensures that the root word belongs to the language. We will get valid words if we use lemmatization. In NLTK, we use the WordNetLemmatizer to get the lemmas of words. We also need to provide a context for the lemmatization. So, we add the part-of-speech as a parameter.