Tertiary Sector And Its Potential

The Indian economy is divided into three sectors i.e. Primary, Secondary and Tertiary. A good performance in all these sectors is essential for India’s economic growth. The primary sector basically acts as the raw material supplier while the secondary sector or also known as the processing or the manufacturing sector turns the material into finished goods. And the tertiary sector provides services to both the primary and secondary sectors of the Economy. The tertiary sector is quite important for the Indian economy as the majority of people in India are employed in this sector.

As per the financial report till 2021 there are more than 128 million people in India are employed in the tertiary sector (service sector). 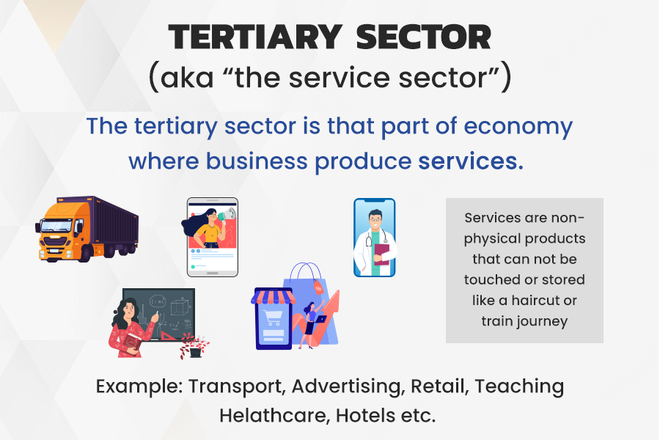 Tertiary Sector and its Potential

What is a Tertiary Sector?

As per the world bank report India holds 7th position globally in highest output from the tertiary industries with an output of more than 1.3 billion USD.

What Kind of Industries Comes under the Tertiary Sector?

Other major industries that come under the tertiary sector are the hospitality industries like hotels, restaurants, and resorts. As the hospitality industry provides food and comfort services which are the basic necessity for the primary and secondary sectors. While on the other hand, many economists believe that financial institutions such as banks and other insurance companies are arguably the most important tertiary sector industries as they finance and safeguard many industries with loans and insurance.

Potential of the Tertiary Sector:

In the last few decades, it has been observed that many economies shifted their focus from the manufacturing sector to the tertiary sector, thus escalating their economic growth.

The Present Condition of the Tertiary Sector in India:

A shift in the government policies can also be observed which primarily focused on the manufacturing industry but currently shifting towards the tertiary sector. In the last 3-4 decades the GOI has launched many policies and schemes for the growth of the tertiary sector in India, thus leading to make India one of the largest tertiary sector economies in the world.

My Personal Notes arrow_drop_up
Previous
Mission Sagar
Next
RBI And Its Functions
Recommended Articles
Page :
Potential GDP and its Determinants and Factors
21, Nov 21
Mining Sector In India And Its Challenges
30, Jun 22
Role of Service Sector in Modern Economic Development of India
14, Sep 21
How Public Sector Contributes to the Economic Development of a Nation?
16, Sep 21
How to Protect Workers in the Unorganized Sector?
27, Sep 21
Government Policies to Meet the Challenges of the Food Processing Sector
21, Nov 21
Challenges of Power Sector of India
23, Dec 21
Schemes For Unorganized Sector
18, Apr 22
Role Of Public Sector In Industrial Development During Planning Decades
16, May 22
Achievements of India’s Industrial Sector Between 1950-1990
14, Sep 21
What is Buffer Stock and its Impact on the Rationing System of India?
27, Sep 21
Deindustrialization in India Before 1947 and its Impact
14, Sep 21
Labour Regulations And Its Effects In India
26, Apr 22
Mid-day Meal Scheme And Its Challenges
01, Jul 22
RBI And Its Functions
03, Jul 22
Causes Of Rupee Falling Against US Dollar And Its Effect
29, Jul 22
Toy Industry in India and its Future
04, Aug 22
SIDBI and its Functions
20, Aug 22
Agritourism and its Future in India
30, Aug 22
Freebies vs Welfare Schemes and its Impact on Economy
30, Aug 22
Unified Payments Interface (UPI) and its Challenges
30, Aug 22
Direct And Indirect Farm Subsidies And MSP
10, May 22
Difference and Relationship Between Foreign Trade and Foreign Investment
21, Feb 22
Money Laundering: Problem and Prevention
23, Mar 22
Article Contributed By :