TCP is known as a connection-oriented protocol, which ensures reliability, and is also responsible for congestion control mechanisms in the network. TCP Tahoe and TCP Reno are two techniques of TCP congestion control, these are used when the sender receives three duplicate acknowledgments.

Tahoe is a lake in the USA. This particular TCP was designed around that lake and hence it was named TCP Tahoe. It was the first TCP variant with in-built congestion control algorithms. When TCP was first designed in 1981, congestion control was not an integral part of it.

Slow Start phase: It lasts until congestion window size reaches up to “Slow Start Threshold (ssthresh)“. The slow start algorithm doubles the congestion window size(cwnd) in one RTT. Initially, ssthresh is set to infinite(∞). Subsequently, it adapts depending on the packet loss events. When cwnd becomes equal to ssthresh, slow start stops. After that AIMD phase takeovers.

AIMD phase: It starts when the slow start stops. Additive Increase increases cwnd by 1 and Multiplicative Decrease reduces ssthresh to 50% of cwnd. Note that cwnd is ‘not’ reduced by 50% but ssthresh. This is the point to note that cwnd again resets to the initial window size (10 in Linux kernel).

Fast Retransmit phase: It is the loss detection algorithm. It is triggered by 3 duplicate acknowledgments. On packet loss detection, it resets cwnd to initcwnd. 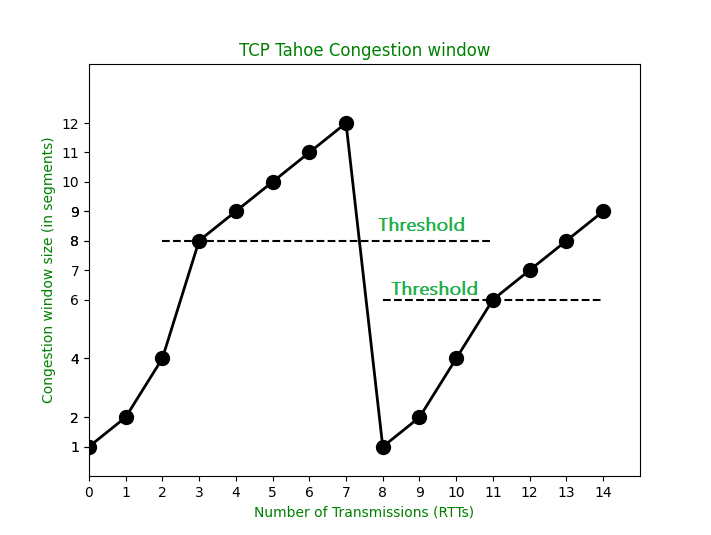 It is the extension of TCP Tahoe.

Since TCP Reno is the extension of TCP Tahoe, the slow start and AIMD phase are the same.

It makes use of both RTO and Fast Retransmit. If the packet loss detection is triggered by 3 duplicate acknowledgments then it is a fast retransmit algorithm in action. On packet loss detection through Fast Retransmit, cwnd is reduced by 50% (cwnd = cwnd/2). 3 duplicate ACKs are received that means network is performing well because ACKs are being received which means packets are getting delivered to the receiver. So, cwnd is reduced by 50% in order to allow the network to come out of congested state. On packet loss detection through RTO, reset cwnd to initcwnd. If the RTO timer expires that means the network is badly congested. So, the cwnd has to be reduced to the initial value in order to recover the network from congestion. 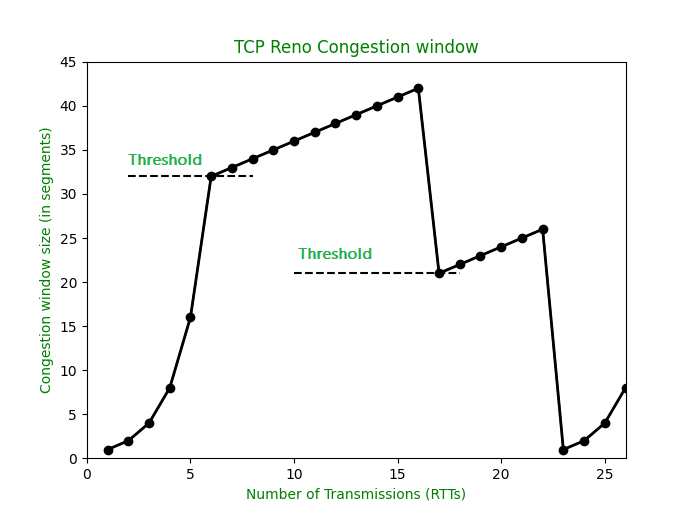 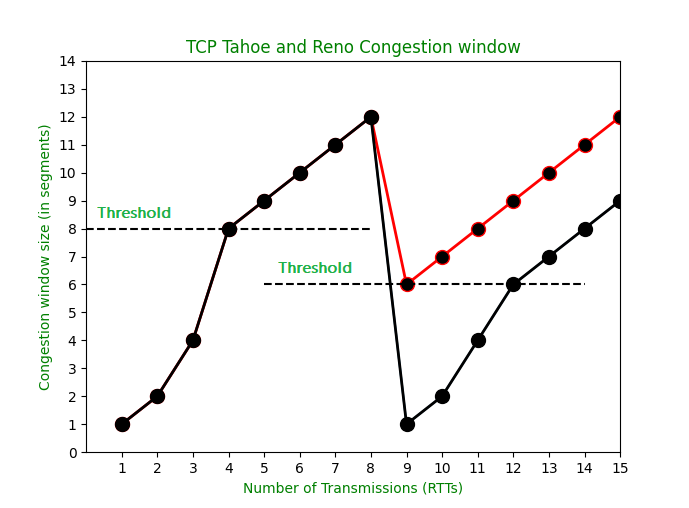