The system is subjected to real-time, i.e. response should be guaranteed within a specified timing constraint or system should meet the specified deadline. For example flight control systems, real-time monitors, etc.

There are two types of tasks in real-time systems:

Hyper period of a set of periodic tasks is the least common multiple of periods of all the tasks in that set. For example, two tasks T1 and T2 having period 4 and 5 respectively will have a hyper period, H = lcm(p1, p2) = lcm(4, 5) = 20. The hyper period is the time after which pattern of job release times starts to repeat.

Precedence Constraint of Jobs: Jobs in a task are independent if they can be executed in any order. If there is a specific order in which jobs in a task have to be executed then jobs are said to have precedence constraints. For representing precedence constraints of jobs a partial order relation < is used. This is called precedence relation. A job Ji is a predecessor of job Jj if Ji < Jj i.e. Jj cannot begin its execution until Ji completes. Ji is an immediate predecessor of Jj if Ji < Jj and there is no other job Jk such that Ji < Jk < Jj. Ji and Jj are independent if neither Ji < Jj nor Jj < Ji is true.
An efficient way to represent precedence constraints is by using a directed graph G = (J, <) where J is the set of jobs. This graph is known as the precedence graph. Jobs are represented by vertices of the graph and precedence constraints are represented using directed edges. If there is a directed edge from Ji to Jj then it means that Ji is the immediate predecessor of Jj. For example: Consider a task T having 5 jobs J1, J2, J3, J4, and J5 such that J2 and J5 cannot begin their execution until J1 completes and there are no other constraints.

The precedence constraints for this example are:
J1 < J2 and J1 < J5 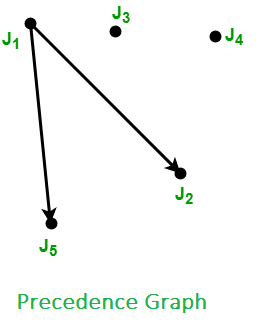 From the above graph, we derive the following precedence constraints: