In this blog, we will discuss how to design a URL shortener service but before we go further we want you to read the article “How to Crack System Design Round in Interviews?”. It will give you an idea that what this round looks like, what you are expected to do in this round and what mistakes you should avoid in front of the interviewer. Also, the Geeksforgeeks System Design – Live course will also help you ace the interview by providing you with the optimized approach to solve questions and relate them with real-life examples.

We get the result given below:

A lot of candidates might be thinking that designing this service is not difficult. When a user gives a long URL converts it into a short URL and updates the database and when the user hits the short URL then search the short URL in the database, get that long URL, and redirect the user to the original URL. Is it really simple? Absolutely not if we think about the scalability of this service.
When you’re asked this question in your interviews don’t jump into the technical details immediately. Most of the candidates make mistakes here and immediately they start listing out some bunch of tools, databases, and frameworks. In this kind of question, the interviewer wants a high-level design idea where you can give the solution for the scalability and durability of the service.
Let’s start by talking about the requirement first…

Before you jump into the solution always clarify all the assumptions you’re making at the beginning of the interview. Ask questions to identify the scope of the system. This will clear the initial doubt, and you will get to know what specific detail the interviewer wants to consider in this service.

Discuss the data capacity model to estimate the storage of the system. We need to understand how much data we might have to insert into our system. Think about the different columns or attributes that will be stored in our database and calculate the storage of data for five years. Let’s make the assumption given below for different attributes…

MD5 Encoding: MD5 also gives base62 output but the MD5 hash gives a lengthy output which is more than 7 characters. MD5 hash generates 128-bit long output so out of 128 bits we will take 43 bits to generate a tiny URL of 7 characters. MD5 can create a lot of collisions. For two or many different long URL inputs we may get the same unique id for a short URL and that could cause data corruption. So we need to perform some checks to ensure that this unique id doesn’t exist in the database already.

We can use RDBMS which uses ACID properties but you will be facing the scalability issue with relational databases. Now if you think you can use sharding and resolve the scalability issue in RDBMS then that will increase the complexity of the system. There are 30M active users so there will be conversions and a lot of Short URL resolution and redirections. Read and write will be heavy for these 30M users so scaling the RDBMS using shard will increase the complexity of the design when we want to have our system in a distributed manner. You may have to use consistent hashing to balance the traffics and DB queries in the case of RDBMS and which is a complicated process. So to handle this amount of huge traffic on our system relational databases are not fit and also it won’t be a good decision to scale the RDBMS.
Now let’s talk about NoSQL!

The only problem with using the NoSQL database is its eventual consistency. We write something and it takes some time to replicate to a different node but our system needs high availability and NoSQL fits this requirement. NoSQL can easily handle the 30M of active users and it is easy to scale. We just need to keep adding the nodes when we want to expand the storage.

Let’s discuss the mapping of a long URL into a short URL in our database. Assume we generate the Tiny URL using base62 encoding then we need to perform the steps given below…

You can’t maintain a single counter and returns the output to all the servers. To solve this problem we can use multiple internal counters for multiple servers which use different counter ranges. For example server 1 ranges from 1 to 1M, server 2 ranges from 1M to 10M, and so on. But again we will face a problem i.e. if one of the counters goes down then for another server it will be difficult to get the range of the failure counter and maintain it again. Also if one counter reaches its maximum limit then resetting the counter will be difficult because there is no single host available for coordination among all these multiple servers. The architecture will be messed up since we don’t know which server is the master or which one is a slave and which one is responsible for coordination and synchronization.

Solution: To solve this problem we can use a distributed service Zookeeper to manage all these tedious tasks and to solve the various challenges of a distributed system like a race condition, deadlock, or particle failure of data. Zookeeper is basically a distributed coordination service that manages a large set of hosts. It keeps track of all the things such as the naming of the servers, active servers, dead servers, and configuration information of all the hosts. It provides coordination and maintains the synchronization between the multiple servers.
Let’s discuss how to maintain a counter for distributed hosts using Zookeeper. 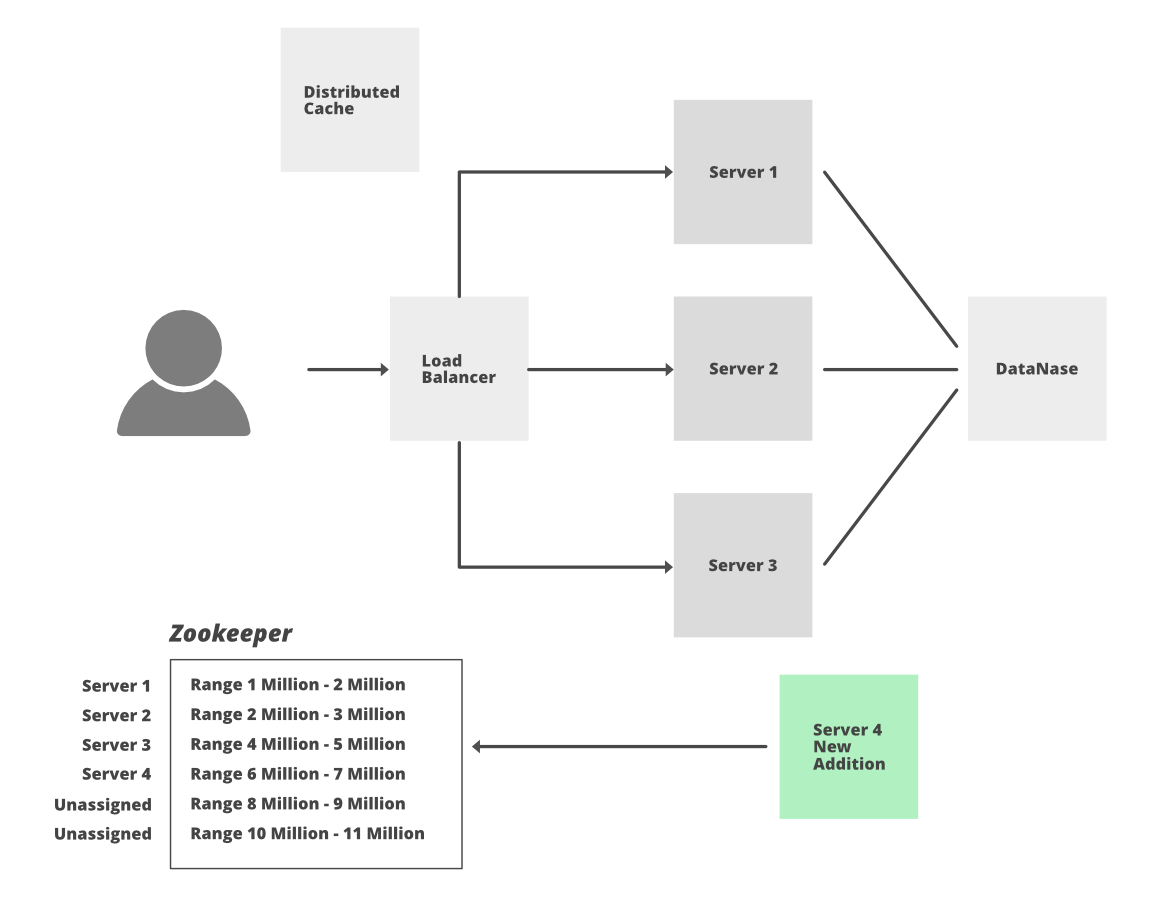