Strings in C++ and How to Create them?

Strings in C++ are used to store text or sequence of characters. In C++ strings can be stored in one of the two following ways: 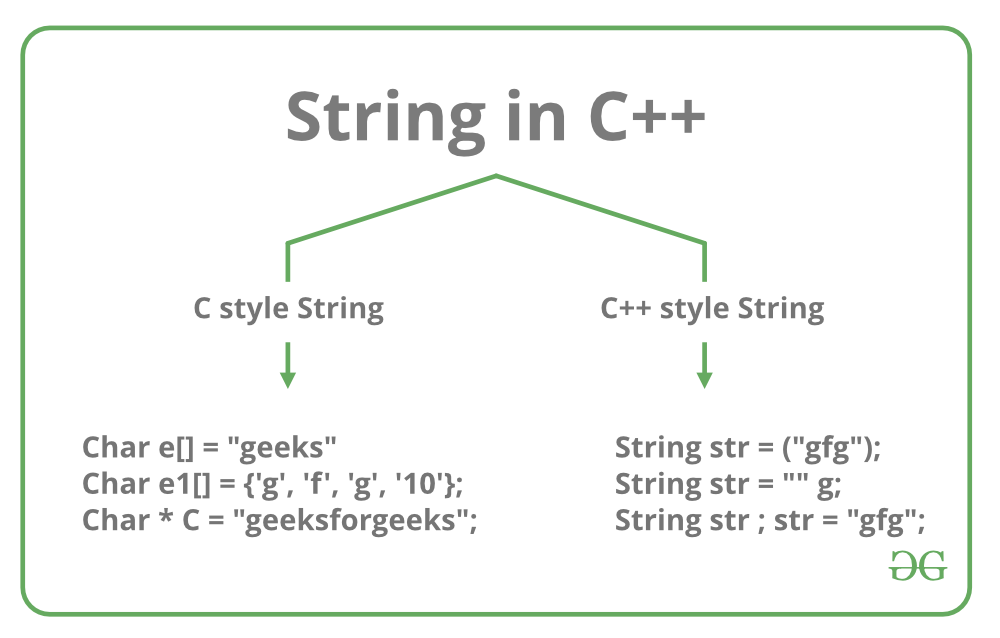 Each of the above methods is discussed below:

My Personal Notes arrow_drop_up
Previous
Arrays in C/C++
Next
Pointers in C/C++ with Examples
Recommended Articles
Page :
Smart Pointers in C++ and How to Use Them
08, Jun 14
Problem in comparing Floating point numbers and how to compare them correctly?
15, Jan 20
Modify array of strings by replacing characters repeating in the same or remaining strings
15, Mar 21
Array of Strings in C++ - 5 Different Ways to Create
20, Jan 17
How to convert C style strings to std::string and vice versa?
22, Jul 16
Arrays and Strings in C++
05, May 20
Difference between concatenation of strings using (str += s) and (str = str + s)
11, Jan 22
When Does Compiler Create Default and Copy Constructors in C++?
30, Jul 13
How to write long strings in Multi-lines C/C++?
09, May 15
Output of C++ programs | Set 29 (Strings)
15, Jun 17
C++ Program to concatenate two strings using Operator Overloading
12, Nov 18
<strings> library in C++ STL
26, Feb 18
Count of sub-strings that are divisible by K
21, Jan 19
Check whether two strings are equivalent or not according to given condition
12, Feb 19
Generate all the binary strings of N bits
12, Mar 19
C++ program to compare two Strings using Operator Overloading
02, Aug 19
Check whether two strings are anagrams of each other using unordered_map in C++
02, Aug 19
C++ Program to Check if strings are rotations of each other or not | Set 2
04, Dec 21
Processing strings using std::istringstream
06, May 20
Print all strings from given array that can be typed using keys from a single row of a QWERTY keyboard
23, Nov 20
How to insert data in the map of strings?
11, Dec 20
Count Distinct Strings present in an array using Polynomial rolling hash function
09, Dec 20
C++ Program to Find Minimum circular rotations to obtain a given numeric string by avoiding a set of given strings
22, Dec 21
C++ Program for Minimum move to end operations to make all strings equal
30, Dec 21
Article Contributed By :