A solid is assumed to be a rigid body, but in real life, no body is perfectly rigid. All the solids change their shape when force is applied to them. For example, whenever a spring is compressed. The spring changes its size but comes back to its original position as soon as the force is removed. This property of solids is called elasticity and the deformation which is caused in this process is called elastic deformation. Some materials do not exhibit elastic properties. For example, if a force is applied to a puddle of mud, it just changes its shape without resistance. These bodies are called plastic and the property is called plasticity. Let’s study elastic bodies and elasticity in detail.

Let F be the magnitude of the force applied on the body and A be the area,

Stress can be classified into three categories. Consider an example to understand how forces act in these stresses:

Whenever forces are applied such that they cause stress in the material. These forces bring changes in the dimension of the object. Strain is the ratio of change in dimension to the original dimension.  For example, in the previous case of a cylinder, different kinds of stress bring about different changes in the dimensions of the cylinder. In the case of compressive or tensile stress, the length of the cylinder is changed. Let

be the change in length of the cylinder and L be the original length. This is called longitudinal strain. It is given by,

In the case of shearing stress,

is the angular displacement of the cylinder from its mean position.

When hydraulic stress is applied, the body changes its volume. In this case, volumetric strain is used.

Stress and Strain take different forms based on the way forces are applied to the body. In the case where the deformation is small, Hooke’s law is applicable. Hooke’s law is based on empirical evidence and is valid for almost all the materials. However, this law is only applicable for small displacements.

According to Hooke’s law,

“For small deformations, the stress and the strain produced in the body are directly proportional to each other.”

Here, k is the proportionality constant and is called the modulus of elasticity.

Relationships between stress and strain can be plotted on a graph for most of the materials. In this experiment, the force is gradually increased, and it produces the strain. The values of the stress and the strain are plotted on a graph. This graph is called the stress-strain curve. These curves vary from material to material and are very helpful in giving a fair idea of how the material performs in different load conditions. 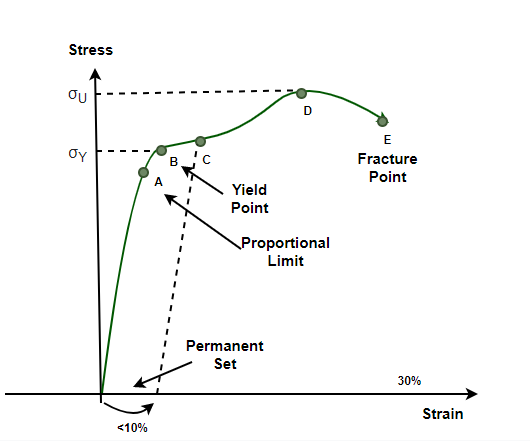 In the graph, it can be seen that from O to A the graph is almost a straight line. This means that the proportionality law or Hooke’s law is obeyed in this region. Point A is called the proportionality limit. The graph does not obey Hooke’s law after this point. In the region between A and B, the law is not obeyed, but the body still comes back to its original shape after being deformed. Point B is called yield limit and the corresponding stress is called yield strength. After this, if the stress is increased, the body doesn’t come back to its original position. This deformation is said to be plastic deformation.

Question 1: A steel rod of 1 m increases by a length of 10cm when tensile stress is applied. Find the longitudinal strain.

Longitudinal strain is given by the ratio of change in length with the total original length.

Let the original length be L, and the change in length be

Plugging the values into the equation,

Question 2: A steel ball of radius 1.5m shrinks in size to a length of 1.4m when hydraulic stress is applied. Find the volumetric strain.

Volumetric strain is given by,

The volume of a sphere is given by,

Question 3: A cube of side 1 m shrinks in size to a length of 0.5 m when hydraulic stress is applied. Find the volumetric strain.

Volumetric strain is given by,

The volume of a sphere is given by, A

Compressive stress is given by,

Compressive stress is given by,

The side is given as 2 m

Question 6: The axis of a cylindrical rod moves by 30° when a force is applied horizontally. The length of the cylinder is 0.5m.  Find the shearing strain and the displacement of the cylinder from its mean position.

The shearing strain is given by,

Let the displacement be x,

My Personal Notes arrow_drop_up
Previous
How to Create a Bar Chart in Excel?
Next
Electric Potential Due to System of Charges
Recommended Articles
Page :
How to Draw Smooth Curve Through Multiple Points using JavaScript ?
26, Mar 20
How to Create a Curve Text using CSS3/Canvas ?
31, May 20
How to Plot a Smooth Curve in Matplotlib?
01, Feb 21
How to Make a Bell Curve in Python?
23, Feb 21
How to Make a Bell Curve in R?
23, Feb 21
Cumulative frequency curve
01, Mar 21
How to do exponential and logarithmic curve fitting in Python?
15, Apr 21
Curve Sketching
28, Apr 21
Fit Smooth Curve to Plot of Data in R
13, May 21
Overlay Histogram with Fitted Density Curve in R
15, Jun 21
Curve Fitting in R
16, Dec 21
How to Plot a Logistic Regression Curve in R?
01, Jan 22
Article Contributed By :